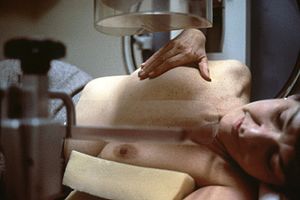 Mammography is a technique for the detection of breast cancer. In this procedure, several X-ray views are taken of one or both breasts and the radiographs are examined for the presence of a lesion. When a lesion is detected, the radiologist often can determine quite accurately whether it is malignant or benign. Mammography is important because very small, early cancers can be diagnosed with this technique before they are large enough to palpate. Mammograms of the opposite breast should be recorded as well as those of the involved breast. The findings of a mammographic examination will be reported on an x-ray report.

How does it work?

During a mammogram, a patient’s breast is placed on a flat support plate and compressed with a parallel plate called a paddle. An x-ray machine produces a small burst of x-rays that pass through the breast to a detector located on the opposite side. The detector can be either a photographic film plate, which captures the x-ray image on film, or a solid-state detector, which transmits electronic signals to a computer to form a digital image. The images produced are called mammograms.

On a film mammogram, low density tissues, such as fat, appear translucent (i.e. darker shades of gray approaching the black background)., whereas areas of dense tissue, such as connective and glandular tissue or tumors, appear whiter on a gray background. In a standard mammogram, both a top and a side view are taken of each breast, although extra views may be taken if the physician is concerned about a suspicious area of the breast.

A radiologist will carefully examine a mammogram to search for high density regions or areas of unusual configuration that look different from normal tissue. These areas could represent many different types of abnormalities, including cancerous tumors, non-cancerous masses called benign tumors, fibroadenomas, or complex cysts. Radiologists look at the size, shape, and contrast of an abnormal region, as well as the appearance of the edges or margins of such an area, all of which can indicate the possibility of malignancy (i.e. cancer). They also look for tiny bits of calcium, called microcalcifications, which show up as very bright specks on a mammogram. While usually benign, sites of microcalcifications may occasionally signal the presence of a specific type of cancer. If a mammogram shows one or more suspicious regions that are not definitive for cancer, the radiologist may order additional mammogram views, with or without additional magnification or compression, or they may order a biopsy. Another alternative may be referral for another type of non-invasive imaging study. 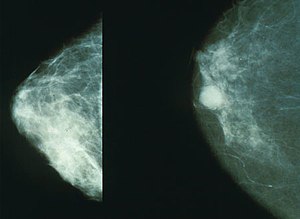 Why does the breast need to be compressed?

Compression holds the breast in place to minimize blurring of the x-ray image that can be caused by patient motion. Also, compression evens out the shape of the breast so that the x-rays can travel through a shorter path to reach the detector. This reduces the radiation dose and improves the quality of the x-ray image. Finally, compression allows all the tissues to be visualized in a single plane so that small abnormalities are less likely to be obscured by overlying breast tissue.

What is digital mammography?

A digital mammogram uses the same x-ray technology as conventional mammograms, but instead of using film, solid-state detectors are used to record the x-ray pattern passing through the breast. These detectors convert the x-rays that pass through them into electronic signals that are sent to a computer. The computer then converts these electronic signals into images that can be displayed on a monitor and also stored for later use. Several advantages of using digital mammography over film mammography include: the ability to manipulate the image contrast for better clarity, the ability to use computer-aided detection of abnormalities, and the ability to easily transmit digital files to other experts for a second opinion. In addition, digital mammograms may decrease the need for the re-takes, which are common with film mammography due to incorrect exposure techniques or problems with film development. As a result, digital mammography can lead to lower x-ray exposures. To date, there is no evidence that digital mammography is better that film mammography for reducing a woman’s risk of dying from breast cancer, however, digital screening may be more accurate for finding cancers in younger women or women with dense breasts. Read more on the National Cancer Institute’s webpage on mammograms.

What is tomosynthesis (3D mammography)?

Digital Breast Tomosynthesis, also known as 3D mammography, is an FDA-approved method for breast cancer screening in which x-rays of the breast are taken at different angles to generate thin cross-sections.  The 3D representation of the breast is similar to the 3d images created by standard CT technology. Tomosynthesis differs from CT technology in that significantly fewer x-ray beams are projected through the breast than with CT and the x-ray exposure to the rest of the chest is dramatically reduced. Hence, the radiation dose delivered to the breast by tomosynthesis is similar to that delivered 2D mammography. While tomosynthesis uses very low-dose x-rays, it is currently most often used in addition to 2D mammography, making the total radiation dose higher than standard mammography. Early evaluations of 3D mammography suggest an improved detection of breast cancers than seen with 2D mammography, but extensive large-scale comparisons of tomosynthesis with 2D mammography in randomized studies are still in process. Therefore, researchers do not know with full certainty whether 3D mammography is better or worse than standard mammography at avoiding false-positive results and identifying early cancers in all types of patients.

What are the limits of mammography?

For certain types of breasts, mammograms can be difficult to interpret.  This is because there is a wide variation in breast tissue density among women. Denser breasts are more difficult to image, and more difficult to assess for tumor diagnosis.  For this and other reasons, the sensitivity of mammography in detecting cancer can vary over a wide range.

For many difficult cases, x-ray mammography alone may not be sufficiently sensitive or accurate in detecting cancer, so additional imaging technologies, such as ultrasound or magnetic resonance imaging (MRI) may also be used to increase the sensitivity of the exam. Recently, studies have shown that a type of nuclear medicinecalled molecular breast imaging (MBI) may be an effective and less expensive alternative to MRI for clarifying test results in patients with dense breasts. During MBI, patients are given an injection of radioactive molecules that are selectively taken up by cancer cells. Special cameras that detect radioactivity are then used to reveal these cancer cells in the breast tissue.

Because mammography uses x-rays to produce images of the breast, patients are exposed to a small amount of ionizing radiation. For most women, the benefits of regular mammograms outweigh the risks posed by this amount of radiation. The risk associated with this dose appears to be greater among younger women (under age 40). However, in some cases, the benefits of using mammography to detect breast cancer under age 40 may outweigh the risks of radiation exposure. For example, a mammogram may reveal that a suspicious mass is benign and, therefore, doesn’t need to be treated.  Additionally, if a tumor is malignant and is caught early by mammogram, a surgeon may be able to remove it before it spreads and requires more aggressive treatment such as chemotherapy.

When should I get a mammogram?

Several organizations and professional societies have developed guidelines for mammography screening. You can read more about these recommendations on their websites below. All recommend that women talk with their doctor about the benefits and potential harms of mammography, when to start screening, and how often to be screened.

Help WikiMD:Join WikiMD as an an editor and help improve the page Mammography or others.
Other languages:
English

Quick links: Medicine Portal | Encyclopedia‏‎‏‎ | Gray's Anatomy‏‎ | Topics‏‎ |‏‎ Diseases‏‎ | Drugs | Wellness | Obesity‏‎ | Metabolic syndrome | Weight loss*
Disclaimer: The entire contents of WIKIMD.ORG are for informational purposes only and do not render medical advice or professional services. If you have a medical emergency, you should CALL 911 immediately! Given the nature of the wiki, the information provided may not be accurate, misleading and or incorrect. Use the information on this wiki at your own risk! See full Disclaimer.
Link to this page: <a href="http://www.wikimd.org/wiki/Mammography">Mammography</a>