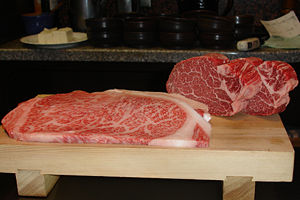 Marbled meat is meat, especially red meat, that contains various amounts of intramuscular fat, giving it an appearance similar to a marble pattern.

Marbling can be influenced by selective breeding. Cattle breeds such as Angus, Murray Grey, Shorthorns, and Wagyū, also the British White type cattle and dairy breeds, such as the Jersey, Holstein-Friesian, and Braunvieh have higher marbling scores on average versus other cattle such as Simmentals, Charolais, or Chianina.[citation needed]

Marbling can also be influenced by time on feed and type of feed. The longer a pen of beef cattle are on feed in the feedlot, the higher the chance they will grade higher on quality scores, but will have much lower yield grades (percentage of carcass lean to fat ratio). Feeding a high amount of cereal grains, such as corn or barley, will change the color of the carcass fat from a yellowish to a white, plus increase the chance of obtaining a higher quality grade according to the USDA. It can be risky to feed a cattle too much grain to increase marbling, because it can cause excessive flatulence. Cattle are ruminants; their stomachs are better at digesting grass, not grain. To increase marbling and rapidly increase weight gain, "the contemporary beef cow is being selected for the ability to eat large quantities of corn and efficiently convert it to protein without getting too sick."[1]

The United States Department of Agriculture's grading system, which has been designed to reward marbling, has eight different grades; Prime, Choice, Select, Standard, Commercial, Utility, Cutter and Canner. Prime has the highest marbling content when compared to other grades, and is capable of fetching a premium at restaurants and supermarkets. Choice is the grade most commonly sold in retail outlets, and Select is sold as a cheaper, but still nutritious, option in many stores. Prime, Choice, Select and Standard are commonly used in the younger cattle (under 42 months of age), and Commercial, Utility, Canner and Cutter are used in older cattle carcasses which are not marketed as wholesale beef "block" meat, but as material used in ground products and cheaper steaks for family restaurants.[2]

Quick links: Medicine Portal | Encyclopedia‏‎‏‎ | Gray's Anatomy‏‎ | Topics‏‎ |‏‎ Diseases‏‎ | Drugs | Wellness | Obesity‏‎ | Metabolic syndrome | Weight loss*
Disclaimer: The entire contents of WIKIMD.ORG are for informational purposes only and do not render medical advice or professional services. If you have a medical emergency, you should CALL 911 immediately! Given the nature of the wiki, the information provided may not be accurate, misleading and or incorrect. Use the information on this wiki at your own risk! See full Disclaimer.
Link to this page: <a href="http://www.wikimd.org/wiki/Marbled_meat">Marbled meat</a>