Mucopolysaccharidosis II (MPS II) is an inherited disorder of carbohydrate metabolism that occurs almost exclusively in males. It is characterized by distinctive facial features, a large head, hydrocephalus, enlargement of the liver and spleen (hepatosplenomegaly), umbilical or inguinal hernia, and hearing loss. Individuals with this condition may additionally have joint deformities and heart abnormalities involving the valves.

MPS II is caused by mutations in the IDS gene. The IDS gene provides instructions for producing the I2S enzyme, which is involved in the breakdown of large sugar molecules called ppglycosaminoglycans[[ (GAGs). GAGs were originally called mucopolysaccharides, which is where this condition gets its name. Mutations in the IDS gene reduce or completely eliminate the function of the I2S enzyme. Lack of I2S enzyme activity leads to the accumulation of GAGs within cells, specifically inside the lysosomes. Lysosomes are compartments in the cell that digest and recycle different types of molecules. Conditions that cause molecules to build up inside the lysosomes, including MPS II, are called lysosomal storage disorders. The accumulation of GAGs increases the size of the lysosomes, which is why many tissues and organs are enlarged in this disorder. Researchers believe that the GAGs may also interfere with the functions of other proteins inside the lysosomes and disrupt the movement of molecules inside the cell. 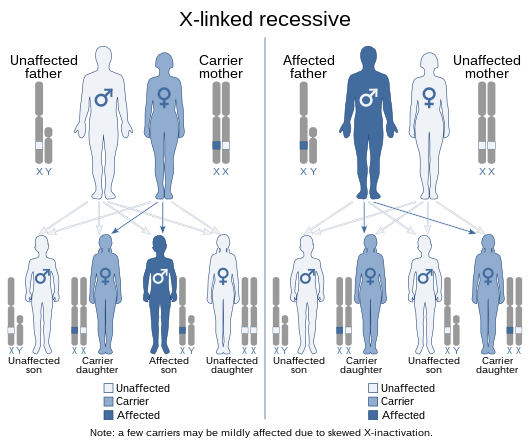 This condition is inherited in an X-linked recessive pattern. The gene associated with this condition is located on the X chromosome, which is one of the two sex chromosomes. In males (who have only one X chromosome), one altered copy of the gene in each cell is sufficient to cause the condition. In females (who have two X chromosomes), a mutation would have to occur in both copies of the gene to cause the disorder. Because it is unlikely that females will have two altered copies of this gene, males are affected by X-linked recessive disorders much more frequently than females. A characteristic of X-linked inheritance is that fathers cannot pass X-linked traits to their sons.

There is a wide range in severity of symptoms present in individuals with MPS II. Previously, MPS II was classified as severe and attenuated based on severity. More recently, the terms slowly progressive and early progressive have been suggested. While both types affect many different parts of the body, people with the severe type also experience a decline in intellectual function and a more rapid disease progression. The life expectancy for people with the severe type is 10 to 20 years. Individuals with the less severe type typically live into adulthood and intelligence is not affected. Treatment is focused on managing the signs and symptoms present in each individual.

The first laboratory screening test for an MPS disorder is a urine test for GAGs. Abnormal values indicate that an MPS disorder is likely. The urine test can occasionally be normal even if the child actually has an MPS disorder. A definitive diagnosis of Hunter syndrome is made by measuring I2S activity in serum, white blood cells, or fibroblasts from skin biopsy. In some people with Hunter syndrome, analysis of the I2S gene can determine clinical severity. carrier testing for MPS II is available. Testing usually begins with an affected male relative, if one is available for testing, to determine the disease-causing mutation. If there is not living affected male relative, testing possible female carriers involves a type of genetic testing called sequence analysis. This test requires a small blood sample and reads through the genetic code of the IDS gene looking for errors. If a mutation is not found using sequence analysis, then two other tests can be performed to look for mutations that cause MPS II. Genetic testing detects most of the mutations that cause MPS II, but may not detect all mutations that cause this condition Therefore, testing cannot definitively determine that a person is not a carrier for MPS II.

Until recently, there was no effective therapy for MPS II. Because of this, palliative care was used. However, recent advances have led to medications which can improve survival and well-being in people with MPS II.

Idursulfase, a purified form of the missing lysosomal enzyme, underwent clinical trial in 2006 and was subsequently approved by the United States Food and Drug Administration as an enzyme replacement treatment for Hunter syndrome. Idursulfase beta, another enzyme replacement treatment, was approved in Korea by the Ministry of Food and Drug Safety.

In February 2019, medical scientists working with Sangamo Therapeutics, headquartered in Richmond, California, announced the first ever "in body" human gene editing therapy to permanently alter DNA - in a patient with Hunter Syndrome.

Earlier onset of symptoms is linked to a worse prognosis. For children who exhibit symptoms between the ages of 2 to 4, death usually occurs by the age of 15 to 20 years. The cause of death is usually due to neurological complications, obstructive airway disease, and cardiac failure. If patients have minimal neurologic involvement, they may survive into their 50s or beyond.

There are estimated to be approximately 2,000 people afflicted with Hunter syndrome worldwide, 500 of whom live in the United States.

Help WikiMD:Join WikiMD as an an editor and help improve the page Mucopolysaccharidosis type II or others.

Quick links: Medicine Portal | Encyclopedia‏‎‏‎ | Gray's Anatomy‏‎ | Topics‏‎ |‏‎ Diseases‏‎ | Drugs | Wellness | Obesity‏‎ | Metabolic syndrome | Weight loss*
Disclaimer: The entire contents of WIKIMD.ORG are for informational purposes only and do not render medical advice or professional services. If you have a medical emergency, you should CALL 911 immediately! Given the nature of the wiki, the information provided may not be accurate, misleading and or incorrect. Use the information on this wiki at your own risk! See full Disclaimer.
Link to this page: <a href="http://www.wikimd.org/wiki/Mucopolysaccharidosis_type_II">Mucopolysaccharidosis type II</a>