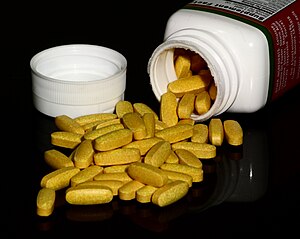 Multivitamins contain multiple micronutrients, such as vitamins and dietary minerals.

A multivitamin is a preparation intended to be a dietary supplement with vitamins, dietary minerals, and other nutritional elements. Such preparations are available in the form of tablets, capsules, pastilles, powders, liquids, and injectable formulations. Other than injectable formulations, which are only available and administered under medical supervision, multivitamins are recognized by the Codex Alimentarius Commission (the United Nations' authority on food standards) as a category of food.[1]

Multivitamin supplements are commonly provided in combination with dietary minerals. A multivitamin/mineral supplement is defined in the United States as a supplement containing 3 or more vitamins and minerals that does not include herbs, hormones, or drugs, where each vitamin and mineral is included at a dose below the tolerable upper level, as determined by the Food and Drug Board, and does not present a risk of adverse health effects.[2] The terms multivitamin and multimineral are often used interchangeably. There is no scientific definition for either.[3]

In otherwise healthy people, some scientific evidence indicates that multivitamin supplements do not prevent cancer, heart disease, or other ailments. However, there may be specific groups of people who may benefit from multivitamin supplements (for example, people with poor nutrition or at high risk of macular degeneration).[4][5] According to the Harvard School of Public Health: "Looking at all the evidence, the potential health benefits of taking a standard daily multivitamin seem to outweigh the potential risks for most people."[6]

Many multivitamins are formulated or labeled to differentiate consumer sectors, such as prenatal, children, mature or 50+, men's, women's, diabetic, or stress. Consumer multivitamin formulas are available as tablets, capsules, bulk powder, or liquid. Most multivitamins are intended to be taken once or twice per day, although some formulations are designed for consumption 3–7 or more times per day.

Compositional variation amongst brands and lines allows substantial consumer choices. Modern multivitamin products roughly classify into RDA (recommended dietary allowance) centric multivitamins with or without iron, RDA centric multivitamin/multimineral formulas with or without iron, higher potency formulas with mostly above RDA components with or without iron, and more specialized formulas by condition, such as for diabetics or by less common components, such as diversified antioxidants, herbal extracts, or premium[clarification needed] vitamin and mineral forms. Legally, the United States Food and Drug Administration allows a multivitamin to be called "high potency" if at least two-thirds of its nutrients have at least 100 percent of the DV. In practice, "high potency" usually means substantially increased vitamins C and B, with some other enhanced vitamin and mineral levels, though some minerals may still be much less than DV.

Some components are typically much lower than RDA amounts, often for cost reasons.[citation needed] For example, biotin, usually the most expensive vitamin component, at over $4000 per active pound, is typically added in at only 5%-30% of RDA in many one per day formulations. Biotin is required to be present at 100% of the value of the B-vitamins for them to be absorbed by the body. Any B-vitamins that cannot be absorbed due to a lack of biotin are eliminated by the body. Likewise, boron and magnesium are considered essential for the bioavailability and absorption of Vitamin D and calcium. Sometimes low content composition is for population subgroups, where the RDA would be inappropriate. Iron is needed in larger amounts by menstruating women, but some percentage of HFE variant gene bearing males are at risk for hemochromatosis. Normal dietary intakes also vary by population, indicating different levels of supplementation.

For certain people, particularly the elderly, supplementing the diet with additional vitamins and minerals can have health impacts, however the majority will not benefit.[7] People with dietary imbalances may include those on restrictive diets and those who cannot or will not eat a nutritious diet. Pregnant women and elderly adults have different nutritional needs than other adults, and a multivitamin may be indicated by a physician. Generally, medical advice is to avoid multivitamins, particularly those containing vitamin A,[8] during pregnancy unless they are recommended by a health care professional.[9] However, the NHS recommends 10μg of Vitamin D per day throughout the pregnancy and whilst breast feeding, as well as 400μg of folic acid during the first trimester (first 12 weeks of pregnancy).[8] Some individuals may need to take iron, vitamin C, or calcium supplements during pregnancy, but only on the advice of a doctor.

In the 1999–2000 National Health and Nutrition Examination Survey, 52% of adults in the United States reported taking at least one dietary supplement in the last month and 35% reported regular use of multivitamin-multimineral supplements. Women versus men, older adults versus younger adults, non-Hispanic whites versus non-Hispanic blacks, and those with higher education levels versus lower education levels (among other categories) were more likely to take multivitamins. Individuals who use dietary supplements (including multivitamins) generally report higher dietary nutrient intakes and healthier diets. Additionally, adults with a history of prostate and breast cancers were more likely to use dietary and multivitamin supplements.[10]

The amounts of each vitamin type in multivitamin formulations are generally adapted to correlate with what is believed to result in optimal health effects in large population groups.

The health benefit of vitamins generally follows a biphasic dose-response curve, taking the shape of a bell curve, with the area in the middle being the safe-intake range and the edges representing deficiency and toxicity.[11] For example, the Food and Drug Administration recommends that adults on a 2,000 calorie diet get between 60 and 90 milligrams of vitamin C per day.[12] This is the middle of the bell curve. The upper limit is 2,000 milligrams per day for adults, which is considered potentially dangerous.[13]

However, these standard amounts may not correlate what is optimal in certain subpopulations, such as in children, pregnant women and people with certain medical conditions and medication.

In particular, pregnant women should generally consult their doctors before taking any multivitamins: for example, either an excess or deficiency of vitamin A can cause birth defects.[14] Long-term use of beta-carotene, vitamin A, and vitamin E supplements may shorten life,[media 1][15] with the additional risk being particularly large in smokers.[citation needed] Many common brand supplements in the United States contain levels above the DRI/RDA amounts for some vitamins or minerals.

Severe vitamin and mineral deficiencies require medical treatment and can be very difficult to treat with common over-the-counter multivitamins. In such situations, special vitamin or mineral forms with much higher potencies are available, either as individual components or as specialized formulations.

Multivitamins in large quantities may pose a risk of an acute overdose due to the toxicity of some components, principally iron. However, in contrast to iron tablets, which can be lethal to children,[16] toxicity from overdoses of multivitamins are very rare.[17] There appears to be little risk to supplement users of experiencing acute side effects due to excessive intakes of micronutrients.[18] There also are strict limits on the retinol content for vitamin A during pregnancies that are specifically addressed by prenatal formulas.

As noted in dietary guidelines from Harvard School of Public Health in 2008, multivitamins should not replace healthy eating, or make up for unhealthy eating.[19]

Epidemiological research on multivitamin use and disease

Provided that proper precautions are taken (such as adjusting the vitamin amounts to what is believed to be appropriate for children, pregnant women or people with certain medical conditions), multivitamin intake is generally safe, but research is still ongoing in regard to what health effects multivitamins have.

In February 2009, a study conducted in 161,808 postmenopausal women from the Women's Health Initiative clinical trials concluded that after 8 years of follow-up "multivitamin use has little or no influence on the risk of common cancers, cardiovascular disease, or total mortality".[24] Another 2010 study in the Journal of Clinical Oncology suggested that multivitamin use during chemotherapy for stage III colon cancer had no effect on the outcomes of treatment.[25] A very large prospective cohort study published in 2011, including more than 180,000 participants, found no significant association between multivitamin use and mortality from all causes. The study also found no impact of multivitamin use on the risk of cardiovascular disease or cancer.[26]

One major meta-analysis published in 2011, including previous cohort and case-control studies, concluded that multivitamin use was not significantly associated with the risk of breast cancer. It noted that 1 Swedish cohort study has indicated such an effect, but with all studies taken together, the association was not statistically significant.[23] A 2012 meta-analysis of 10 randomized, placebo-controlled trials published in the Journal of Alzheimer's Disease found that a daily multivitamin may improve immediate recall memory, but did not affect any other measure of cognitive function.[27]

A 2006 report by the U.S. Agency for Healthcare Research and Quality concluded that "regular supplementation with a single nutrient or a mixture of nutrients for years has no significant benefits in the primary prevention of cancer, cardiovascular disease, cataract, age-related macular degeneration or cognitive decline."[4] However, the report noted that multivitamins have beneficial effects for certain sub-populations, such as people with poor nutritional status, that vitamin D and calcium can help prevent fractures in older people, and that zinc and antioxidants can help prevent age-related macular degeneration in high-risk individuals.[4]

The U.S. Office of Dietary Supplements, a branch of the National Institutes of Health, suggests that multivitamin supplements might be helpful for some people with specific health problems (for example, macular degeneration). However, the Office concluded that "most research shows that healthy people who take an MVM [multivitamin] do not have a lower chance of getting any diseases, such as cancer, heart disease, or diabetes. Based on current research, it's not possible to recommend for or against the use of MVMs to stay healthier longer."[5]

The United Kingdom Food Standards Agency recommended in 2007 that pregnant women should take extra folic acid and iron and that older people might need extra vitamin D and iron.[28] However, these recommendations also advised that "Vitamin and mineral supplements are not a replacement for good eating habits."[28]

Because of their categorization as a dietary supplement by the Food and Drug Administration (FDA), most multivitamins sold in the U.S. are not required to undergo the testing procedures typical of pharmaceutical drugs.

However, some multivitamins contain very high doses of one or several vitamins or minerals, or are specifically intended to treat, cure, or prevent disease, and therefore require a prescription or medicinal license in the U.S. Since such drugs contain no new substances, they do not require the same testing as would be required by a New Drug Application, but were allowed on the market as drugs due to the Drug Efficacy Study Implementation program.[29]

Quick links: Medicine Portal | Encyclopedia‏‎‏‎ | Gray's Anatomy‏‎ | Topics‏‎ |‏‎ Diseases‏‎ | Drugs | Wellness | Obesity‏‎ | Metabolic syndrome | Weight loss*
Disclaimer: The entire contents of WIKIMD.ORG are for informational purposes only and do not render medical advice or professional services. If you have a medical emergency, you should CALL 911 immediately! Given the nature of the wiki, the information provided may not be accurate, misleading and or incorrect. Use the information on this wiki at your own risk! See full Disclaimer.
Link to this page: <a href="http://www.wikimd.org/wiki/Multivitamin">Multivitamin</a>