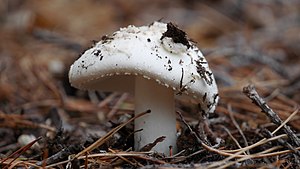 Fleshy body of any of numerous edible fungi;  a large cloud of rubble and dust shaped like a mushroom and rising into the sky after an explosion (especially of a nuclear bomb);  any of various fleshy fungi of the subdivision Basidiomycota consisting of a cap at the end of a stem arising from an underground mycelium;common name for an edible agaric (contrasting with the inedible toadstool);  verb grow and spread fast;  pick or gather mushrooms.

To many people, mushrooms are mysterious organisms that seem to appear sporadically without rhyme or reason and then disappear in a matter of days or hours. They come in a vast array of colors and bewildering shapes, and they have no obvious means of reproduction. Some are edible, some are poisonous. In times past, the term “mushroom” was used to denote edible stalked mushrooms having gills, particularly.

The cultivated white button mushrooms and portobello mushrooms that are sold in supermarkets are typical examples.

Similar species having an umbrella-like form and radiating plate-like “gills” beneath the cap were called toadstools and were considered to be inedible or poisonous. More recently those who study these fascinating organisms have adopted a broader definition of mushrooms. In addition to the familiar gilled mushrooms, these include coral mushrooms, polypores, boletes, spine fungi, bracket fungi (also known as tree conks), puffballs, morels and others. Together these larger fungi are referred to as macrofungi.

All forms of macrofungi have two things in common. They have fruiting bodies large enough to be seen without magnification, and their function is to produce and disseminate reproductive spores. Spores are to fungi what seeds are to green plants, but unlike plant seeds, fungus spores are microscopic and cannot be seen individually by the naked eye. Fungi also differ from plants in that they lack the green pigment chlorophyll that allows plants to manufacture their own food through the process of photosynthesis.

Fungi must obtain their food from pre-existing living or dead organic matter. When a mushroom spore germinates, it sends forth a thread-like filament called a hypha (plural hyphae), which in a suitable environment will then branch and expand into a network called mycelium. The mycelium is normally concealed within soil, leaf litter, wood or other substrate. The hyphae secrete digestive enzymes that break down organic matter and then absorb the released nutrients. Given a sufficient food resource, a mycelium may live for many years, and periodically when conditions of moisture and temperature are favorable, it will produce sporebearing fruiting bodies thus completing its life cycle. Some fungi have more complicated life histories but most of the macrofungi that we think of as mushrooms work in this way. Ecology of Mushrooms and Fungi Fungi that “feed” on dead organic matter are called saprotrophs. These are nature’s pre-eminent recyclers. They decompose plant and animal remains, and release their carbon for use by successive generations of organisms. These fungi are as essential to life on earth as air and water.

Fungi are the principal decomposers of cellulose and lignin, the basic components of wood. If not for saprotrophic fungi that continuously recycle the yearly accumulation of leaves, fruits, fallen branches and trees, our forests would soon become impenetrable. Decay fungi also soften the heartwood in trees, which enables woodpeckers and other cavity nesting birds to more easily excavate their nest sites. Once abandoned, these nest cavities are used as homes by other birds and animals. Living trees and downed logs that become hollow from the action of wood decay fungi provide many years of shelter for wildlife. In addition, the fruiting bodies of macrofungi are an important food item in the diet of numerous insects, mollusks (especially snails) and many mammals. Deer, squirrels, chipmunks and woodrats are particularly fond of various mushrooms. Some macrofungi are parasitic on living plants and animals.

Those that cause harm to their hosts are called pathogens. Few of the gilled mushrooms are serious pathogens but the common Honey Mushroom (see illustration) is one that kills trees. Most of the fleshier gilled mushrooms and boletes that grow on soil in forests have a relationship with trees that benefits both organisms. In this association, called mycorrhiza, the fungus mycelium attaches to the tree’s roots and permeates into the soil well beyond the normal reach of the root system. This greatly increases the tree’s ability to absorb moisture and essential nutrients such as nitrogen and phosphorus. In return, the tree provides the fungus with photosynthesized carbohydrates. Occasionally the relationship is quite specific where a given species of mushroom will only associate with a single species (Suillus grevil- of tree. For instance, the Larch Bolete will only grow in association with larch trees. lei) Most trees, however, have multiple fungus partners, and many mushrooms form mycorrhiza with several kinds of trees.

Mushrooms are among the many foods thought to play an important role in keeping the immune system healthy. Now, Agricultural Research Service (ARS)-funded scientists have conducted an animal-model and cell-culture study showing that white button mushrooms enhanced the activity of critical cells in the body's immune system. In the United States, white button mushrooms represent 90 percent of the total mushrooms consumed. Agaricus or White button are the most common and least expensive mushrooms to appear on grocery store shelves. They have a mild taste and can be used in just about anything from salads to sauces. Button mushroom flavor intensifies when cooked, making them ideal for sautéing and grilling.

One of the most commonly harvested mushrooms in the Pacific Northwest, chanterelles are funnel- or trumpet-shaped mushrooms with a fruity, apricot-like aroma and mild, peppery taste. Most are yellow or orange. Chanterelles pair well with herbs like chives and tarragon, are delicious sautéed or roasted and are a good substitute for pricier morel mushrooms.

Crimini look similar to the white button, but are a little darker in color and have an earthier, stronger taste. They’re actually a young portabella and are sometimes called “baby bellas.” Criminis are good eaten raw, roasted or sautéed. Pair with garlic, thyme or balsamic vinegar for the best flavor.

Enoki mushrooms are often used in Asian cuisine (particularly soups). They are long stemmed, white and have a delicate flavor and a slight crunch. Trim off the root end of the cluster and separate the mushrooms before serving. Enokis add crunch to salads and sandwiches, and mild flavor to soups and stir-fries.

Its honeycomb-like shape and intense, deep woods flavor add to the morel mystique. Varying in color from light yellow to dark brown, fresh morels are available (and hunted) in spring and summer. Accessible year-round, dried morels are full of flavor and much less expensive than the fresh variety. Cook before eating by sautéing, stuffing or simmering morels to create flavorful sauces.

Oyster mushrooms are smooth, trumpet-shaped and have a light flavor. Though the color fades when cooked, oyster mushrooms can be yellow, pink or blue. Oyster mushrooms pair well with fish, seafood, poultry and red meat and are delicious simply sautéed or roasted whole.

Porcini mushrooms are reddish brown in appearance. Porcinis are some of the most sought-after wild mushrooms for their distinct earthy, nutty flavor. Less expensive dried porcini can be reconstituted and used to add robust flavor to sauces, soups, stews and stuffing. Try them in a classic Italian risotto.

A grown-up crimini, portabellas are large, firm and have a meaty taste and texture. With its steak-like texture, grilled portabellas make a satisfying vegan “burger.” Sauté, broil or roast portabellas and enjoy in fajitas, as a pizza topping or chopped into a hearty ragout. To prevent discoloration, remove the black gills before sautéing.

Shiitake mushrooms were originally cultivated in China and Japan. Like portabellas, shiitakes have a meaty texture. Cooking brings out their earthy, smoky flavor. With the tough stem removed, try shiitakes sautéed or add to stir-fries, soups or pasta dishes. For more intense flavor, try dried shiitakes in your recipes.

The morel, found throughout North America, is probably the best known of the edible mushrooms. Ranging in color from black to blonde, these tasty fungi can grow to be a foot tall. Most of the time, however,these “sponge” or “honeycomb”mushrooms are 3 to 5 inches tall. The best time for morel hunting is April and May. Morel hunting requires a slow pace, an eye for detail and a lot of patience. Although morels are often found in association with dead elms, tulip trees and beech-maple forests, morels have been known to suddenly appear in front yards, too.

Often found pushing its way up and out of lawns, this species is also considered edible. It must be cooked and eaten quickly after gathering. If too much time passes, the cap will liquefy into a black, inky mess. That is the reason it’s also called “inkycap fungi.” A word of caution—you should not consume alcohol within a day or two of eating inky cap fungi. The mushrooms deactivate an enzyme in the human body that would otherwisedetoxify the alcohol. Although this fungus is fragile, it has been seen pushing its way up through asphalt.

Fungus Look for this extremely common fungus on dead trees and decaying logs. As a type of “shelf” fungus, its various colored bands clearly reveal how it got its name.

The “eggs” are actually smallsacs that contain the spores.

When raindrops fall and hit the cup or “nest,” the eggs are splashed out and dispersed. These fungi can be found growing on decaying twigs, sawdust or straw. Look carefully—they only reach about a half-inch in diameter.

These are a small versionof giant puffballs.

The outer layer of earth stars splits into rays that arch back and lift the earthstar. This makes it easier for the wind to carry small puffs of spores to new habitats.

One of the most spectacular members of the fungi family, this mushroom can grow to weigh 10 pounds and measure more than 20 inches across. When the flesh is firmand white throughout, puffballs are edible. However, when the puffball matures, the flesh turns brown. A drop of rain, a raccoon’s searching paw or another disturbance to a “ripe” puff ball causes the release of countless spores.

Also called “chicken of the woods,” this fungus is unmistakable. Characterized by an extremely colorful orange top and bright yellow bottom,only the tender edges of the shelf are gathered for eating.

This fungus becomes indigestible as it ages and is known to cause an allergic reaction, which may include causing swollen lips in some people. It is most often seen growing on dead tree trunks, logs and stumps in late summer.

This is a famous fungus to some creative people. The white surface underneath bruises easily, changing to adark brown. A drawing can be etchedin this underside of the fungus and will, with drying and careful handling, remain visible for a longtime. One old woodsman sketched hislog cabin on a conk, and he claims thedrawing lasted more than 40 years.

Join us: This article is a stub. Help improve Mushroom or others. Do not trust amateurs with your life! Join us in this effort!. Paid editors welcome.

Help WikiMD:Join WikiMD as an an editor and help improve the page Mushroom or others.

Quick links: Medicine Portal | Encyclopedia‏‎‏‎ | Gray's Anatomy‏‎ | Topics‏‎ |‏‎ Diseases‏‎ | Drugs | Wellness | Obesity‏‎ | Metabolic syndrome | Weight loss*
Disclaimer: The entire contents of WIKIMD.ORG are for informational purposes only and do not render medical advice or professional services. If you have a medical emergency, you should CALL 911 immediately! Given the nature of the wiki, the information provided may not be accurate, misleading and or incorrect. Use the information on this wiki at your own risk! See full Disclaimer.
Link to this page: <a href="http://www.wikimd.org/wiki/Mushroom">Mushroom</a>