Mycosis fungoides is a disease in which T-cell lymphocytes (a type of white blood cell) become malignant (cancerous) and affect the skin. This condition is one of the most common types of T-cell lymphoma. Mycosis fungoides is characterized by a scaly, red rash that develops on the skin, particularly on areas that are not usually exposed to the sun. The rash may last for months or years without causing any symptoms. Over time, a thin, reddened, eczema-like rash may develop, followed by thickened, red patches of skin. Finally, tumors form which may develop into ulcers and become infected. Mycosis fungoides was so named because the tumors can resemble mushrooms, a type of fungus. Common locations for tumor development include the upper thighs and groin, breasts, armpits, and the crook of the elbow. Open sores may develop on the tumors, often leading to infection. 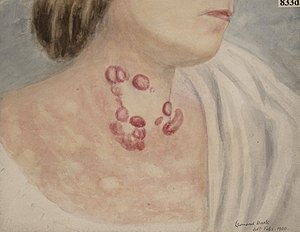 The cause of mycosis fungoides is unknown. Most affected individuals have one or more chromosomal abnormalities, such as the loss or gain of genetic material. These abnormalities occur during a person's lifetime and are found only in the DNA of cancerous cells. Abnormalities have been found on most chromosomes, but some regions are more commonly affected than others. People with this condition tend to have additions of DNA in regions of chromosomes 7 and 17 or loss of DNA from regions of chromosomes 9 and 10. It is unclear whether these genetic changes play a role in mycosis fungoides, although the tendency to acquire chromosome abnormalities (chromosomal instability) is a feature of many cancers. It can lead to genetic changes that allow cells to grow and divide uncontrollably. Other research suggests that certain variants of HLA class II genes are associated with mycosis fungoides. HLA genes help the immune system distinguish the body's own proteins from proteins made by foreign invaders (such as viruses and bacteria). Each HLA gene has many different normal variations, allowing each person's immune system to react to a wide range of foreign proteins. The specific variants are inherited through families. Certain variations of HLA genes may affect the risk of developing mycosis fungoides or may impact progression of the disorder.

The inheritance pattern of mycosis fungoides has not been determined. Although the condition has been found in multiple members of more than a dozen families, it most often occurs in people with no history of the disorder in their family and is typically not inherited.

Typical visible symptoms include rash-like patches, tumors, or lesions. Itching ([[pruritus[[) is common, perhaps in 20 percent of patients, but is not universal. The symptoms displayed are progressive, with early stages consisting of lesions presented as scaly patches. These lesions prefer the buttock region. The later stages involve the patches evolving into plaques distributed over the entire body. The advanced stage of mycosis fungoides is characterized by generalized erythroderma, with severe pruritus and scaling.

Mycosis fungoides may go through the following phases:

Premycotic phase: A scaly, red rash in areas of the body that usually are not exposed to the sun. This rash does not cause symptoms and may last for months or years. It is hard to diagnose the rash as mycosis fungoides during this phase. Patch phase: Thin, reddened, eczema-like rash. Plaque phase: Small raised bumps (papules) or hardened lesions on the skin, which may be reddened. Tumor phase: Tumors form on the skin. These tumors may develop ulcers and the skin may get infected.

The following tests and procedures may be used:

Physical exam and health history: An exam of the body to check general signs of health, including checking for signs of disease, such as lumps, the number and type of skin lesions, or anything else that seems unusual. Pictures of the skin and a history of the patient’s health habits and past illnesses and treatments will also be taken. Complete blood count with differential: A procedure in which a sample of blood is drawn and checked for the following:

ENLARGEComplete blood count (CBC); left panel shows blood being drawn from a vein on the inside of the elbow using a tube attached to a syringe; right panel shows a laboratory test tube with blood cells separated into layers: plasma, white blood cells, platelets, and red blood cells. Complete blood count (CBC). Blood is collected by inserting a needle into a vein and allowing the blood to flow into a tube. The blood sample is sent to the laboratory and the red blood cells, white blood cells, and platelets are counted. The CBC is used to test for, diagnose, and monitor many different conditions. Sézary blood cell count: A procedure in which a sample of blood is viewed under a microscope to count the number of Sézary cells. HIV test: A test to measure the level of HIV antibodies in a sample of blood. Antibodies are made by the body when it is invaded by a foreign substance. A high level of HIV antibodies may mean the body has been infected with HIV. Skin biopsy: The removal of cells or tissues so they can be viewed under a microscope to check for signs of cancer. The doctor may remove a growth from the skin, which will be examined by a pathologist. More than one skin biopsy may be needed to diagnose mycosis fungoides. Other tests that may be done on the cells or tissue sample include the following: Immunophenotyping: A laboratory test that uses antibodies to identify cancer cells based on the types of antigens or markers on the surface of the cells. This test is used to help diagnose specific types of lymphoma. Flow cytometry: A laboratory test that measures the number of cells in a sample, the percentage of live cells in a sample, and certain characteristics of the cells, such as size, shape, and the presence of tumor (or other) markers on the cell surface. The cells from a sample of a patient’s blood, bone marrow, or other tissue are stained with a fluorescent dye, placed in a fluid, and then passed one at a time through a beam of light. The test results are based on how the cells that were stained with the fluorescent dye react to the beam of light. This test is used to help diagnose and manage certain types of cancers, such as leukemia and lymphoma. T-cell receptor (TCR) gene rearrangement test: A laboratory test in which cells in a sample of blood or bone marrow are checked to see if there are certain changes in the genes that make receptors on T cells (white blood cells). Testing for these gene changes can tell whether large numbers of T cells with a certain T-cell receptor are being made.

There are different types of treatment for patients with mycosis fungoides and Sézary syndrome cancer. Seven types of standard treatment are used:

Retinoids, such as bexarotene, are drugs related to vitamin A that can slow the growth of certain types of cancer cells. The retinoids may be taken by mouth or put on the skin.

Lenalidomide is a drug that helps the immune system kill abnormal blood cells or cancer cells and may prevent the growth of new blood vessels that tumors need to grow.

Vorinostat and romidepsin are two of the histone deacetylase (HDAC) inhibitors used to treat mycosis fungoides. The medication(s) listed below have been approved by the Food and Drug Administration (FDA) as orphan products for treatment of this condition.

Mycosis fungoides is a rare disease.

Join WikiMD as a freelancer or paid editor and help improve the page Mycosis fungoides or others.
Retrieved from "http://www.wikimd.org/wiki/index.php?title=Mycosis_fungoides&oldid=2069483"
Categories: