From WikiMD
Jump to navigation Jump to search
Share
For other uses, see Nap (disambiguation). 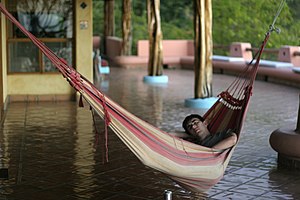 Hammock napping on a patio, in Costa Rica

A nap is a short period of sleep, typically taken during daylight hours as an adjunct to the usual nocturnal sleep period. Naps are most often taken as a response to drowsiness during waking hours. Cultural attitudes toward napping during the work day vary. In many western cultures children and the elderly are expected to nap during the day and are provided with designated periods and locations to do so. In these same cultures, most working adults are not expected to sleep during the day and napping on the job is widely considered unacceptable. Other cultures (especially those in hot climates) serve their largest meals at midday, with allowance for a nap period (siesta) afterwards before returning to work.

Napping was found to be both physiologically and psychologically beneficial. Napping for 20 minutes can help refresh the mind, improve overall alertness, boost mood and increase productivity.[1] Napping may benefit the heart. In a six-year study of Greek adults, researchers found that men who took naps at least three times a week had a 37 percent lower risk of heart-related death.[2]

Scientists have been investigating the benefits of napping for years: the 20-minute nap, as well as sleep durations of 1–2 hours. Performance across a wide range of cognitive processes has been tested.[3] Studies demonstrate that naps are as good as a night of sleep for some types of memory tasks. A NASA study led by David F. Dinges, professor at the University of Pennsylvania School of Medicine, found that naps can improve certain memory functions and that long naps are more effective than short ones.[4] In that NASA study, volunteers spent several days living on one of 18 different sleep schedules, all in a laboratory setting. To measure the effectiveness of the naps, tests probing memory, alertness, response time, and other cognitive skills were used.

The National Institute of Mental Health funded a team of doctors, led by Alan Hobson, Robert Stickgold, and colleagues at Harvard University for a study which showed that a midday nap reverses information overload. Reporting in Nature Neuroscience, Sara Mednick, Stickgold and colleagues also demonstrated that, in some cases, a 1-hour nap could even boost performance to an individual's top levels. The NIMH team wrote: "The bottom line is: we should stop feeling guilty about taking that 'power nap' at work."[5]

The siesta habit has recently been associated with a 37% reduction in coronary mortality, possibly due to reduced cardiovascular stress mediated by daytime sleep (Naska et al., 2007). Nevertheless, epidemiological studies on the relations between cardiovascular health and siesta have led to conflicting conclusions, possibly because of poor control of moderator variables, such as physical activity. It is possible that people who take a siesta have different physical activity habits, e.g. waking earlier and scheduling more activity during the morning. Such differences in physical activity may mediate different 24-hour profiles in cardiovascular function. Even if such effects of physical activity can be discounted for explaining the relationship between siesta and cardiovascular health, it is still unknown whether it is the daytime nap itself, a supine posture or the expectancy of a nap that is the most important factor. It was recently suggested that a short nap can reduce stress and blood pressure (BP), with the main changes in BP occurring between the time of lights off and the onset of stage 1 (Zaregarizi, M. 2007 & 2012).

Zaregarizi and his team have conducted that the acute time of falling asleep was where beneficial cardiovascular changes take place. This study has indicated that a large decline in blood pressure occurs during the daytime sleep-onset period only when sleep is expected however when subjects rest in a supine position, the same reduction in blood pressure is not observed. This blood pressure reduction may be associated with the lower coronary mortality rates seen in Mediterranean and Latin American populations where siestas are common. Zaregarizi assessed cardiovascular function (blood pressure, heart rate, and measurements of blood vessel dilation) while nine healthy volunteers, 34 years of age on average, spent an hour standing quietly; reclining at rest but not sleeping; or reclining to nap. All participants were restricted to 4 hours of sleep on the night prior to each of the sleep laboratory tests. During three daytime naps, he noted significant reductions in blood pressure and heart rate. By contrast, the team did not observe changes in cardiovascular function while the participants were standing or reclining at rest.

These findings also show that the greatest decline in blood pressure occurs between lights-off and onset of daytime sleep itself. During this sleep period, which lasted 9.7 minutes on average, blood pressure decreased, while blood vessel dilation increased by more than 9 percent.

“There is little change in blood pressure once a subject is actually asleep," Zaregarizi noted, and he found minor changes in blood vessel dilation during sleep (Zaregarizi, M. 2007 & 2012).

Naps (even multiple per day) are not typically long or deep enough to provide the same restorative benefits as a continuous 6–8 hour period of sleep, and can result in the accumulation of a sleep deficit if naps are regularly used as a substitute.[citation needed] Naps are also not recommended for those suffering from insomnia or depression, as they may aggravate already disrupted rest/wake patterns.[6]

A power nap, also known as a Stage 2 nap, is a short slumber of 20 minutes or less which terminates before the occurrence of deep slow-wave sleep (SWS), intended to quickly revitalize the napper. The expression "power nap" was coined by Cornell University social psychologist James Maas.[7]

The 20-minute nap increases alertness and motor skills.[7] Various durations may be recommended for power naps, which are very short compared to regular sleep. The short duration prevents nappers from sleeping so long that they enter the slow wave portion of the normal sleep cycle without being able to complete the cycle. Entering deep, slow-wave sleep and failing to complete the normal sleep cycle, can result in a phenomenon known as sleep inertia, where one feels groggy, disoriented, and even more sleepy than before beginning the nap. In order to attain optimal post-nap performance, a Stage 2 nap must be limited to the beginning of a sleep cycle, specifically sleep stages N1 and N2, typically 18–25 minutes.

People who regularly take these short naps, or catnaps as they used to be called, may develop a good idea of the duration which works best for them, as well as which tools, environment, position, and associated factors help produce the best results. Power naps are effective even when schedules allow a full night's sleep. Mitsuo Hayashi and Tadao Hori[8] have demonstrated that a nap improves mental performance, even after a full night's sleep.

A caffeine nap is a short nap that is preceded by the intake of caffeine. In a driving simulator and a series of studies, Horne and Reyner investigated the effects of cold air, radio, a break with no nap, a nap, caffeine pill vs. placebo and a short nap preceded by caffeine on mildly sleep-deprived subjects. The caffeine nap was by far the most effective in reducing driving "incidents" and subjective sleepiness. Caffeine in coffee takes up to a half-hour to have an alerting effect, hence "a short (<15min) nap will not be compromised if it is taken immediately after the coffee."[9][10][11][12]

Systematic napping as a lifestyle

A contemporary fad called polyphasic sleeping entails avoiding long sleeps, instead taking regularly spaced short naps. Sara Mednick, whose sleep research investigates the effects of napping, included a chapter, "Extreme Napping", in her book Take a Nap!.[7] In response to questions from readers about the "uberman" schedule of "polyphasic sleeping", she commented as follows:

This practice rests upon one important hypothesis that our biological rhythms are adaptable. This means that we can train our internal mechanisms not only when to sleep and wake, but also when to get hungry, have energy for exercise, perform mental activities. Inferred in this hypothesis is that we have the power to regulate our mood, metabolism, core body temperature, endocrine and stress response, basically everything inside this container of flesh we call home. Truly an Uberman feat![13]

Polyphasic sleep is claimed to be of particular benefit in cases where very long periods of wakefulness (+24 hours) are necessary and a normal circadian rhythm is impossible (such as certain cases of military duty or emergency service). Critics of polyphasic sleep dispute the notion that the human brain can simply be classically conditioned to tolerate a state of near constant wakefulness without deleterious effects. Studies by the US military showed the success rate of introducing polyphasic sleep varied widely depending on individual physiology/psychology, the amount of time provided to acclimate to the new schedule, and the type and difficulty of the tasks being performed. Attempting to acclimate to a polyphasic schedule often induced significant stresses in the participants, with a corresponding deficits in alertness and skill that became progressive and did not improve until the restoration of normal sleep. Many of the more radical cycles (such as the "Uberman Schedule", allowing only 15 minute naps every 4 hours) are so demanding that to date their only successes have been anecdotal reports from serious devotees and are widely considered to be harmful and physically unsustainable for the average person.[citation needed]

Quick links: Medicine Portal | Encyclopedia‏‎‏‎ | Gray's Anatomy‏‎ | Topics‏‎ |‏‎ Diseases‏‎ | Drugs | Wellness | Obesity‏‎ | Metabolic syndrome | Weight loss*
Disclaimer: The entire contents of WIKIMD.ORG are for informational purposes only and do not render medical advice or professional services. If you have a medical emergency, you should CALL 911 immediately! Given the nature of the wiki, the information provided may not be accurate, misleading and or incorrect. Use the information on this wiki at your own risk! See full Disclaimer.
Link to this page: <a href="http://www.wikimd.org/wiki/Nap">Nap</a>