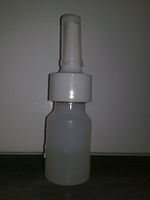 Nasal sprays come in a variety of forms. Medicated such as Astelin, Afrin and Nasonex and natural such as Sinusoothe and Sterimar. Although delivery methods vary, most nasal sprays function by instilling a fine mist into the nostril by action of a hand-operated pump mechanism.

Excessive histamine function is the primary cause of allergic reactions in people. Histamine is a chemical naturally produced by the body which creates an inflammatory effect to help the immune system remove foreign substances. Antihistamines work by competing for receptor sites to block the function of histamine, thereby reducing the inflammatory effect. These products have gained popularity with sufferers of allergic rhinitis.

Astelin (azelastin hydrocholoride) and Patanase (olopatadine hydrochloride) are the only antihistamines available as a nasal spray in the United States and are available by prescription only.

Prolonged use of these types of sprays can damage the delicate mucous membranes in the nose. This causes increased inflammation, an effect known as rhinitis medicamentosa, or the "rebound effect". As a result, decongestant nasal sprays are advised for short-term use only, preferably 5 to 7 days at maximum however, some advise you to only use them 3 days at the max. However a recent clinical trial has shown that Flonase (fluticasone), a corticosteroid nasal spray, may be useful in reversing this condition.[1]

Corticosteroid nasal sprays such as Nasonex (mometasone furoate) and Rhinocort (budesonide) can be used to relieve the symptoms of sinusitis, hay fever, allergic rhinitis and non-allergic (perennial) rhinitis. They can reduce inflammation and histamine production in the nasal passages thereby relieving nasal congestion, runny nose, sneezing, sinus pain, headaches etc. They have been clinically proven[2] however they can cause side effects such as headaches, nausea and nose bleeds.

Saline sprays are also common and are typically unmedicated. A mist of saline solution is delivered to help moisturize dry or irritated nostrils. This is a form of nasal irrigation. They can also relieve nasal congestion and remove airborne irritants such as pollen, dust etc. thereby providing sinus allergy relief. The solution can be either isotonic or hypertonic. Isotonic solutions have the same salt concentration as the human body whereas hypertonic solutions have a higher salt content. Hypertonic solutions may be more useful at drawing moisture from the mucus membrane and relieving nasal congestion.

Some patients with rhinitis find nasal sprays including plant-derived chemical complexes such as ginger, capsaicin and tea-tree oil useful. There is however, no trial-verified evidence that they have a measurable effect on symptoms.

Frequently, a doctor or allergist will prescribe several types of nasal sprays in combination with each other or with other drugs. For example, a decongestant spray is often advised for the first few days of treatment in conjunction with an antihistamine or steroidal spray. The quick-acting effects of the decongestant allow for better initial delivery of the other sprays.

Quick links: Medicine Portal | Encyclopedia‏‎‏‎ | Gray's Anatomy‏‎ | Topics‏‎ |‏‎ Diseases‏‎ | Drugs | Wellness | Obesity‏‎ | Metabolic syndrome | Weight loss*
Disclaimer: The entire contents of WIKIMD.ORG are for informational purposes only and do not render medical advice or professional services. If you have a medical emergency, you should CALL 911 immediately! Given the nature of the wiki, the information provided may not be accurate, misleading and or incorrect. Use the information on this wiki at your own risk! See full Disclaimer.
Link to this page: <a href="http://www.wikimd.org/wiki/Nasal_spray">Nasal spray</a>