A nerve contains bundles of nerve fibers, either axons or dendrites, surrounded by connective tissue.

Twelve pairs of cranial nerves emerge from the inferior surface of the brain. All of these nerves, except the [glossary term:] vagus nerve, pass through foramina of the skull to innervate structures in the head, neck, and facial region.

The cranial nerves are designated both by name and by Roman numerals, according to the order in which they appear on the inferior surface of the brain. Most of the nerves have both sensory and motor components. Three of the nerves are associated with the special senses of smell, vision, hearing, and equilibrium and have only sensory fibers. Five other nerves are primarily motor in function but do have some sensory fibers for proprioception. The remaining four nerves consist of significant amounts of both sensory and motor fibers.

Acoustic neuromas are benign fibrous growths that arise from the balance nerve, also called the eighth cranial nerve or vestibulocochlear nerve. These tumors are non-malignant, meaning that they do not spread or metastasize to other parts of the body. The location of these tumors is deep inside the skull, adjacent to vital brain centers in the brain stem. As the tumors enlarge, they involve surrounding structures which have to do with vital functions. In the majority of cases, these tumors grow slowly over a period of years. In other cases, the growth rate is more rapid and patients develop symptoms at a faster pace. Usually, the symptoms are mild and many patients are not diagnosed until some time after their tumor has developed. Many patients also exhibit no tumor growth over a number of years when followed by yearly MRI scans.

Thirty-one pairs of spinal nerves emerge laterally from the spinal cord. Each pair of nerves corresponds to a segment of the cord and they are named accordingly. This means there are 8 cervical nerves, 12 thoracic nerves, 5 lumbar nerves, 5 sacral nerves, and 1 coccygeal nerve. 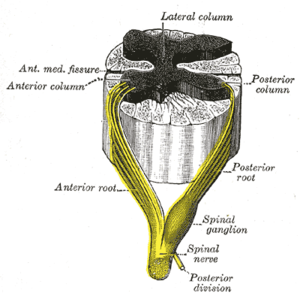 The autonomic nervous system is a visceral efferent system, which means it sends motor impulses to the visceral organs. It functions automatically and continuously, without conscious effort, to innervate smooth muscle, cardiac muscle, and glands. It is concerned with heart rate, breathing rate, blood pressure, body temperature, and other visceral activities that work together to maintain homeostasis.

The autonomic nervous system has two parts, the sympathetic division and the parasympathetic division. Many visceral organs are supplied with fibers from both divisions. In this case, one stimulates and the other inhibits. This antagonistic functional relationship serves as a balance to help maintain homeostasis.

^Nerve (article) is provided for informational purposes only. No expressed or implied warranties as to the validity of content.
WikiMD is not a substitute for professional advice. By accessing and using WikiMD you agree to the terms of use.
Templates etc. when imported from Wikipedia, are licensed under CC BY-SA 3.0. See full disclaimers.
Retrieved from "http://www.wikimd.org/wiki/index.php?title=Nerve&oldid=2369180"
Categories: