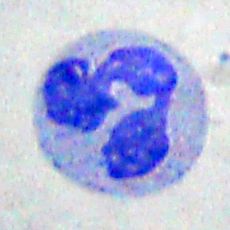 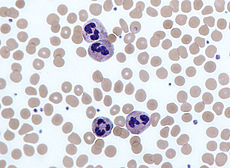 Neutrophils among the red blood corpuscles

Neutrophils are the most common type of white blood cell, often called neutrophil granulocytes. They destroy bacteria (and other parasites like fungi) during an infection. They get to the site of an injury within minutes. They have tiny granules full of enzymes and peptides which chop up the bacteria after they have taken them in.

The process of taking in bacteria is called phagocytosis. The bacteria end up in a vacuole inside the neutrophil. The enzymes then get to work on destroying the bacteria. Neutrophils are an important part of the body's immune system. They are a kind of granulocyte, and have a short life-span of a couple of days.

Quick links: Medicine Portal | Encyclopedia‏‎‏‎ | Gray's Anatomy‏‎ | Topics‏‎ |‏‎ Diseases‏‎ | Drugs | Wellness | Obesity‏‎ | Metabolic syndrome | Weight loss*
Disclaimer: The entire contents of WIKIMD.ORG are for informational purposes only and do not render medical advice or professional services. If you have a medical emergency, you should CALL 911 immediately! Given the nature of the wiki, the information provided may not be accurate, misleading and or incorrect. Use the information on this wiki at your own risk! See full Disclaimer.
Link to this page: <a href="http://www.wikimd.org/wiki/Neutrophil">Neutrophil</a>