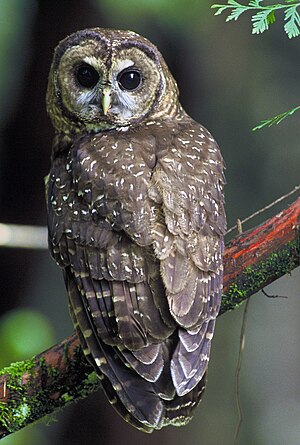 Owls are well known for being nocturnal, although some owls are active during the day.

Nocturnality is an animal behavior characterized by activity during the night and sleeping during the day. The common adjective is "nocturnal".

Nocturnal creatures generally have highly developed senses of hearing and smell, and specially adapted eyesight. Such traits can help animals like the Helicoverpa zea moths avoid predators.[1] Some animals, such as cats and ferrets, have eyes that can adapt to both low-level and bright day levels of illumination (see metaturnal). Others, such as bushbabies and (some) bats, can function only at night. Many nocturnal creatures including tarsiers and some owls have large eyes in comparison to their body size in order to compensate for the lower light levels during the night.

While most humans are diurnal, for various personal and social/cultural reasons some people are temporarily or habitually nocturnal.

Being active at night is a form of niche differentiation, where a species' niche is partitioned not by the amount of resources but by the amount of time (i.e. temporal division of the ecological niche). Hawks and owls can hunt the same field or meadow for the same rodents without conflict because hawks are diurnal and owls are nocturnal. This means they are not in competition for each other's prey.

Nocturnality is a form of crypsis, an adaptation to avoid or enhance predation. One of the reasons that (cathemeral) lions prefer to hunt at night is that many of their prey species (zebra, antelope, impala, wildebeest, etc.) have poor night vision. Many species of small rodents are active at night because most of the dozen or so birds of prey that hunt them are diurnal. There are many diurnal species that exhibit some nocturnal behaviors. For example, many seabirds and sea turtles only gather at breeding sites or colonies at night to reduce the risk of predation to themselves and/or their offspring.

Another reason for nocturnality is avoiding the heat of the day. This is especially true in arid biomes like deserts, where nocturnal behavior prevents creatures from losing precious water during the hot, dry daytime. This is an adaptation that enhances osmoregulation.[2] One of the reasons that (cathemeral) lions prefer to hunt at night is to conserve water.

Many plant species native to arid biomes have adapted so that their flowers only open at night when the sun's intense heat cannot wither and destroy their moist, delicate blossoms. These flowers are pollinated by bats, another creature of the night.

In zoos, nocturnal animals are usually kept in special night-illumination enclosures to invert their normal sleep-wake cycle and to keep them active during the hours when visitors will be there to see them. 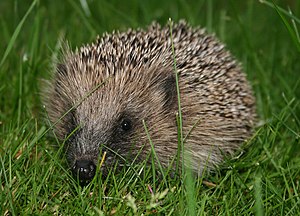 Hedgehogs and sugar gliders are just two of the many nocturnal species kept as (exotic) pets. Cats have adapted to domestication so that each individual, whether stray alley cat or pampered housecat, can change their activity level at will, becoming nocturnal or diurnal in response to their environment or the routine of their owners. Cats normally demonstrate crepuscular behavior, being most active in hunting and exploration at dusk and dawn.[3]

Quick links: Medicine Portal | Encyclopedia‏‎‏‎ | Gray's Anatomy‏‎ | Topics‏‎ |‏‎ Diseases‏‎ | Drugs | Wellness | Obesity‏‎ | Metabolic syndrome | Weight loss*
Disclaimer: The entire contents of WIKIMD.ORG are for informational purposes only and do not render medical advice or professional services. If you have a medical emergency, you should CALL 911 immediately! Given the nature of the wiki, the information provided may not be accurate, misleading and or incorrect. Use the information on this wiki at your own risk! See full Disclaimer.
Link to this page: <a href="http://www.wikimd.org/wiki/Nocturnality">Nocturnality</a>