A patch clamp recording reveals transitions between two conductance states of a single ion channel: closed (at top) and open (at bottom).

The patch clamp technique is a refinement of the voltage clamp. Erwin Neher and Bert Sakmann developed the patch clamp in the late 1970s and early 1980s. This discovery made it possible to record the currents of single ion channels for the first time, proving their involvement in fundamental cell processes such as action potential conduction. Neher and Sakmann received the Nobel Prize in Physiology or Medicine in 1991 for this work. 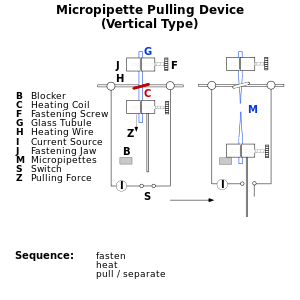 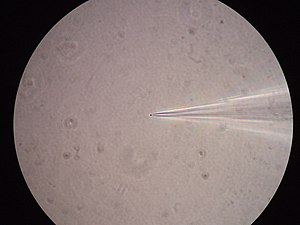 A bacterial spheroplast patched with a glass pipette

Patch clamp recording uses, as an electrode, a glass micropipette that has an open tip diameter of about one micrometer, a size enclosing a membrane surface area or "patch" that often contains just one or a few ion channel molecules. This type of electrode is distinct from the "sharp microelectrode" used to impale cells in traditional intracellular recordings, in that it is sealed onto the surface of the cell membrane, rather than inserted through it. In some experiments, the micropipette tip is heated in a microforge to produce a smooth surface that assists in forming a high resistance seal with the cell membrane. The interior of the pipette is filled with a solution matching the ionic composition of the bath solution, as in the case of cell-attached recording, or the cytoplasm for whole-cell recording. A chlorided silver wire is placed in contact with this solution and conducts electric current to the amplifier. The investigator can change the composition of this solution or add drugs to study the ion channels under different conditions. The micropipette is pressed against a cell membrane and suction is applied to assist in the formation of a high resistance seal between the glass and the cell membrane (a "gigaohm seal" or "gigaseal," since the electrical resistance of that seal is in excess of a gigaohm). The high resistance of this seal makes it possible to electronically isolate the currents measured across the membrane patch with little competing noise, as well as providing some mechanical stability to the recording.

Unlike traditional two-electrode voltage clamp recordings, patch clamp recording uses a single electrode to record currents. Many patch clamp amplifiers do not use true voltage clamp circuitry but instead are differential amplifiers that use the bath electrode to set the zero current level. This allows a researcher to keep the voltage constant while observing changes in current. Alternatively, the cell can be current clamped in whole-cell mode, keeping current constant while observing changes in membrane voltage.

The cell-attached patch clamp uses a micropipette attached to the cell membrane to allow recording from a single ion channel.

Several variations of the basic technique can be applied, depending on what the researcher wants to study. The inside-out and outside-out techniques are called "excised patch" techniques, because the patch is excised (removed) from the main body of the cell. Cell-attached and both excised patch techniques are used to study the behavior of individual ion channels in the section of membrane attached to the electrode.

Whole-cell patch and perforated patch allow the researcher to study the electrical behavior of the entire cell, instead of single channel currents. The whole-cell patch, which allows for low resistance electrical access to the inside of a cell, has now largely replaced high resistance microelectrode recording techniques to record currents across the entire cell membrane.

The electrode is sealed to the patch of membrane, and the cell remains intact. This allows for the recording of currents through single ion channels in that patch of membrane, without disrupting the interior of the cell. For ligand-gated ion channels or channels that are modulated by metabotropic receptors, the neurotransmitter or drug being studied is usually included in the pipette solution, where it can contact what had been the external surface of the membrane. While the resulting channel activity can be attributed to the drug being used, it is usually not possible to then change the drug concentration. The technique is thus limited to one point in a dose response curve per patch. Usually, the dose response is accomplished using several cells and patches. However, voltage-gated ion channels can be clamped at different membrane potentials using the same patch. This results in graded channel activation, and a complete I-V (current-voltage) curve can be established with only one patch.

After the gigaseal is formed, the micropipette is quickly withdrawn from the cell, thus ripping the patch of membrane off the cell, leaving the patch of membrane attached to the micropipette, and exposing the intracellular surface of the membrane to the external media. This is useful when an experimenter wishes to manipulate the environment at the intracellular surface of ion channels. For example, channels that are activated by intracellular ligands can then be studied through a range of ligand concentrations.

Whole cell recording of a nerve cell from the hippocampus. The pipette in the photograph has been marked with a slight blue colour.

Whole-cell recordings, in contrast, involve recording currents through multiple channels at once, over the membrane of the entire cell. The electrode is left in place on the cell, but more suction is applied to rupture the membrane patch, thus providing access to the intracellular space of the cell. The advantage of whole-cell patch clamp recording over sharp microelectrode recording is that the larger opening at the tip of the patch clamp electrode provides lower resistance and thus better electrical access to the inside of the cell. A disadvantage of this technique is that the volume of the electrode is larger than the cell, so the soluble contents of the cell's interior will slowly be replaced by the contents of the electrode. This is referred to as the electrode "dialyzing" the cell's contents. Thus, any properties of the cell that depend on soluble intracellular contents will be altered. The pipette solution used usually approximates the high-potassium environment of the interior of the cell. Generally speaking, there is a period at the beginning of a whole-cell recording, lasting approximately 10 minutes, when one can take measurements before the cell has been dialyzed.

After the whole-cell patch is formed, the electrode can be slowly withdrawn from the cell, allowing a bulb of membrane to bleb out from the cell. When the electrode is pulled far enough away, this bleb will detach from the cell and reform as a convex membrane on the end of the electrode (like a ball open at the electrode tip), with the original outside of the membrane facing outward from the electrode. Single channel recordings are possible in this conformation if the bleb of membrane is small enough. Outside-out patching gives the experimenter the opportunity to examine the properties of an ion channel when it is isolated from the cell, and exposed to different solutions on the extracellular surface of the membrane. The experimenter can perfuse the same patch with different solutions, and if the channel is activated from the extracellular face, a dose-response curve can then be obtained. This is the distinct advantage of the outside-out patch relative to the cell-attached method. However, it is more difficult to accomplish, as more steps are involved in the patching process.

In this variation of whole-cell recording, the experimenter forms the gigaohm seal, but does not use suction to rupture the patch membrane. Instead, the electrode solution contains small amounts of an antifungal or antibiotic agent, such as amphothericin-B, nystatin, or gramicidin. As the antibiotic molecules diffuse into the membrane patch, they form small perforations in the membrane, providing electrical access to the cell interior. This has the advantage of reducing the dialysis of the cell that occurs in whole-cell recordings, but also has several disadvantages. First, the access resistance is higher, relative to whole-cell, due to the partial membrane occupying the tip of the electrode (access resistance being the sum of the electrode resistance and the resistance at the electrode-cell junction). This will decrease electrical access and thus decrease current resolution, increase recording noise, and magnify any series resistance error. Second, it can take a significant amount of time for the antibiotic to perforate the membrane (10–30 minutes, though this can be reduced with properly shaped electrodes). Third, the membrane under the electrode tip is weakened by the perforations formed by the antibiotic and can rupture. If the patch ruptures, the recording is then in whole-cell mode, with antibiotic contaminating the inside of the cell.

Loose patch clamp is different in that it employs a loose seal rather than the tight gigaseal used in the conventional technique. A significant advantage of the loose seal is that the pipette that is used can be repeatedly removed from the membrane after recording, and the membrane will remain intact. This allows for repeated measurements in a variety of locations on the same cell without destroying the integrity of the membrane. A major disadvantage is that the resistance between the pipette and the membrane is greatly reduced, allowing current to leak through the seal. This leakage can be corrected for, however, which offers the opportunity to compare and contrast recordings made from different areas on the cell of interest.

Automated patch clamp systems have recently been developed, in order to inexpensively collect large amounts of data in a shorter period of time. Such systems typically include a single-use microfluidic device, either an injection molded or a PDMS cast chip, to capture a cell or cells, and an integrated electrode.

2
The unnamed parameter 2= is no longer supported. Please see the documentation for {{columns-list}}.

Quick links: Medicine Portal | Encyclopedia‏‎‏‎ | Gray's Anatomy‏‎ | Topics‏‎ |‏‎ Diseases‏‎ | Drugs | Wellness | Obesity‏‎ | Metabolic syndrome | Weight loss*
Disclaimer: The entire contents of WIKIMD.ORG are for informational purposes only and do not render medical advice or professional services. If you have a medical emergency, you should CALL 911 immediately! Given the nature of the wiki, the information provided may not be accurate, misleading and or incorrect. Use the information on this wiki at your own risk! See full Disclaimer.
Link to this page: <a href="http://www.wikimd.org/wiki/Patch_clamp">Patch clamp</a>