Pneumonia resulting from infection with pneumocystis jirovecii, frequently seen in the immunologically compromised, such as persons with AIDS, or steroid-treated individuals, the elderly, or premature or debilitated babies during their first three months.

Pneumocystis pneumonia (PCP) is a serious infection caused by the fungus Pneumocystis jirovecii.

Patients may be only slightly febrile (or even afebrile), but are likely to be extremely weak, dyspneic, and cyanotic. This is a major cause of morbidity among patients with AIDS.

Most people who get PCP have a medical condition that weakens their immune system, like HIV/AIDS, or take medicines that lower the body’s ability to fight germs and sickness. In the United States, people with HIV/AIDS are less likely to get PCP today than before the availability of antiretroviral therapy (ART). However, PCP is still a substantial public health problem. 1-3 Much of the information we have about PCP and its treatment comes from caring for patients with HIV/AIDS.

The symptoms of PCP include:

PCP is extremely rare in healthy people, but the fungus that causes this disease can live in their lungs without causing symptoms. In fact, up to 20% of adults might carry this fungus at any given time, and the immune system removes the fungus after several months.

PCP spreads from person to person through the air. 14-16 Some healthy adults can carry the Pneumocystis fungus in their lungs without having symptoms, and it can spread to other people, including those with weakened immune systems. 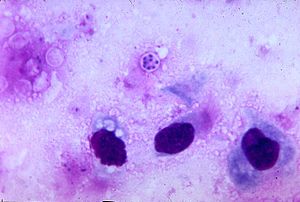 Many people are exposed to Pneumocystis as children, but they likely do not get sick because their immune systems prevent the fungus from causing an infection. In the past, scientists believed that people who had been exposed to Pneumocystis as children could later develop PCP from that childhood infection if their immune systems became weakened. However, it is more likely that people get PCP after being exposed to someone else who has PCP or who is carrying the fungus in their lungs without having symptoms.

PCP is diagnosed using a sample from a patient’s lungs. The sample is usually mucus that is either coughed up by the patient (called sputum) or collected by a procedure called bronchoalveolar lavage. Sometimes, a small sample of lung tissue (a biopsy) is used to diagnose PCP. The patient’s sample is sent to a laboratory, usually to be examined under a microscope. Polymerase chain reaction (PCR) can also be used to detect Pneumocystis DNA in different types of samples.

A blood test to detect β-D-glucan (a part of the cell wall of many different types of fungi) can also help diagnose PCP.

PCP must be treated with prescription medicine. Without treatment, PCP can cause death. The most common form of treatment is trimethoprim/sulfamethoxazole (TMP/SMX), which is also known as co-trimoxazole and by several different brand names, including Bactrim, Septra, and Cotrim. This medicine is given by mouth or through a vein for 3 weeks.

TMP/SMX can cause side effects such as rash and fever. Other medicines are available for patients who cannot take TMP/SMX.

Help WikiMD:Join WikiMD as an an editor and help improve the page Pneumocystis pneumonia or others.

Quick links: Medicine Portal | Encyclopedia‏‎‏‎ | Gray's Anatomy‏‎ | Topics‏‎ |‏‎ Diseases‏‎ | Drugs | Wellness | Obesity‏‎ | Metabolic syndrome | Weight loss*
Disclaimer: The entire contents of WIKIMD.ORG are for informational purposes only and do not render medical advice or professional services. If you have a medical emergency, you should CALL 911 immediately! Given the nature of the wiki, the information provided may not be accurate, misleading and or incorrect. Use the information on this wiki at your own risk! See full Disclaimer.
Link to this page: <a href="http://www.wikimd.org/wiki/Pneumocystis_pneumonia">Pneumocystis pneumonia</a>