Raynaud syndrome, also known as Raynaud's phenomenon, is a medical condition in which spasm of arteries cause episodes of reduced blood flow.[1] Typically, the fingers, and less commonly the toes, are involved.[1] Rarely, the nose, ears, or lips are affected.[1] The episodes result in the affected part turning white and then blue.[2] Often, numbness or pain occurs.[2] As blood flow returns, the area turns red and burns.[2] The episodes typically last minutes, but can last several hours.[2]

Episodes are often triggered by cold or emotional stress.[2] The two main types are primary Raynaud's, when the cause is unknown, and secondary Raynaud's, which occurs as a result of another condition.[3] Secondary Raynaud's can occur due to a connective-tissue disorder, such as scleroderma or lupus, injuries to the hands, prolonged vibration, smoking, thyroid problems, and certain medications, such as birth control pills.[4] Diagnosis is typically based on the symptoms.[3]

The primary treatment is avoiding the cold.[3] Other measures include the discontinuation of nicotine or stimulants use.[3] Medications for treatment of cases that do not improve include calcium channel blockers and iloprost.[3] Little evidence supports alternative medicine.[3] Severe disease may rarely be complicated by skin sores or gangrene.[2]

About 4% of people have the condition.[3] Onset of the primary form is typically between ages 15 and 30 and occurs more frequently in females.[3][5] The secondary form usually affects older people.[5] Both forms are more common in cold climates.[5] It is named after the French physician Maurice Raynaud, who described the condition in 1862.[3]

The condition can cause pain within the affected extremities, discoloration (paleness), and sensations of cold and/or numbness. This can often be distressing to those who are undiagnosed, and sometimes it can be obstructive. If someone with Raynaud's is placed into a cold climate, it could potentially become dangerous.

When exposed to cold temperatures, the blood supply to the fingers or toes, and in some cases the nose or earlobes, is markedly reduced; the skin turns pale or white (called pallor) and becomes cold and numb. These events are episodic, and when the episode subsides or the area is warmed, the blood flow returns, and the skin color first turns red (rubor), and then back to normal, often accompanied by swelling, tingling, and a painful "pins and needles" sensation.

All three color changes are observed in classic Raynaud's. However, not all patients see all of the aforementioned color changes in all episodes, especially in milder cases of the condition. Symptoms are thought to be due to reactive hyperemias of the areas deprived of blood flow.

Nipple blanching, or vasospasm of the nipple, can cause difficulty breastfeeding.

Smoking increases frequency and intensity of attacks, and a hormonal component exists. Caffeine, estrogen, and nonselective beta-blockers are often listed as aggravating factors, but evidence that they should be avoided is not solid.[8] People with the condition are more likely to have migraines and angina.[citation needed]

Raynaud's phenomenon, or secondary Raynaud's, occurs secondary to a wide variety of other conditions.

Secondary Raynaud's has a number of associations:

Raynaud's can herald these diseases by periods of more than 20 years in some cases, making it effectively the first presenting symptom. This may be the case in the CREST syndrome, of which Raynaud's is a part.

Patients with secondary Raynaud's can also have symptoms related to their underlying diseases. Raynaud's phenomenon is the initial symptom that presents for 70% of patients with scleroderma, a skin and joint disease.

When Raynaud's phenomenon is limited to one hand or one foot, it is referred to as unilateral Raynaud's. This is an uncommon form, and it is always secondary to local or regional vascular disease. It commonly progresses within several years to affect other limbs as the vascular disease progresses.[13] 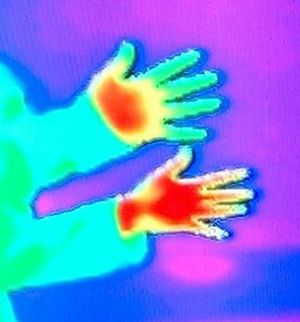 A careful medical history will often reveal whether the condition is primary or secondary. Once this has been established, an examination is largely to identify or exclude possible secondary causes.

Recently, International Consensus Criteria were developed for the diagnosis of primary Raynaud's phenomenon by a panel of experts in the fields of rheumatology and dermatology.[19]

Secondary Raynaud's is managed primarily by treating the underlying cause, and as primary Raynaud's, avoiding triggers, such as cold, emotional and environmental stress, vibrations and repetitive motions, and avoiding smoking (including passive smoking) and sympathomimetic drugs.[20]

Medications can be helpful for moderate or severe disease.

Evidence does not support the use of alternative medicine, including acupuncture and laser therapy.[3]

The prognosis of primary Raynaud syndrome is often very favorable, with no mortality and little morbidity. However, a minority develops gangrene. The prognosis of secondary Raynaud is dependent on the underlying disease, and how effective blood flow-restoring maneuvers are.[32]

Quick links: Medicine Portal | Encyclopedia‏‎‏‎ | Gray's Anatomy‏‎ | Topics‏‎ |‏‎ Diseases‏‎ | Drugs | Wellness | Obesity‏‎ | Metabolic syndrome | Weight loss*
Disclaimer: The entire contents of WIKIMD.ORG are for informational purposes only and do not render medical advice or professional services. If you have a medical emergency, you should CALL 911 immediately! Given the nature of the wiki, the information provided may not be accurate, misleading and or incorrect. Use the information on this wiki at your own risk! See full Disclaimer.
Link to this page: <a href="http://www.wikimd.org/wiki/Raynaud_syndrome">Raynaud syndrome</a>