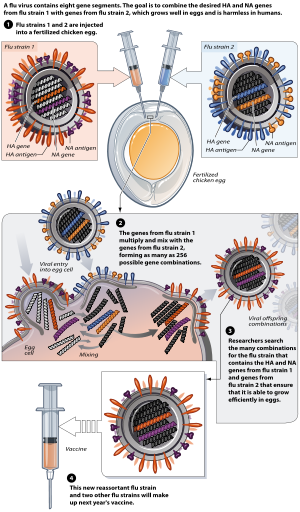 The process of reassortment in biotechnology

Reassortment is the mixing of the genetic material of a species into new combinations in different individuals. Several different processes contribute to reassortment, including assortment of chromosomes, and chromosomal crossover.[1] It is particularly used when two similar viruses that are infecting the same cell exchange genetic material. In particular, reassortment occurs among influenza viruses, whose genomes consist of eight distinct segments of RNA. These segments act like mini-chromosomes, and each time a flu virus is assembled, it requires one copy of each segment.

If a single host (a human, a chicken, or other animal) is infected by two different strains of the influenza virus, then it is possible that new assembled viral particles will be created from segments whose origin is mixed, some coming from one strain and some coming from another. The new reassortant strain will share properties of both of its parental lineages.

Reassortment is responsible for some of the major genetic shifts in the history of the influenza virus. The 1957 and 1968 pandemic flu strains were caused by reassortment between an avian virus and a human virus, whereas the H1N1 virus responsible for the 2009 swine flu outbreak has an unusual mix of swine, avian and human influenza genetic sequences.[2]

Quick links: Medicine Portal | Encyclopedia‏‎‏‎ | Gray's Anatomy‏‎ | Topics‏‎ |‏‎ Diseases‏‎ | Drugs | Wellness | Obesity‏‎ | Metabolic syndrome | Weight loss*
Disclaimer: The entire contents of WIKIMD.ORG are for informational purposes only and do not render medical advice or professional services. If you have a medical emergency, you should CALL 911 immediately! Given the nature of the wiki, the information provided may not be accurate, misleading and or incorrect. Use the information on this wiki at your own risk! See full Disclaimer.
Link to this page: <a href="http://www.wikimd.org/wiki/Reassortment">Reassortment</a>