RDS is more common in premature newborns because their lungs are not able to make enough surfactant. Surfactant is a foamy substance that keeps the lungs fully expanded so that newborns can breathe in air once they are born.

Without enough surfactant, the lungs collapse and the newborn has to work hard to breathe. He or she might not be able to breathe in enough oxygen to support the body's organs. Most babies who develop RDS show signs of breathing problems and a lack of oxygen at birth or within the first few hours that follow. The lack of oxygen can damage the baby's brain and other organs if not treated promptly.

RDS may change over time to become bronchopulmonary dysplasia, or BPD. This is another breathing disorder that may affect babies, especially premature babies.

RDS usually develops in the first 24 hours after birth. If premature newborns still have breathing problems by the time they reach 36 weeks gestation, they may be diagnosed with BPD. Some of the life-saving treatments used for RDS may contribute to BPD. Some newborns who have RDS recover and never get BPD. 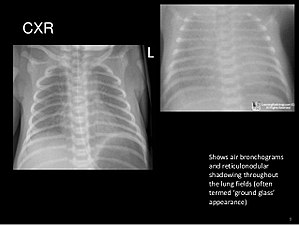 RDS is a type of neonatal respiratory disease that is caused most often by a lack of surfactant in the lungs. A fetus's lungs start making surfactant during the third trimester of pregnancy, or weeks 26 through labor and delivery. Surfactant coats the insides of the air sacs, or alveoli, in the lungs. This helps keep the lungs open so breathing can occur after birth. To understand respiratory distress syndrome, it helps to learn about how the lungs work.

Without enough surfactant, the lungs may collapse when the newborn exhales. The newborn then has to work harder to breathe. He or she might not be able to get enough oxygen to support the body's organs.

Some full-term newborns develop RDS because they have faulty genes that affect how their bodies make surfactant.

Certain factors may increase the risk that your newborn will have RDS. These factors include:

Signs and symptoms of RDS include:

Depending on the severity of a newborn's RDS, he or she may develop other medical problems.

RDS is common in premature newborns. Thus, doctors usually recognize and begin treating the disorder as soon as babies are born. Doctors also do several tests to rule out other conditions that could be causing a newborn's breathing problems. The tests also can confirm that the doctors have diagnosed the condition correctly.

Treatment for RDS usually begins as soon as a newborn is born, sometimes in the delivery room. Treatments for RDS include surfactant replacement therapy, breathing support from a ventilator or nasal continuous positive airway pressure (NCPAP) machine, or other supportive treatments.

Most newborns who show signs of RDS are quickly moved to a neonatal intensive care unit (NICU). There they receive around-the-clock treatment from healthcare professionals who specialize in treating premature newborns.

Surfactant replacement therapy Babies who have RDS get surfactant until their lungs are able to start making the substance on their own. Surfactant is usually given through a breathing tube. The tube allows the surfactant to go directly into the baby's lungs. Once the surfactant is given, the breathing tube is connected to a ventilator, or the baby may get breathing support from NCPAP. Surfactant often is given right after birth in the delivery room to try to prevent or treat RDS. It also may be given several times in the days that follow, until the baby is able to breathe better. Some women are given medicines called corticosteroids during pregnancy. These medicines can speed up surfactant production and lung development in a fetus. Even if you had these medicines, your newborn may still need surfactant replacement therapy after birth.

Breathing support Newborns who have RDS often need breathing support, or oxygen therapy, until their lungs start making enough surfactant. Until recently, a mechanical ventilator usually was used. The ventilator was connected to a breathing tube that ran through the newborn's mouth or nose into the windpipe.

Help WikiMD:Join WikiMD as an an editor and help improve the page Respiratory distress syndrome, infant or others.

Quick links: Medicine Portal | Encyclopedia‏‎‏‎ | Gray's Anatomy‏‎ | Topics‏‎ |‏‎ Diseases‏‎ | Drugs | Wellness | Obesity‏‎ | Metabolic syndrome | Weight loss*
Disclaimer: The entire contents of WIKIMD.ORG are for informational purposes only and do not render medical advice or professional services. If you have a medical emergency, you should CALL 911 immediately! Given the nature of the wiki, the information provided may not be accurate, misleading and or incorrect. Use the information on this wiki at your own risk! See full Disclaimer.
Link to this page: <a href="http://www.wikimd.org/wiki/Respiratory_distress_syndrome,_infant">Respiratory distress syndrome, infant</a>