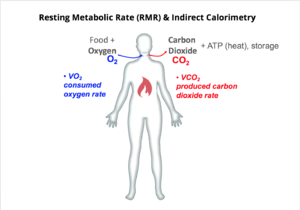 In order to measure resting metabolic rate, there are a few methods used - dual-energy X-ray absorptiometry DXA instruments or indirect calorimetry where a person breaths into and from a small device that monitors the amount of oxygen consumed in a small time frame which is then projected for the entire day.

The direct effects of physical activity interventions on energy expenditure are relatively small when placed in the context of total daily energy demands. Hence, the suggestion has been made that exercise produces energetic benefits in other components of the daily energy budget, thus generating a net effect on energy balance much greater than the direct energy cost of the exercise alone. Resting metabolic rate (RMR) is the largest component of the daily energy budget in most human societies and, therefore, any increases in RMR in response to exercise interventions are potentially of great importance. Animal studies have generally shown that single exercise events and longer-term training produce increases in RMR. This effect is observed in longer-term interventions despite parallel decreases in body mass and fat mass. Flight is an exception, as both single flights and long-term flight training induce reductions in RMR. Studies in animals that measure the effect of voluntary exercise regimens on RMR are less commonly performed and do not show the same response as that to forced exercise. In particular, they indicate that exercise does not induce elevations in RMR. Many studies of human subjects indicate a short-term elevation in RMR in response to single exercise events (generally termed the excess post-exercise O2 consumption; EPOC). This EPOC appears to have two phases, one lasting < 2 h and a smaller much more prolonged effect lasting up to 48 h. Many studies have shown that long-term training increases RMR, but many other studies have failed to find such effects. Data concerning long-term effects of training are potentially confounded by some studies not leaving sufficient time after the last exercise bout for the termination of the long-term EPOC. Long-term effects of training include increases in RMR due to increases in lean muscle mass. Extreme interventions, however, may induce reductions in RMR, in spite of the increased lean tissue mass, similar to the changes observed in animals in response to flight.

^Resting metabolic rate (article) is provided for informational purposes only. No expressed or implied warranties as to the validity of content.
WikiMD is not a substitute for professional advice. By accessing and using WikiMD you agree to the terms of use.
Templates etc. when imported from Wikipedia, are licensed under CC BY-SA 3.0. See full disclaimers.
Retrieved from "http://www.wikimd.org/wiki/index.php?title=Resting_metabolic_rate&oldid=2171587"
Categories: