A salad is a serving in a meal that includes leaf vegetables such as lettuce, spinach, or arugula. Uncooked or cold cooked vegetables that are sliced into small pieces (for example tomato or onion) are then mixed with the leaf vegetables.

A salad dressing or vinaigrette is then poured on top of the vegetables. Salad dressings and vinaigrettes are a mixture of oil, herbs, spices, and flavorings. 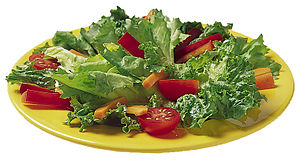 A green salad or garden salad has leafy vegetables such as lettuce, spinach, or rocket (arugula). The salad leaves may be cut or torn into bite-sized fragments and tossed together (a tossed salad). They may also have nuts or croutons.

A wedge salad is made from a head of lettuce (such as iceberg) halved or quartered, with other ingredients on top.[1]

Vegetables other than greens may be used in a salad. Common raw vegetables used in a salad include cucumbers, peppers, tomatoes, onions, carrots, celery, and radishes. Other ingredients include mushrooms, avocado, olives, hard boiled egg, artichoke hearts, heart of palm, green beans, cheeses.

Fruit salads are made of fruit, and include the fruit cocktail that can be made fresh or from canned fruit.[2]

Dessert salads rarely include leafy greens and are often sweet. Common variants are made with gelatin or whipped cream; e.g. jello salad, pistachio salad, and ambrosia. Other forms of dessert salads include snickers salad, glorified rice, and cookie salad popular in parts of the Midwestern United States.

A composed salad is a salad arranged on a plate rather than put into a bowl.[3][4] It can be used as a meal in itself rather than as a part of a meal.[4]

A green salad is often served with a salad dressing. Some examples include:

The purpose of salad dressing depends across cultures. There are many often used salad dressings in North America. Traditional dressings in southern Europe are vinaigrettes, while mayonnaise is predominant in eastern European countries and Russia. In Denmark dressings are often based on crème fraîche. In China, where Western salad is a recent adoption from Western cuisine, the term salad dressing (沙拉酱, shalajiang) means to mayonnaise or mayonnaise-based dressings.

There are many vegetables and other fare that are often added to salads. Some of them include:

Quick links: Medicine Portal | Encyclopedia‏‎‏‎ | Gray's Anatomy‏‎ | Topics‏‎ |‏‎ Diseases‏‎ | Drugs | Wellness | Obesity‏‎ | Metabolic syndrome | Weight loss*
Disclaimer: The entire contents of WIKIMD.ORG are for informational purposes only and do not render medical advice or professional services. If you have a medical emergency, you should CALL 911 immediately! Given the nature of the wiki, the information provided may not be accurate, misleading and or incorrect. Use the information on this wiki at your own risk! See full Disclaimer.
Link to this page: <a href="http://www.wikimd.org/wiki/Salad">Salad</a>