Shigellosis is a disease caused by a group of bacteria called Shigella. 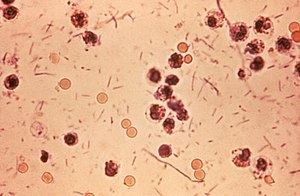 Shigellosis is a diarrheal disease caused by a group of bacteria called Shigella. There are four different species of Shigella:

S. dysenteriae and S. boydii are rare in the United States, though they continue to be important causes of disease in the developing world. Shigella dysenteriae type 1 can be deadly .

Symptoms often develop about 1 to 7 days (average 3 days) after coming into contact with the bacteria. Symptoms include:

About 1 in 10 children (under age 15) with severe shigella enteritis develop nervous system problems. These may include febrile seizures (also called a "fever fit") when body temperature rises quickly and the child has seizures. A brain disease (encephalopathy) with headache, lethargy, confusion, and stiff neck can also develop.

If you have symptoms of shigellosis, your health care provider will check for:

Prevention includes properly handling, storing, and preparing food, and good personal hygiene. Handwashing is the most effective way to prevent shigellosis. Avoid food and water that may be contaminated.

Insufficient data exist, but it is estimated to have caused the death of 34,000 children under the age of five in 2013, and 40,000 deaths in people over five years of age. Shigella also causes about 580,000 cases annually among travelers and military personnel from industrialized countries.

Help WikiMD:Join WikiMD as an an editor and help improve the page Shigellosis or others.

Quick links: Medicine Portal | Encyclopedia‏‎‏‎ | Gray's Anatomy‏‎ | Topics‏‎ |‏‎ Diseases‏‎ | Drugs | Wellness | Obesity‏‎ | Metabolic syndrome | Weight loss*
Disclaimer: The entire contents of WIKIMD.ORG are for informational purposes only and do not render medical advice or professional services. If you have a medical emergency, you should CALL 911 immediately! Given the nature of the wiki, the information provided may not be accurate, misleading and or incorrect. Use the information on this wiki at your own risk! See full Disclaimer.
Link to this page: <a href="http://www.wikimd.org/wiki/Shigellosis">Shigellosis</a>