The skull is supported on the summit of the vertebral column, and is of an oval shape, wider behind than in front. It is composed of a series of flattened or irregular bones which, with one exception (the mandible), are immovably jointed together.

It is divisible into two parts: (1) the cranium which lodges and protects the brain, consists of eight bones, and (2) the skeleton of the face of fourteen, as follows:

In the Basle nomenclature, certain bones developed in association with the nasal capsule, viz., the inferior nasal conchae, the lacrimals, the nasals, and the vomer, are grouped as cranial and not as facial bones. The hyoid bone, situated at the root of the tongue and attached to the base of the skull by ligaments, is described in this section.

About WikiMD: The article, The Skull, is part of WikiMD.
WikiMD is a free medical encyclopedia and wellnesspedia moderated by medical professionals. 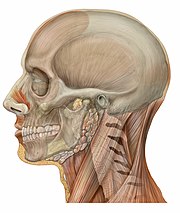 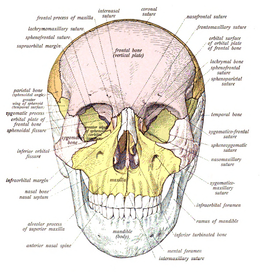 Human skull from the front 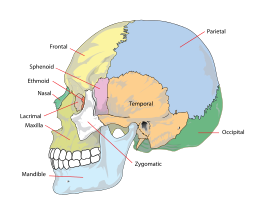 Side bones of skull

The human skull is the bony structure that forms the head in the human skeleton. It supports the structures of the face and forms a cavity for the brain. Like the skulls of other vertebrates, it protects the brain from injury.[1]

The skull consists of three parts, of different embryological origin—the neurocranium, the sutures, and the facial skeleton (also called the membraneous viscerocranium). The neurocranium (or braincase) forms the protective cranial cavity that surrounds and houses the brain and brainstem.[2] The upper areas of the cranial bones form the calvaria (skullcap). The membranous viscerocranium includes the mandible.

The sutures are fairly rigid joints between bones of the neurocranium.

The facial skeleton is formed by the bones supporting the face.