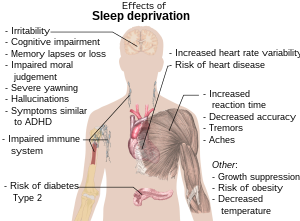 Sleep debt or sleep deficit is the cumulative effect of not getting enough sleep. A large sleep debt may lead to mental or physical fatigue.

It has been found that there are 80 proteins in the brain, called "sleep need index phosphoproteins" (SNIPPs), which become more and more phosphorylated during waking hours, and are dephosphorylated during sleep. The phosphorylation is aided by a protein called Sik3. There is a kind of mutant mouse called Sleepy with a mutated version of this protein (called SLEEPY) which is more active than the normal version, resulting in the mice being constantly sleepy and showing more slow-wave activity during non-REM sleep, which is the best measurable index of sleep need known. Inhibiting Sik3 decreases phosphorylation and slow-wave activity in both normal and mutant mice.[2][3]

There is debate among researchers as to whether the concept of sleep debt describes a measurable phenomenon. The September 2004 issue of the journal Sleep contains dueling editorials from two leading sleep researchers, David F. Dinges[4] and Jim Horne.[5] A 1997 experiment conducted by psychiatrists at the University of Pennsylvania School of Medicine suggested that cumulative nocturnal sleep debt affects daytime sleepiness, particularly on the first, second, sixth, and seventh days of sleep restriction.[6]

In one study, subjects were tested using the psychomotor vigilance task (PVT). Different groups of people were tested with different sleep times for two weeks: 8 hours, 6 hours, 4 hours, and total sleep deprivation. Each day they were tested for the number of lapses on the PVT. The results showed that as time went by, each group's performance worsened, with no sign of any stopping point. Moderate sleep deprivation was found to be detrimental; people who slept 6 hours a night for 10 days had similar results to those who were completely sleep deprived for 1 day.[7][8]

Sleep debt has been tested in a number of studies through the use of a sleep onset latency test.[9] This test attempts to measure how easily a person can fall asleep. When this test is done several times during a day, it is called a multiple sleep latency test (MSLT). The subject is told to go to sleep and is awakened after determining the amount of time it took to fall asleep. The Epworth Sleepiness Scale (ESS), an eight item questionnaire with scores ranging from 0 to 24, is another tool used to screen for potential sleep debt.

A January 2007 study from Washington University in St. Louis suggests that saliva tests of the enzyme amylase could be used to indicate sleep debt, as the enzyme increases its activity in correlation with the length of time a subject has been deprived of sleep.[10][11]

The control of wakefulness has been found to be strongly influenced by the protein orexin. A 2009 study from Washington University in St. Louis has illuminated important connections between sleep debt, orexin, and amyloid beta, with the suggestion that the development of Alzheimer's disease could hypothetically be a result of chronic sleep debt or excessive periods of wakefulness.[12]

Quick links: Medicine Portal | Encyclopedia‏‎‏‎ | Gray's Anatomy‏‎ | Topics‏‎ |‏‎ Diseases‏‎ | Drugs | Wellness | Obesity‏‎ | Metabolic syndrome | Weight loss*
Disclaimer: The entire contents of WIKIMD.ORG are for informational purposes only and do not render medical advice or professional services. If you have a medical emergency, you should CALL 911 immediately! Given the nature of the wiki, the information provided may not be accurate, misleading and or incorrect. Use the information on this wiki at your own risk! See full Disclaimer.
Link to this page: <a href="http://www.wikimd.org/wiki/Sleep_debt">Sleep debt</a>