Squamous cell carcinomas (SCCs), also known as epidermoid carcinomas, comprise a number of different types of cancer that result from squamous cells.[1] These cells form on the surface of the skin, on the lining of hollow organs in the body, and on the lining of the respiratory and digestive tracts.[1]

Despite sharing the name "squamous cell carcinoma", the SCCs of different body sites can show differences in their presented symptoms, natural history, prognosis, and response to treatment.

Human papillomavirus infection has been associated with SCCs of the oropharynx, lung,[2] fingers,[3] and anogenital region. 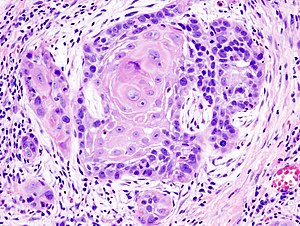 About 90%[4] of cases of head and neck cancer (cancer of the mouth, nasal cavity, nasopharynx, throat and associated structures) are due to SCC.

Esophageal cancer may be due to either esophageal squamous cell carcinoma (ESCC) or adenocarcinoma (EAC). SCCs tend to occur closer to the mouth, while adenocarcinomas occur closer to the stomach. Dysphagia (difficulty swallowing, solids worse than liquids) and painful swallowing are common initial symptoms. If the disease is localized, surgical removal of the affected esophagus may offer the possibility of a cure. If the disease has spread, chemotherapy and radiotherapy are commonly used. 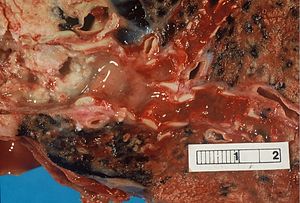 Photograph of a squamous cell carcinoma: Tumour is on the left, obstructing the bronchus (lung), beyond the tumour, the bronchus is inflamed and contains mucus.

When associated with the lung, it is typically a centrally located large-cell cancer (nonsmall-cell lung cancer). It often has a paraneoplastic syndrome causing ectopic production of parathyroid hormone-related protein, resulting in hypercalcemia, but paraneoplastic syndrome is more commonly associated with small-cell lung cancer. It is primarily due to smoking.[6]

Human papillomavirus (HPV), primarily HPV 16 and 18, are strongly implicated in the development of SCC of the penis. Three carcinomas in situ are associated with SCCs of the penis:

When associated with the prostate, squamous cell carcinoma is very aggressive in nature. It is difficult to detect as no increase in prostate-specific antigen levels is seen, meaning that the cancer is often diagnosed at an advanced stage.

Vaginal SCC spreads slowly and usually stays near the vagina, but may spread to the lungs and liver. This is the most common type of vaginal cancer.

Cancer can be considered a very large and exceptionally heterogeneous family of malignant diseases, with squamous cell carcinomas comprising one of the largest subsets.[9][10][11] All SCC lesions are thought to begin via the repeated, uncontrolled division of cancer stem cells of epithelial lineage or characteristics.[citation needed] SCCs arise from squamous cells, which are flat cells that line many areas of the body. Accumulation of these cancer cells causes a microscopic focus of abnormal cells that are, at least initially, locally confined within the specific tissue in which the progenitor cell resided. This condition is called squamous cell carcinoma in situ, and it is diagnosed when the tumor has not yet penetrated the basement membrane or other delimiting structure to invade adjacent tissues. Once the lesion has grown and progressed to the point where it has breached, penetrated, and infiltrated adjacent structures, it is referred to as "invasive" squamous cell carcinoma. Once a carcinoma becomes invasive, it is able to spread to other organs and cause the formation of a metastasis, or "secondary tumor".

The International Classification of Diseases for Oncology (ICD-O) system lists a number of morphological subtypes and variants of malignant squamous cell neoplasms, including:[12]

Other variants of SCCs are recognized under other systems, such as keratoacanthoma.

One method of classifying squamous cell carcinomas is by their appearance under microscope. Subtypes may include:

Studies have found evidences for an association between diet and skin cancers, including SCC. The consumption of high-fat dairy foods increases SCC tumor risk in people with previous skin cancer. Green leafy vegetables may help prevent development of subsequent SCC and multiple studies found that raw vegetables, citrus fruits and noncitrus fruits are significantly protective against SCC risk.[16][17] On the other hand, consumption of whole milk, yogurt, and cheese may increase SCC risk in susceptible people. [18] In addition, meat and fat dietary pattern can increase the risk of SCC in people without a history of SCC, but the association is again more prominent in people with a history of skin cancer.[19] Tobacco smoking and a dietary pattern characterized by high beer and liquor intake also increase the risk of SCC significantly.[20][16]

Quick links: Medicine Portal | Encyclopedia‏‎‏‎ | Gray's Anatomy‏‎ | Topics‏‎ |‏‎ Diseases‏‎ | Drugs | Wellness | Obesity‏‎ | Metabolic syndrome | Weight loss*
Disclaimer: The entire contents of WIKIMD.ORG are for informational purposes only and do not render medical advice or professional services. If you have a medical emergency, you should CALL 911 immediately! Given the nature of the wiki, the information provided may not be accurate, misleading and or incorrect. Use the information on this wiki at your own risk! See full Disclaimer.
Link to this page: <a href="http://www.wikimd.org/wiki/Squamous_cell_carcinoma">Squamous cell carcinoma</a>