Status epilepticus (SE) is a single seizure lasting more than five minutes or two or more seizures within a five-minute period without the person returning to normal between them.[1] Previous definitions used a 30-minute time limit.[2] The seizures can be of the tonic–clonic type, with a regular pattern of contraction and extension of the arms and legs, or of types that do not involve contractions, such as absence seizures or complex partial seizures.[1] Status epilepticus is a life-threatening medical emergency, particularly if treatment is delayed.[1]

Status epilepticus may occur in those with a history of epilepsy as well as those with an underlying problem of the brain.[2] These underlying brain problems may include trauma, infections, or strokes among others.[2] Diagnosis often involves checking the blood sugar, imaging of the head, a number of blood tests, and an electroencephalogram.[1] Psychogenic nonepileptic seizures may present similarly.[1] Other conditions that may also appear to be SE include low blood sugar, movement disorders, meningitis, and delirium among others.[1]

Benzodiazepines are the preferred initial treatment after which typically phenytoin is given.[1] Possible benzodiazepines include intravenous lorazepam as well as intramuscular injections of midazolam.[3] A number of other medications may be used if these are not effective such as valproic acid, phenobarbital, propofol, or ketamine.[1] Intubation may be required to help maintain the person's airway.[1] Between 10 and 30% of people who have status epilepticus die within 30 days.[1] The underlying cause, the person's age, and the length of the seizure are important factors in the outcome.[2] Status epilepticus occurs in up to 40 per 100,000 people per year.[2] It makes up about 1% of people who visit the emergency department.[1]

Status epilepticus can be divided into two categories: convulsive and nonconvulsive (NCSE).[1]

Convulsive status epilepticus presents with a regular pattern of contraction and extension of the arms and legs.[1]

Epilepsia partialis continua is a variant involving hour-, day-, or even week-long jerking. It is a consequence of vascular disease, tumors, or encephalitis, and is drug-resistant.

Generalized myoclonus is commonly seen in comatose people following CPR and is seen by some as an indication of catastrophic damage to the neocortex.[4]

Nonconvulsive status epilepticus is a relatively long duration change in a person's level of consciousness without large scale bending and extension of the limbs due to seizure activity.[7] It is of two main types with either prolonged complex partial seizures or absence seizures.[7] Up to a quarter of cases of SE are nonconvulsive.[7]

In the case of complex partial status epilepticus, the seizure is confined to a small area of the brain, normally the temporal lobe. Absence status epilepticus is marked by a generalized seizure affecting the whole brain. An EEG is needed to differentiate between the two conditions. This results in episodes characterized by a long-lasting stupor, staring, and unresponsiveness.[citation needed]

Only 25% of people who experience seizures or status epilepticus have epilepsy.[8] The following is a list of possible causes:

Nonconvulsive status epilepticus is believed to be under-diagnosed.[10] 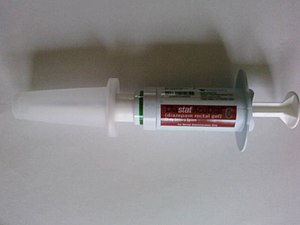 Diazepam that can be inserted rectally is often prescribed to caregivers of people with epilepsy. This enables treatment of multiple seizures prior to being able to seek medical care.

Benzodiazepines are the preferred initial treatment after which typically phenytoin or fosphenytoin is given.[1] First aid guidelines for seizures state that, as a rule, an ambulance should be called for seizures lasting longer than five minutes (or sooner if this is the person's first seizure episode and no precipitating factors are known, or if SE happens to a person with epilepsy whose seizures were previously absent or well controlled for a considerable time period).

When given intravenously, lorazepam appears to be superior to diazepam for stopping seizure activity.[3][11] Intramuscular midazolam appears to be a reasonable option especially in those who are not in hospital.[3]

The benzodiazepine of choice in North America for initial treatment is lorazepam, due to its relatively long duration of action (2–8 hours) when injected, and rapid onset of action, which is thought to be due to its high affinity for GABA receptors and low lipid solubility, which causes it to remain in the vascular compartment. If lorazepam is not available, or intravenous access is not possible, then diazepam should be given.[12]

In several countries outside North America, intravenous clonazepam is regarded as the drug of first choice. For instance, a guideline from the Netherlands recommends clonazepam.[13] Cited advantages of clonazepam include a longer duration of action than diazepam, and a lower propensity for the development of acute tolerance than lorazepam.[14] The use of clonazepam for this indication has not caught on in North America, as it is not available as an intravenous formulation there.[14]

Particularly in children, another popular treatment choice is midazolam, given into the side of the mouth or the nose.[15] Sometimes, the failure of lorazepam alone is considered to be enough to classify a case of SE as resistant to treatment.

Phenytoin was once another first-line therapy,[16] although the prodrug fosphenytoin can be administered three times as fast and with far fewer injection site reactions. If these or any other hydantoin derivatives are used, then cardiac monitoring is a must if they are administered intravenously. Because the hydantoins take 15–30 minutes to work, a benzodiazepine or barbiturate is often coadministered. Because of diazepam's short duration of action, they were often administered together anyway.

Before the benzodiazepines were invented, there were the barbiturates, which are still used today if benzodiazepines or the hydantoins are not an option. These are used to induce a barbituric coma. The barbiturate most commonly used for this is phenobarbital. Thiopental or pentobarbital may also be used for that purpose if the seizures have to be stopped immediately or if the person has already been compromised by the underlying illness or toxic/metabolic-induced seizures; however, in those situations, thiopental is the agent of choice.

If this proves ineffective or if barbiturates cannot be used for some reason, then a general anesthetic such as propofol[17] may be tried; sometimes it is used second after the failure of lorazepam.[18] This also means putting the people on artificial ventilation. Propofol has been shown to be effective in suppressing the jerks seen in myoclonus status epilepticus.[19]

Ketamine, an NMDA antagonist drug, can be used as a last resort for drug-resistant status epilepticus.[20]

Lidocaine has been used in cases that do not improve with other more typical medications.[21] One concern is that seizures often begin again 30 minutes after it is stopped.[21] Additionally, it is not recommended in those with heart or liver problems.[21]

Between 10 and 30% of people who have status epilepticus die within 30 days.[1] The great majority of these people have an underlying brain condition causing their status seizure such as brain tumor, brain infection, brain trauma, or stroke. However, people with diagnosed epilepsy who have a status seizure also have an increased risk of death if their condition is not stabilized quickly, their medication and sleep regimen adapted and adhered to, and stress and other stimulant (seizure trigger) levels controlled. However, with optimal neurological care, adherence to the medication regimen, and a good prognosis (no other underlying uncontrolled brain or other organic disease), the person—even people who have been diagnosed with epilepsy—in otherwise good health can survive with minimal or no brain damage, and can decrease risk of death and even avoid future seizures.[8]

Allopregnanolone is being studied in a clinical trial by the Mayo Clinic to treat super-resistant status epilepticus.[22]

Quick links: Medicine Portal | Encyclopedia‏‎‏‎ | Gray's Anatomy‏‎ | Topics‏‎ |‏‎ Diseases‏‎ | Drugs | Wellness | Obesity‏‎ | Metabolic syndrome | Weight loss*
Disclaimer: The entire contents of WIKIMD.ORG are for informational purposes only and do not render medical advice or professional services. If you have a medical emergency, you should CALL 911 immediately! Given the nature of the wiki, the information provided may not be accurate, misleading and or incorrect. Use the information on this wiki at your own risk! See full Disclaimer.
Link to this page: <a href="http://www.wikimd.org/wiki/Status_epilepticus">Status epilepticus</a>