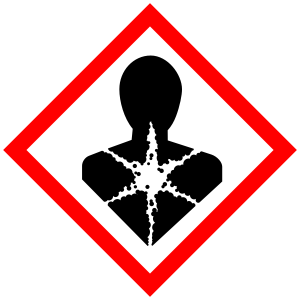 This symbol shows that a substance is damaging to human health. This includes substances that cause birth defects.

A teratogen is a material that can cause congenital defects. Some things can be teratogens, including some chemicals, medications, and infectious diseases.

Alcohol is the most common cause of congenital disorders that can be prevented.[3] Alcohol is poisonous to a fetus and can cause brain damage.[4] Drinking alcohol while pregnant can cause the fetus to get fetal alcohol syndrome.[3]

Illegal drugs, like heroin and cocaine, are also poisonous to the fetus and can cause many different congenital problems. For example, cocaine use during pregnancy can cause microcephaly (a smaller head size than usual) and problems with the way the fetus's urinary system and genitals grow.[1]

Baby born to a mother who took thalidomide while pregnant

Some medications can also hurt the fetus if its mother takes them while she is pregnant. For example:[1][2]p.23-6

Before the 1960s, many countries did not have rules about testing medications for their effects on fetuses.[5] This changed partly because of thalidomide. This medication was given to pregnant women for nausea in the 1950s and 1960s. Between 1956 and 1962, more than 10,000 children in 46 different countries were born with birth defects, like arms and legs that had not grown.[6] Thalidomide had not been tested well enough before it started being prescribed.[6] Now, many countries require more testing before a medication can be said to be safe during pregnancy.[5]

If a woman gets an infection while she is pregnant, sometimes the infection can affect her fetus. The placenta protects the fetus from many different viruses, bacteria, and other pathogens that cause infections. However, some pathogens can get through the placenta and infect the fetus. This is called vertical transmission. Some of these infections can cause birth defects.

Examples of infections that can cause birth defects include:

Some chemicals can cause birth defects, if a pregnant woman is exposed to enough of them. For example:[11]

High levels of ionizing radiation can cause birth defects.[2]p.23-8

Things that are not teratogens

Examples of things that do not cause birth defects include:[11]

Quick links: Medicine Portal | Encyclopedia‏‎‏‎ | Gray's Anatomy‏‎ | Topics‏‎ |‏‎ Diseases‏‎ | Drugs | Wellness | Obesity‏‎ | Metabolic syndrome | Weight loss*
Disclaimer: The entire contents of WIKIMD.ORG are for informational purposes only and do not render medical advice or professional services. If you have a medical emergency, you should CALL 911 immediately! Given the nature of the wiki, the information provided may not be accurate, misleading and or incorrect. Use the information on this wiki at your own risk! See full Disclaimer.
Link to this page: <a href="http://www.wikimd.org/wiki/Teratogen">Teratogen</a>