The hypoglossal nerve (Figs. 794, 795) is the motor nerve of the tongue. Its fibers arise from the cells of the hypoglossal nucleus which is an upward prolongation of the base of the anterior column of gray substance of the medulla spinalis.

This nucleus is about 2 cm. in length, and its upper part corresponds with the trigonum hypoglossi or lower portion of the medial eminence of the rhomboid fossa (page 779). The lower part of the nucleus extends downward into the closed part of the medulla oblongata, and there lies in relation to the ventro-lateral aspect of the central canal.

The fibers run forward through the medulla oblongata, and emerge in the antero-lateral sulcus between the pyramid and the olive. The rootlets of this nerve are collected into two bundles, which perforate the dura mater separately, opposite the hypoglossal canal in the occipital bone, and unite together after their passage through it; in some cases the canal is divided into two by a small bony spicule.

The nerve descends almost vertically to a point corresponding with the angle of the mandible. It is at first deeply seated beneath the internal carotid artery and internal jugular vein, and intimately connected with the vagus nerve; it then passes forward between the vein and artery, and lower down in the neck becomes superficial below the Digastricus.

The nerve then loops around the occipital artery, and crosses the external carotid and lingual arteries below the tendon of the Digastricus. It passes beneath the tendon of the Digastricus, the Stylohyoideus, and the Mylohyoideus, lying between the last-named muscle and the Hyoglossus, and communicates at the anterior border of the Hyoglossus with the lingual nerve; it is then continued forward in the fibers of the Genioglossus as far as the tip of the tongue, distributing branches to its muscular substance.

Its branches of communication are, with the

The communications with the vagus take place close to the skull, numerous filaments passing between the hypoglossal and the ganglion nodosum of the vagus through the mass of connective tissue which unites the two nerves. As the nerve winds around the occipital artery it gives off a filament to the pharyngeal plexus. The communication with the sympathetic takes place opposite the atlas by branches derived from the superior cervical ganglion, and in the same situation the nerve is joined by a filament derived from the loop connecting the first and second cervical nerves. The communications with the lingual take place near the anterior border of the Hyoglossus by numerous filaments which ascend upon the muscle.

The branches of distribution of the hypoglossal nerve are:

Of these branches, the meningeal, descending, thyrohyoid, and the muscular twig to the Geniohyoideus, are probably derived mainly from the branch which passes from the loop between the first and second cervical to join the hypoglossal (Fig. 795).

Meningeal Branches (dural branches)—As the hypoglossal nerve passes through the hypoglossal canal it gives off, according to Luschka, several filaments to the dura mater in the posterior fossa of the skull.

The Descending Ramus (ramus descendens; descendens hypoglossi), long and slender, quits the hypoglossal where it turns around the occipital artery and descends in front of or in the sheath of the carotid vessels; it gives a branch to the superior belly of the Omohyoideus, and then joins the communicantes cervicales from the second and third cervical nerves; just below the middle of the neck, to form a loop, the ansa hypoglossi From the convexity of this loop branches pass to supply the Sternohyoideus, the Sternothyreoideus, and the inferior belly of the Omohyoideus. According to Arnold, another filament descends in front of the vessels into the thorax, and joins the cardiac and phrenic nerves.

The Thyrohyoid Branch (ramus thyreohyoideus) arises from the hypoglossal near the posterior border of the hyoglossus; it runs obliquely across the greater cornu of the hyoid bone, and supplies the Thyreohyoideus muscle.

The Muscular Branches are distributed to the Styloglossus, Hyoglossus, Geniohyoideus, and Genioglossus. At the under surface of the tongue numerous slender branches pass upward into the substance of the organ to supply its intrinsic muscles. 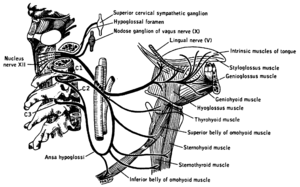 Schematic image of the hypoglossal nerve and innervation targets.

These muscles are involved in moving and manipulating the tongue.[1] The left and right genioglossus muscles in particular are responsible for protruding the tongue. The muscles, attached to the underside of the top and back parts of the tongue, cause the tongue to protrude and deviate towards the opposite side.[2] The hypoglossal nerve also supplies movements including clearing the mouth of saliva and other involuntary activities. The hypoglossal nucleus interacts with the reticular formation, involved in the control of several reflexive or automatic motions, and several corticonuclear originating fibers supply innervation aiding in unconscious movements relating to speech and articulation.[1]

Quick links: Medicine Portal | Encyclopedia‏‎‏‎ | Gray's Anatomy‏‎ | Topics‏‎ |‏‎ Diseases‏‎ | Drugs | Wellness | Obesity‏‎ | Metabolic syndrome | Weight loss*
Disclaimer: The entire contents of WIKIMD.ORG are for informational purposes only and do not render medical advice or professional services. If you have a medical emergency, you should CALL 911 immediately! Given the nature of the wiki, the information provided may not be accurate, misleading and or incorrect. Use the information on this wiki at your own risk! See full Disclaimer.
Link to this page: <a href="http://www.wikimd.org/wiki/The_Hypoglossal_Nerve">The Hypoglossal Nerve</a>