A child rolling their tongue.

Some people can roll their tongue into a tube. The reason why some people are able to and some are not is because of genetic inheritance, meaning that it is based on whether their parents are able to do it. Many schools use tongue rolling as an example of a genetic trait.

People who can roll their tongue can sometimes make a high pitched sound by blowing through their rolled tongue.

The root of the tongue is attached to the mandible and hyoid bone by muscles. It is because of these attachments that the tongue is not swallowed during deglutition. The nerve and vessels of the tongue enter through its root.

It is the anterior free end of the tongue, which comes into contact with the central incisors.

The bulk of tongue between the root and tip is called body. It has dorsal and ventral surfaces and right and left lateral margins.

The dorsal surface is convex on all the sides. It is divided by a V-shaped sulcus, the sulcus terminalis into two parts, viz.

The apex of the sulcus terminalis is marked by a blind foramen, the foramen caecum, which indicates the point of origin of the median thyroid diverticulum (thyroglossal duct) in the embryonic life. The features differ markedly in the oral and pharyngeal parts. The oral part presents the following features:

The dorsum of oral part presents a shallow median furrow/groove. The mucus membrane is moist and pink and appears velvety due to the presence of numerous papillae.

Papillae of the Tongue

The dorsum of pharyngeal part faces posteriorly and forms the base of tongue. The base of tongue constitutes the anterior wall of the oropharynx and can be inspected only by the use of a mirror or by a downward pressure on the tongue with a tongue spatula. The mucus membrane over the dorsum of pharyngeal part is devoid of papillae. It, however, appears uneven due to the presence of numerous lymphatic follicles in the underlying submucosa. These follicles are collectively termed lingual tonsil.

Ventral (inferior) surface of the tongue

The inferior surface of tongue is situated in the oral cavity only. The mucus membrane lining this surface is thin, smooth, and purplish. It is reflected onto the floor of the mouth. The under aspect of the tongue presents the following features:

Muscles of the Tongue

The tongue is divided into symmetrical right and left halves by a medial fibrous septum, which separates the muscles of two sides. Each half of the tongue contains four intrinsic and four extrinsic muscles. These are as follows:

They are confined to the tongue and are not attached to the bone. They occupy the upper part of the tongue and alter its shape. The intrinsic muscles are arranged in several planes. They run in three directions: longitudinal, horizontal, and vertical. The complex interlacing of fibers of these muscles is responsible for the astonishing way in which the tongue can change its shape, becoming wide and flat, narrow and thick, or rolled up laterally to become gutter shaped. The latter shape cannot be achieved by a small number of people and this inability is genetically determined. Intrinsic muscles occupy the upper part of the tongue and are attached to the submucous fibrous layer and to the median fibrous septum.

They attach the tongue to the mandible (genioglossus), the hyoid (hyoglossus), the styloid process (styloglossus), and the palate (palatoglossus) on each side.

Extrinsic muscles of the Tongue

The tongue is supplied by the following arteries: 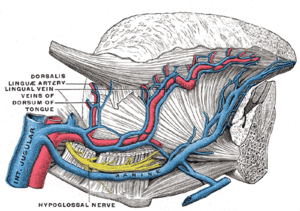 Blood supply of the Tongue

It is by the following veins:

The lymphatics emerging from the tongue are grouped into the following four sets:

The nerves supplying the tongue are as follows:

Anterior two-third of the tongue is supplied by:

Posterior one-third of the tongue is supplied by:

Nerves carrying taste sensations from the tongue are as follows:

This WikiMD article Tongue is a stub.
If you are a healthcare professional familiar with the topic Tongue, or
A subject matter expert or authority on Tongue, you can help us.
About | Mission | Paid editors welcome!