Trigeminal neuralgia (TN or TGN) is a chronic pain disorder that affects the trigeminal nerve.[1] There are two main types: typical and atypical trigeminal neuralgia.[1] The typical form results in episodes of severe, sudden, shock-like pain in one side of the face that lasts for seconds to a few minutes.[1] Groups of these episodes can occur over a few hours.[1] The atypical form results in a constant burning pain that is less severe.[1] Episodes may be triggered by any touch to the face.[1] Both forms may occur in the same person.[1] It is one of the most painful conditions, and can result in depression.[5]

The exact cause is unclear, but believed to involve loss of the myelin around the trigeminal nerve.[1][6] This may occur due to compression from a blood vessel as the nerve exits the brain stem, multiple sclerosis, stroke, or trauma.[1] Less common causes include a tumor or arteriovenous malformation.[1] It is a type of nerve pain.[1] Diagnosis is typically based on the symptoms, after ruling out other possible causes such as postherpetic neuralgia.[1]

Treatment includes medication or surgery.[1] The anticonvulsant carbamazepine or oxcarbazepine is usually the initial treatment, and is effective in about 80% of people.[6] Other options include lamotrigine, baclofen, gabapentin, and pimozide.[6] Amitriptyline may help with the pain, but opioids are not usually effective in the typical form.[1] In those who do not improve or become resistant to other measures, a number of types of surgery may be tried.[6]

It is estimated that 1 in 8,000 people per year develop trigeminal neuralgia.[1] It usually begins in people over 50 years old, but can occur at any age.[1] Women are more commonly affected than men.[1] The condition was first described in detail in 1773 by John Fothergill.[7] 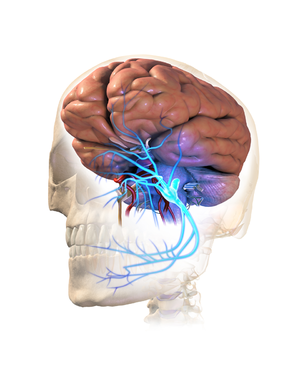 An individual attack usually lasts from a few seconds to several minutes or hours, but these can repeat for hours with very short intervals between attacks. In other instances, only 4-10 attacks are experienced daily. The episodes of intense pain may occur paroxysmally. To describe the pain sensation, people often describe a trigger area on the face so sensitive that touching or even air currents can trigger an episode; however, in many people, the pain is generated spontaneously without any apparent stimulation. It affects lifestyle as it can be triggered by common activities such as eating, talking, shaving and brushing teeth. The wind, chewing, and talking can aggravate the condition in many patients. The attacks are said by those affected to feel like stabbing electric shocks, burning, sharp, pressing, crushing, exploding or shooting pain that becomes intractable.[citation needed]

The pain also tends to occur in cycles with remissions lasting months or even years. 1–6% of cases occur on both sides of the face but extremely rare for both to be affected at the same time. This normally indicates problems with both trigeminal nerves, since one serves strictly the left side of the face and the other serves the right side. Pain attacks are known to worsen in frequency or severity over time, in some people. Pain may migrate to other branches over time but in some people remains very stable.[9]

Rapid spreading of the pain, bilateral involvement or simultaneous participation with other major nerve trunks (such as Painful Tic Convulsif of nerves V & VII or occurrence of symptoms in the V and IX nerves) may suggest a systemic cause. Systemic causes could include multiple sclerosis or expanding cranial tumors.[10]

The severity of the pain makes it difficult to wash the face, shave, and perform good oral hygiene. The pain has a significant impact on activities of daily living especially as people live in fear of when they are going to get their next attack of pain and how severe it will be. It can lead to severe depression and anxiety.[11]

However, not all people will have the symptoms described above and there are variants of TN. One of which is atypical trigeminal neuralgia ("trigeminal neuralgia, type 2" or trigeminal neuralgia with concomitant pain),[12] based on a recent classification of facial pain.[13] In these instances there is also a more prolonged lower severity background pain that can be present for over 50% of the time and is described more as a burning or prickling, rather than a shock.

Trigeminal neuropathic pain is similar to TN2 but can have the electric pulses associated with classic TN. The pain is usually constant and can also give off a tingling, numbness sensation. This pain is due to unintentional damage to one or more of the trigeminal nerves from trauma, oral surgery, dentistry work, etc. It is difficult to treat but sufferers are usually given the same anticonvulsant and tricyclics antidepressant medicines as with the other types of neuralgias. Surgical options are DREZ (dorsal root entry zone) lesion and MCS or Motor Cortex Stimulation.

TN needs to be distinguished from other forms of unilateral pain which are related to damage to the trigeminal nerve by trauma to the face or dental treatments. This is often termed painful trigeminal neuropathy or post-traumatic neuropathy as some sensory changes can be noted e.g. decrease in pain sensation or temperature. This is important as different care pathways are used. Trigeminal pain can also occur after an attack of herpes zoster, and post-herpetic neuralgia has the same manifestations as in other parts of the body. Trigeminal deafferentation pain (TDP), also termed anesthesia dolorosa, is from intentional damage to a trigeminal nerve following attempts to surgically fix a nerve problem. This pain is usually constant with a burning sensation and numbness. TDP is very difficult to treat as further surgeries are usually ineffective and possibly detrimental to the person.

The trigeminal nerve is a mixed cranial nerve responsible for sensory data such as tactition (pressure), thermoception (temperature), and nociception (pain) originating from the face above the jawline; it is also responsible for the motor function of the muscles of mastication, the muscles involved in chewing but not facial expression.[citation needed]

Several theories exist to explain the possible causes of this pain syndrome. It was once believed that the nerve was compressed in the opening from the inside to the outside of the skull; but leading research indicates that it is an enlarged or lengthened blood vessel – most commonly the superior cerebellar artery – compressing or throbbing against the microvasculature of the trigeminal nerve near its connection with the pons.[14] Such a compression can injure the nerve's protective myelin sheath and cause erratic and hyperactive functioning of the nerve. This can lead to pain attacks at the slightest stimulation of any area served by the nerve as well as hinder the nerve's ability to shut off the pain signals after the stimulation ends. This type of injury may rarely be caused by an aneurysm (an outpouching of a blood vessel); by an AVM (arteriovenous malformation);[15] by a tumor; such as an arachnoid cyst or meningioma in the cerebellopontine angle;[16] or by a traumatic event such as a car accident.[17]

Short-term peripheral compression is often painless.[5] Persistent compression results in local demyelination with no loss of axon potential continuity. Chronic nerve entrapment results in demyelination primarily, with progressive axonal degeneration subsequently.[5] It is, "therefore widely accepted that trigeminal neuralgia is associated with demyelination of axons in the Gasserian ganglion, the dorsal root, or both."[18] It has been suggested that this compression may be related to an aberrant branch of the superior cerebellar artery that lies on the trigeminal nerve.[18] Further causes, besides an aneurysm, multiple sclerosis or cerebellopontine angle tumor, include: a posterior fossa tumor, any other expanding lesion or even brainstem diseases from strokes.[18]

Trigeminal neuralgia is found in 3–4% of people with multiple sclerosis, according to data from seven studies.[19][20] It has been theorized that this is due to damage to the spinal trigeminal complex.[21] Trigeminal pain has a similar presentation in patients with and without MS.[22]

Postherpetic neuralgia, which occurs after shingles, may cause similar symptoms if the trigeminal nerve is damaged.[citation needed]

When there is no [apparent] structural cause, the syndrome is called idiopathic.

Trigeminal neuralgia is diagnosed via the result of neurological and physical tests, as well as the individual’s medical history.[23]

As with many conditions without clear physical or laboratory diagnosis, TN is sometimes misdiagnosed. A TN sufferer will sometimes seek the help of numerous clinicians before a firm diagnosis is made.

There is evidence that points towards the need to quickly treat and diagnose TN. It is thought that the longer a patient suffers from TN, the harder it may be to reverse the neural pathways associated with the pain.

The differential diagnosis includes temporomandibular disorder.[24] Since triggering may be caused by movements of the tongue or facial muscles, TN must be differentiated from masticatory pain that has the clinical characteristics of deep somatic rather than neuropathic pain. Masticatory pain will not be arrested by a conventional mandibular local anesthetic block.[10] One quick test a dentist might perform is a conventional inferior dental local anaesthetic block, if the pain is in this branch, as it will not arrest masticatory pain but will TN.[25]

The evidence for surgical therapy is poor.[31] Surgery is normally recommended only after medication has proved ineffective, or if side effects of medication are intolerable.[32] While there may be pain relief after surgery, there is also a considerable risk of side effects, such as facial numbness after the procedure.[31] Microvascular decompression appears to result in the longest pain relief.[31][33] Percutaneous radiofrequency thermorhizotomy may also be effective[34] as may stereotactic radiosurgery; however the effectiveness decreases with time.[35]

Surgical procedures can be separated into non-destructive and destructive:

All destructive procedures will cause facial numbness, post relief, as well as pain relief.[31]

Psychological and social support has found to play a key role in the management of chronic illnesses and chronic pain conditions, such as trigeminal neuralgia. Chronic pain can cause constant frustration to an individual as well as to those around them.[37] As a result, there are many advocacy groups. 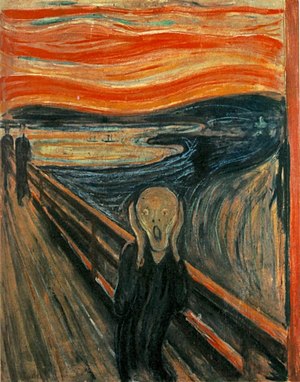 Edvard Munch's "The Scream" has been used as a symbol of facial pain generally,[38] and also specifically of trigeminal neuralgia.[39]

Trigeminal neuralgia was first described by physician John Fothergill and treated surgically by John Murray Carnochan, both of whom were graduates of the University of Edinburgh Medical School. Historically TN has been called "suicide disease" due to studies by Harvey Cushing involving 123 cases of TN during 1896 and 1912.[4][40]

Some individuals of note with TN include:

Quick links: Medicine Portal | Encyclopedia‏‎‏‎ | Gray's Anatomy‏‎ | Topics‏‎ |‏‎ Diseases‏‎ | Drugs | Wellness | Obesity‏‎ | Metabolic syndrome | Weight loss*
Disclaimer: The entire contents of WIKIMD.ORG are for informational purposes only and do not render medical advice or professional services. If you have a medical emergency, you should CALL 911 immediately! Given the nature of the wiki, the information provided may not be accurate, misleading and or incorrect. Use the information on this wiki at your own risk! See full Disclaimer.
Link to this page: <a href="http://www.wikimd.org/wiki/Trigeminal_neuralgia">Trigeminal neuralgia</a>