Not to be confused with De Quervain syndrome.

Trigger finger, also known as stenosing tenosynovitis, is a disorder characterized by catching or locking of the involved finger.[1] Pain may occur in the palm of the hand or knuckles.[2] The name is due to the popping sound made by the affected finger when moved.[1] Most commonly the ring finger or thumb is affected.[3]

Risk factors include repeated injury, diabetes, kidney disease, thyroid disease, and inflammatory disease.[2] The underlying mechanism involves the tendon sheath being too narrow for the flexor tendon.[2] This typically occurs at the level of the A1 pulley.[1] While often referred to as a type of stenosing tenosynovitis, little inflammation appears to be present.[2] Diagnosis is typically based on symptoms after excluding other possible causes.[1]

Initial treatment is generally with rest, splinting the finger, NSAIDs, or steroid injections.[2] If this is not effective surgery may be used.[2] Trigger finger is relatively common.[1] Females are affected more often than males.[2] Those in their 50s and 60s are most commonly affected.[1] The condition was formally described in 1850.[1]

Symptoms include catching or locking of the involved finger.[1] As the disease progresses pain may occur in the palm of the hand or knuckles.[2]

In the ring and middle fingers, often a nodule can be felt at the area of the hand where the palm meets the finger.[4]

The cause of trigger finger is unclear but several causes have been proposed.[1] It has also been called stenosing tenosynovitis (specifically digital tenosynovitis stenosans), but this may be a misnomer, as inflammation is not a predominant feature.

It has been speculated that repetitive forceful use of a digit leads to narrowing of the fibrous digital sheath in which it runs, but there is little scientific data to support this theory. The relationship of trigger finger to work activities is debatable and scientific evidence for[5] and against[6] hand use as a cause exist. While the mechanism is unclear, there is some evidence that triggering of the thumb is more likely to occur following surgery for carpal tunnel syndrome.[7] It may also occur in rheumatoid arthritis.

Diagnosis is made almost exclusively by history and physical examination alone. More than one finger may be affected at a time, though it usually affects the index, thumb, middle, or ring finger. The triggering is usually more pronounced late at night and into the morning, or while gripping an object firmly. 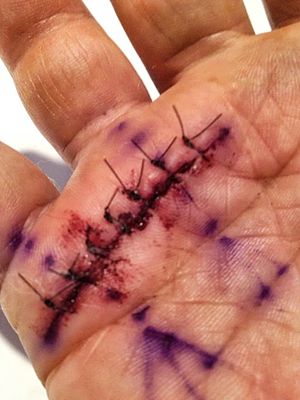 Treatment consists of injection of a corticosteroid such as methylprednisolone often combined with a local anesthetic (lidocaine) at the site of maximal inflammation or tenderness around the A1 pulley of the finger in the palm. The infiltration of the affected site can be performed using standard anatomic landmarks or sonographically guided, and often needs to be repeated 2 or three times to achieve remission. An irreducibly locked trigger, often associated with a flexion contracture of the PIP joint, should not be treated by injections.[9]

Injection of the tendon sheath with a corticosteroid is effective over weeks to months in more than half of people.[10]

When corticosteroid injection fails, the problem is predictably resolved by a relatively simple surgical procedure (usually outpatient, under local anesthesia). The surgeon will cut the sheath that is restricting the tendon.

One study suggests that the most cost-effective treatment is two trials of corticosteroid injection, followed by open release of the first annular pulley.[11] Choosing surgery immediately is the most expensive option and is often not necessary for resolution of symptoms.[11] A 2009 Cochrane review of corticosteroid injection for trigger finger found only two pseudo-randomized controlled trials for a total pooled success rate of only 37%.[12]

For symptoms that have persisted or recurred for more than 6 months and/or have been unresponsive to conservative treatment, surgical release of the pulley may be indicated.[citation needed] The main surgical approaches are percutaneous release and open release. The percutaneous approach, is preferred in some centers due to its reported shorter time of recuperation of motor function, less complications, and less painful.[13] Complication of the surgical management include, persistent trigger finger, bowstringing, digital nerve injury, and continued triggering.[14] Surgery instead of steroid injections may result in a lower recurrence rates, however the quality of the evidence is poor.[15]

Thread trigger finger release is an ultrasound guided minimally invasive procedure using a piece of dissecting thread to transect A1 pulley without incision. There is a theoretical greater risk of nerve damage associated with the percutaneous needle release as the technique is performed without seeing the A1 pulley.[16]

The natural history of disease for trigger finger remains uncertain.

There is some evidence that idiopathic trigger finger behaves differently in people with diabetes.[10]

While difficulty extending the proximal interphalangeal joint may persist for months, it benefits from exercises to stretch the finger straighter.

Quick links: Medicine Portal | Encyclopedia‏‎‏‎ | Gray's Anatomy‏‎ | Topics‏‎ |‏‎ Diseases‏‎ | Drugs | Wellness | Obesity‏‎ | Metabolic syndrome | Weight loss*
Disclaimer: The entire contents of WIKIMD.ORG are for informational purposes only and do not render medical advice or professional services. If you have a medical emergency, you should CALL 911 immediately! Given the nature of the wiki, the information provided may not be accurate, misleading and or incorrect. Use the information on this wiki at your own risk! See full Disclaimer.
Link to this page: <a href="http://www.wikimd.org/wiki/Trigger_finger">Trigger finger</a>