From WikiMD
Jump to navigation Jump to search
Share
For the lip feature, see cupid's bow. 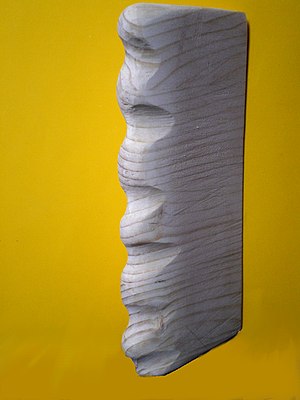 In anatomy, the term tubercle may describe a round nodule, small eminence, or warty outgrowth found on bones or skin, or, in cases of tuberculosis, in the lungs.

In addition to the types that exist in or on humans (as well as certain other animals) as described below, they are also found on the leading edge of Humpback Whale's flippers, improving fluid flow over the flipper's surface.[citation needed]

Within the human body there are numerous sites where tubercles develop. On bones they are generally the sites of muscle insertions. Within the lungs and on the genitals, tubercles are sites of disease.

Tubercles are usually found behind the last molar in the upper jaw, covered by the gum. Surgery can be done to make tubercles less prominent.[1]

The humerus of the upper arm has two tubercles, the greater tubercle and the lesser tubercle. These are situated at the proximal end of the bone, that is the end that connects with the scapula. The greater/lesser tubercule are located from the top of the acromion laterally and inferiorly. 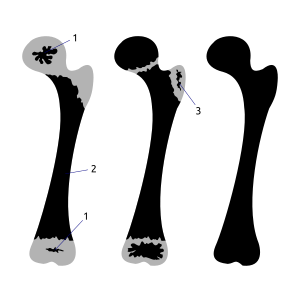 The most prominent tubercle of the tibia, a leg bone which is more commonly known as the shinbone or shankbone, is the tibial tuberosity. The tibial tuberosity is located on the tibia's anterior surface, distal to the medial condyle. It creates a bony prominence just below the patella, and can be easily located with the fingers. It creates an attachment point for the ligamentum patellae, or patellar ligament.

Tubercles in the lungs develop as a result of infection by the Mycobacterium tuberculosis bacterium in the disease tuberculosis. Granulomas form in the infected tissue and undergo necrosis in the centre. Tubercles are also known as tuberculous nodules.

Around the sixth week of gestation, six swellings of tissue called the hillocks of Hiss arise around the area that will form the ear canal. These eventually coalesce to form the outer ear. Darwin's tubercle, is a minor malformation of the junction of the fourth and fifth hillocks of Hiss. It is found in a substantial minority of people and takes the form of a cartilaginous node or bump on the rim of their outer ear, which is thought to be the vestige of a joint that allowed the top part of the ancestral ear to swivel or flop down over the opening to the ear.[2]

The genital tubercle is a small bump that eventually develops into a penis or a clitoris on a human fetus.

The septotubercular tract can be found in the human as well as in the sheep brain. It is found nearby the septohypothalamic tract. Its function to the brain is ambiguous at this point.[citation needed]

Also the tuberculum sellae is found at the base of the skull, which holds the hypophysis.[citation needed]

Quick links: Medicine Portal | Encyclopedia‏‎‏‎ | Gray's Anatomy‏‎ | Topics‏‎ |‏‎ Diseases‏‎ | Drugs | Wellness | Obesity‏‎ | Metabolic syndrome | Weight loss*
Disclaimer: The entire contents of WIKIMD.ORG are for informational purposes only and do not render medical advice or professional services. If you have a medical emergency, you should CALL 911 immediately! Given the nature of the wiki, the information provided may not be accurate, misleading and or incorrect. Use the information on this wiki at your own risk! See full Disclaimer.
Link to this page: <a href="http://www.wikimd.org/wiki/Tubercle_(anatomy)">Tubercle (anatomy)</a>