From WikiMD's free health, diet & wellness encyclopedia
Jump to navigation Jump to search
Share
This page contains changes which are not marked for translation.
Other languages:
English

A test that bounces sound waves off tissues and internal organs and changes the echoes into pictures(sonograms). Tissues of different densities reflect sound waves differently. 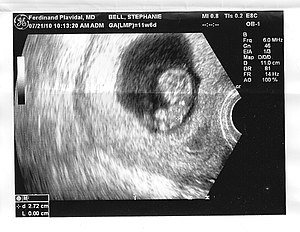 Ultrasound of the embryo

What is medical ultrasound?

Diagnostic ultrasound is a non-invasive diagnostic technique used to image inside the body. Ultrasound probes, called transducers, produce sound waves that have frequencies above the threshold of human hearing (above 20KHz), but most transducers in current use operate at much higher frequencies (in the megahertz (MHz) range). Most diagnostic ultrasoundprobes are placed on the skin. However, to optimize image quality, probes may be placed inside the body via the gastrointestinal tract, vagina, or blood vessels. In addition, ultrasound is sometimes used during surgery by placing a sterile probe into the area being operated on.

Therapeutic ultrasound also uses sound waves above the range of human hearing but does not produce images. Its purpose is to interact with tissues in the body such that they are either modified or destroyed. Among the modifications possible are: moving or pushing tissue, heating tissue, dissolving blood clots, or delivering drugs to specific locations in the body. These destructive, or ablative, functions are made possible by use of very high-intensity beams that can destroy diseased or abnormal tissues such as tumors. The advantage of using ultrasound therapies is that, in most cases, they are non-invasive. No incisions or cuts need to be made to the skin, leaving no wounds or scars.

How does it work?

Ultrasound waves are produced by a transducer, which can both emit ultrasound waves, as well as detect the ultrasound echoes reflected back. In most cases, the active elements in ultrasound transducers are made of special ceramic crystal materials called piezoelectrics. These materials are able to produce sound waves when an electric field is applied to them, but can also work in reverse, producing an electric field when a sound wave hits them. When used in an ultrasoundscanner, the transducer sends out a beam of sound waves into the body. The sound waves are reflected back to the transducer by boundaries between tissues in the path of the beam (e.g. the boundary between fluid and soft tissue or tissue and bone). When these echoes hit the transducer, they generate electrical signals that are sent to the ultrasound scanner. Using the speed of sound and the time of each echo’s return, the scanner calculates the distance from the transducer to the tissue boundary. These distances are then used to generate two-dimensional images of tissues and organs.

During an ultrasound exam, the technician will apply a gel to the skin. This keeps air pockets from forming between the transducer and the skin, which can block ultrasound waves from passing into the body.

Click here to watch a short video about how ultrasound works.

What is ultrasound used for?

Diagnostic ultrasound. Diagnostic ultrasound is able to non-invasively image internal organs within the body. However, it is not good for imaging bones or any tissues that contain air, like the lungs. Under some conditions, ultrasound can image bones (such as in a fetus or in small babies) or the lungs and lining around the lungs, when they are filled or partially filled with fluid. One of the most common uses of ultrasound is during pregnancy, to monitor the growth and development of the fetus, but there are many other uses, including imaging the heart, blood vessels, eyes, thyroid, brain, breast, abdominal organs, skin, and muscles. Ultrasoundimages are displayed in either 2D, 3D, or 4D (which is 3D in motion).

Another functional form of ultrasound is elastography, a method for measuring and displaying the relative stiffness of tissues, which can be used to differentiate tumors from healthy tissue. This information can be displayed as either color-coded maps of the relative stiffness; black-and white maps that display high-contrast images of tumors compared with anatomical images; or color-coded maps that are overlayed on the anatomical image. Elastography can be used to test for liver fibrosis, a condition in which excessive scar tissue builds up in the liver due to inflammation.

Ultrasound is also an important method for imaging interventions in the body. For example, ultrasound-guided needle biopsy helps physicians see the position of a needle while it is being guided to a selected target, such as a mass or a tumor in the breast. Also, ultrasound is used for real-time imaging of the location of the tip of a catheter as it is inserted in a blood vessel and guided along the length of the vessel. It can also be used for minimally invasive surgery to guide the surgeon with real-time images of the inside of the body.

Therapeutic or interventional ultrasound. Therapeutic ultrasound produces high levels of acoustic output that can be focused on specific targets for the purpose of heating, ablating, or breaking up tissue. One type of therapeutic ultrasound uses high-intensity beams of sound that are highly targeted, and is called High Intensity Focused Ultrasound (HIFU). HIFU is being investigated as a method for modifying or destroying diseased or abnormal tissues inside the body (e.g. tumors) without having to open or tear the skin or cause damage to the surrounding tissue. Either ultrasound or MRI is used to identify and target the tissue to be treated, guide and control the treatment in real time, and confirm the effectiveness of the treatment. HIFU is currently FDA approved for the treatment of uterine fibroids, to alleviate pain from bone metastases, and most recently for the ablation of prostate tissue. HIFU is also being investigated as a way to close wounds and stop bleeding, to break up clots in blood vessels, and to temporarily open the blood brain barrier so that medications can pass through.

Diagnostic ultrasound is generally regarded as safe and does not produce ionizing radiation like that produced by x-rays. Still, ultrasound is capable of producing some biological effects in the body under specific settings and conditions. For this reason, the FDA requires that diagnostic ultrasound devices operate within acceptable limits. The FDA, as well as many professional societies, discourage the casual use of ultrasound (e.g. for keepsake videos) and recommend that it be used only when there is a true medical need.

What are examples of NIBIB-funded projects using ultrasound?

The following are examples of current research projects funded by NIBIB that are developing new applications of ultrasound that are already in use or that will be in use in the future:

Acoustic Radiation Force Impulse Imaging (ARFI). ARFI is a new technique developed by researchers at Duke University with NIBIB support that uses ultrasound elastography to differentiate liver tumors from healthy tissue, as well as identify the presence of fibrosis. This non-invasive method could reduce unnecessary liver biopsies, which can be painful and sometimes dangerous. ARFI has received FDA approval and is now commercially available in the U.S. (Image on left courtesy of Katharine Nightengale, Ph.D., Duke Biomedical Engineering).

Low-cost, miniature ultrasound. Just like computers, medical ultrasound imagers have been getting smaller and smaller. One of the biggest challenges is connecting the ultrasound transducer at the tip of the probe to the extensive computer chip-based signal processing and imaging electronics. NIBIB funding was important in demonstrating this level of extreme miniaturization—in effect, a “system inside the probe.”

This “system inside a probe” imaging paradigm was subsequently extended into the GE Vscan device. The Vscan is a palm-size ultrasound scanner, which has both anatomical imaging and color Doppler capability. The device is currently in clinical use and costs considerably less than a full-sized ultrasound scanner.  Its small size and low cost, as well as range of applications, allow it to be used in ambulances, emergency rooms, field hospitals, or other remote locations. It is currently being used in more than 60 countries around the world. (Vscan image on right courtesy of Kai Thomenius, Ph.D., GE).

Histotripsy technique for dissolving blood clots. Researchers at the University of Michigan are investigating the clot-dissolving capabilities of a high intensity ultrasound technique, called histotripsy, for the non-invasive treatment of deep-vein thrombosis (DVT). This technique uses short, high-intensity pulses of ultrasound to cause clot breakdown. The researchers have successfully demonstrated the effectiveness of this technique in pigs and its possible use in humans. They are currently working on new methods to avoid inadvertent vessel damage during clot treatment, and to provide real-time imaging feedback to monitor the treatment. This research could have a significant impact, since current conventional treatments for DVT involve drug therapy and sometimes invasive removal of the clots, which requires a several-day hospital stay, and may result in complications after treatment. In contrast, the non-invasive histotripsy technique is 50 times faster than the current technique, does not require drugs or external agents, and if successful, could be used as an outpatient procedure.

Join WikiMD as a freelancer or paid editor and help improve the page Ultrasound or others.
Other languages:
English
Retrieved from "http://www.wikimd.org/wiki/index.php?title=Ultrasound&oldid=1281390"