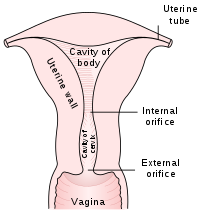 The uterus or womb is part of the reproductive system of the female body. The uterus is the place a baby grows for nine months during pregnancy. It is a pear-shaped organ inside a woman. It is behind the bladder and in front of the rectum. The uterus weighs 70 grams.[1] The endometrium is the tissue that lines the uterus. A hormone called estrogen makes the endometrium thick with blood and fluid. This uterine lining gives the growing baby what it needs to grow.[2] The endometrium leaves the uterus as the monthly flow of blood (menstruation). The endometrium will form again. This happens every 28 days. The number of days can be different for each women. The fertilized egg will move through the fallopian tube and into uterus. It will then attach to the endometrium.

The uterus is part the female reproductive system. Other structures and organs that are part of the reproduction system are the vagina, ovaries and fallopian tubes.[3]

The uterus is held in place by ligaments. These are the anterior, posterior, lateral, uterosacral, and round ligaments. The position of the uterus can vary depending on the contents of the bladder.[4]

The uterus grows during pregnancy

The uterus changes during pregnancy. It grows with the baby. It also has fluid and the placenta inside. It starts small but it becomes very large.[16] It can hold as much as five to twenty liters. The uterus is made of smooth muscle called the myometrium. The cells of the myometrium grow during pregnancy. Strong fibrous tissue grows on the outside of the uterus. The myometrium grows at first but becomes thinner at the end of the pregnancy. A doctor or nurse can feel the baby through the thinning uterus.[1]

The uterus can move down and be seen through the vagina. This can happen after a woman has a baby. Older women have this problem more than younger women. Other things that make women have their uterus drop down:[17]

A uterus is present when an animal gives birth to live offspring. Therefore, all mammals have a uterus except monotremes. However, humans are almost alone in having a single uterus. The other mammal which has a single uterus is the chimpanzee, our nearest living relative. Other mammals have either wholly separated uteri or uteri which are fused along part of their length.

Animals which lay eggs have an oviduct, and there are quite a few reptiles which are viviparous or ovoviviparous.