Vein is a blood vessel that carries blood toward the heart.

Venous system in a nut shell

After blood delivers oxygen to the tissues and picks up carbon dioxide, it returns to the heart through a system of veins. The capillaries, where the gaseous exchange occurs, merge into venules and these converge to form larger and larger veins until the blood reaches either the superior vena cava or inferior vena cava, which drain into the right atrium.

Major veins of the body

Varicose veins and spider veins are swollen, twisted veins that usually appear on the legs. 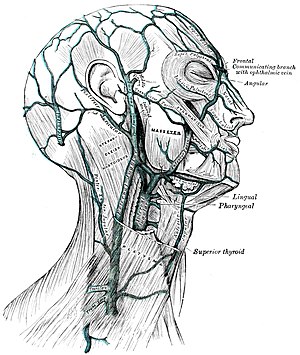 Join WikiMD as a freelancer or paid editor and help improve the page Vein or others.
Retrieved from "http://www.wikimd.org/wiki/index.php?title=Vein&oldid=2163080"
Category: