Before vivisection, chloroform was given to this sand frog so that it would not feel pain. 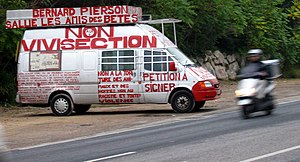 Vivisection (from Latin vivus ("alive") + sectio ("cutting")) is a doing a surgery as an experiment on a living organism, usually animals. It is sometimes used to mean animal testing itself (see animal testing).[1][2][3] The word is often used by people or organizations who dislike animal experimentation[4]

Quick links: Medicine Portal | Encyclopedia‏‎‏‎ | Gray's Anatomy‏‎ | Topics‏‎ |‏‎ Diseases‏‎ | Drugs | Wellness | Obesity‏‎ | Metabolic syndrome | Weight loss*
Disclaimer: The entire contents of WIKIMD.ORG are for informational purposes only and do not render medical advice or professional services. If you have a medical emergency, you should CALL 911 immediately! Given the nature of the wiki, the information provided may not be accurate, misleading and or incorrect. Use the information on this wiki at your own risk! See full Disclaimer.
Link to this page: <a href="http://www.wikimd.org/wiki/Vivisection">Vivisection</a>