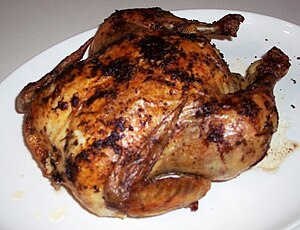 In a more general sense, white meat may also refer to any lighter-colored meat, as contrasted with red meats like beef and some types of game.

White meat is made up of muscles with fibres that are called fast-twitch. Fast-twitch muscles are used for quick bursts of activity, such as fleeing from danger. These muscles get energy from glycogen, which is also stored in the muscles. [1]

Red, or dark meat is made up of muscles with fibres that are called slow-twitch. These muscles are used for extended periods of activity, such as standing or walking, and need a consistent energy source. The protein myoglobin stores oxygen in muscle cells, which use oxygen to extract the energy needed for constant activity. Myoglobin is a richly pigmented protein. The more myoglobin there is in the cells, the redder, or darker, the meat.[1]

Given nutritional concerns, meat producers are eager to have their products considered as "white", and the United States National Pork Board has positioned their product as "Pork. The Other White Meat", alongside poultry and fish; however, meats which are red when raw and turn white on cooking, like pork, are categorized by the United States Department of Agriculture as red meats.[2] This categorization is controversial as some types of fish, such as tuna, are red when raw and turn white when cooked; similarly, certain types of poultry that are sometimes grouped as "white meat" are actually "red" when raw, such as duck and goose. The debate is mainly one of semantics as nutritionists consider all meat from mammals to be "red meat" while this is not the case in other fields such as husbandry, biology, genetics, physiology, etc.[citation needed]

In Israel, where Jewish dietary laws are popularly practiced, forbidding the consumption of pork, "white meat" is the accepted euphemism for pork.[3]

Within poultry, there are two types of meats—white and dark. The different colors are based on the different locations and uses of the muscles. Dark meats occur in the legs, which are used to support the weight of the animals while they move. These muscles are designed to develop endurance for long-term use and contain a large amount of myoglobin, allowing the muscle to use oxygen more efficiently for aerobic respiration. In contrast the white meat, generally found within the breasts of the birds, are used for quick bursts of power which requires little of the meat-darkening myoglobin. Note that this holds for ground-based birds like chicken and turkeys – birds which use their chest muscles for sustained flight (such as geese and ducks) have dark meat throughout their bodies.[4] Dark meat contains 2.64 times more saturated fat than white meat, per gram of protein.[5] One commentator has pointed out that dark meat contains more vitamins,[6] while another has stated the two meats are nearly identical in nutritional value.[7]

Quick links: Medicine Portal | Encyclopedia‏‎‏‎ | Gray's Anatomy‏‎ | Topics‏‎ |‏‎ Diseases‏‎ | Drugs | Wellness | Obesity‏‎ | Metabolic syndrome | Weight loss*
Disclaimer: The entire contents of WIKIMD.ORG are for informational purposes only and do not render medical advice or professional services. If you have a medical emergency, you should CALL 911 immediately! Given the nature of the wiki, the information provided may not be accurate, misleading and or incorrect. Use the information on this wiki at your own risk! See full Disclaimer.
Link to this page: <a href="http://www.wikimd.org/wiki/White_meat">White meat</a>