X-linked ichthyosis (abbreviated XLI) is a skin condition caused by the hereditary deficiency of the steroid sulfatase (STS) enzyme that affects 1 in 2000 to 1 in 6000 males.[1] XLI manifests with dry, scaly skin[2] and is due to deletions[3][4] or mutations[5] in the STS gene. XLI can also occur in the context of larger deletions causing contiguous gene syndromes.[3] Treatment is largely aimed at alleviating the skin symptoms.[6] The term is from the Ancient Greek 'ichthys' meaning 'fish'.

The major symptoms of XLI include scaling of the skin, particularly on the neck, trunk, and lower extremities. The extensor surfaces are typically the most severely affected areas. The >4 mm diameter scales adhere to the underlying skin and can be dark brown or gray in color. Symptoms may subside during the summer.[1]

Aside from the skin scaling, XLI is not typically associated with other major medical problems.[7] Corneal opacities may be present but do not affect vision. Cryptorchidism is reported in some individuals.[1] Some individuals can also be seen to have an intellectual disability, this is thought to be due to deletions encompassing neighboring genes in addition to STS.[8]

Female carriers generally do not experience any of these problems but rarely can have difficulty during childbirth, as the STS expressed in the placenta plays a role in normal labor.[9] For this reason carriers should ensure their obstetrician is aware of the condition. 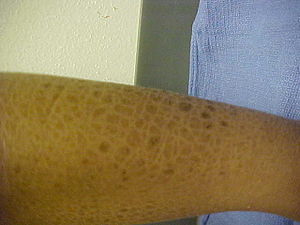 For this reason, XLI most commonly affects males, although individuals with numeric abnormalities of the sex chromosomes (45,X and 47,XXY) who also carry STS deletions or mutations would be exceptions to this rule.

In addition, a female could be affected if she were the offspring of an affected male and a carrier female and inherited a deletion or mutation of the STS gene on both X chromosomes.

Since the majority of cases appear to occur through transmission of an STS deletion from a carrier mother,[11] enzyme testing or DNA testing should be performed in the mother of any newly diagnosed simplex case (i.e. the first case in a family). In the case of an extended family with many affected individuals, carrier status can often be assigned based on pedigree analysis.

Due to random segregation of the chromosomes during gametogenesis, each pregnancy will be subject to the same probabilities, regardless of the number of previously affected or unaffected offspring. The above recurrence risks are based on the assumption that an affected male or carrier female will have children with an unaffected or non-carrier individual. The risks of having affected offspring would clearly increase in the case of a union between a male with XLI and a carrier female. 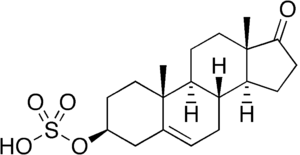 The STS enzyme (EC 3.1.6.2), also referred to as Arylsulfatase C, is expressed throughout the body, with highest expression in the skin, liver, lymph nodes, and placenta, and lower expression in breast tissue and brain[13] STS catalyzes the hydrolysis of sulfated steroids, such as estrone sulfate and dehydroepiandrosterone sulfate (DHEAS), to non-sulfated steroids estradiol and androstenediol, respectively.[14] Prenatally, the enzyme is involved in placental estrogen production.[15] The enzyme is also involved in adrenal steroid production as well as conversion of sulfated steroids in other tissues.

There seems to be a particularly important role for the enzyme in skin. Deficiency of the enzyme leads to the characteristic dry and scaly skin seen in ichthyosis. Recent research indicates that the skin abnormalities seen in XLI may be due to accumulation of cholesterol sulfate in the outer epidermis, leading to abnormal barrier function and corneocyte retention.[16]

XLI can be suspected based on clinical findings, although symptoms can take varying amounts of time to become evident, from a few hours after birth, up to a year in milder cases. The diagnosis is usually made by a dermatologist, who also typically formulates the treatment plan (see below). STS enzyme deficiency is confirmed using a clinically available biochemical assay. Carrier detection can be performed in mothers of affected sons using this test (see Genetics, below).[12] Molecular testing for DNA deletions or mutations is also offered, and can be particularly useful in the evaluation of individuals with associated medical conditions (see below). Prenatal diagnosis is possible using either biochemical or molecular tests. However, the use of prenatal diagnosis for genetic conditions that are considered to be generally benign raises serious ethical considerations and requires detailed genetic counseling.

Because XLI is caused by a gene mutation or deletion, there is no "cure." One of the aims of treatment is to reduce scaling by removing the excess, flaky scales, and keep the skin hydrated. This can be achieved using a variety of topical creams.[1][6]

Research is ongoing with regard to the use of gene therapy to treat XLI.[18]

Quick links: Medicine Portal | Encyclopedia‏‎‏‎ | Gray's Anatomy‏‎ | Topics‏‎ |‏‎ Diseases‏‎ | Drugs | Wellness | Obesity‏‎ | Metabolic syndrome | Weight loss*
Disclaimer: The entire contents of WIKIMD.ORG are for informational purposes only and do not render medical advice or professional services. If you have a medical emergency, you should CALL 911 immediately! Given the nature of the wiki, the information provided may not be accurate, misleading and or incorrect. Use the information on this wiki at your own risk! See full Disclaimer.
Link to this page: <a href="http://www.wikimd.org/wiki/X-linked_ichthyosis">X-linked ichthyosis</a>