Zinc is a mineral that is essential for many of the body's normal functions and systems, including the immune system, wound healing, blood clotting, thyroid function, and the senses of taste and smell. Zinc also supports normal growth and development during pregnancy, childhood and adolescence.

Foods rich in zinc include red meat, poultry, beans, nuts and seafood. Most people do not need zinc supplements and get enough zinc from food.

Zinc is an essential mineral and heavy metal that is included in most over-the-counter multivitamin and mineral supplements, and is used therapeutically in higher doses because of its ability to block copper absorption as maintenance therapy of Wilson disease. 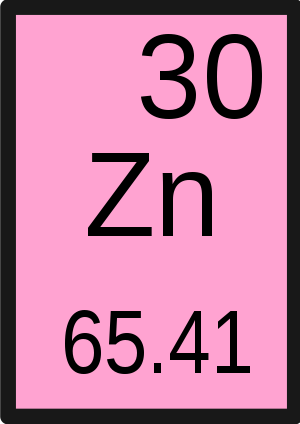 Zinc has not been associated with worsening of serum enzyme elevations during therapy or with clinically apparent liver injury.

Mechanism of action of Zinc

Zinc is an essential trace element that is found in many human enzymes and transcription factors.  The recommended dietary allowance is 8 mg per day for women and 11 mg for men.  Zinc is widely present in foods, and the typical Western diet has adequate concentrations, the highest levels being found in shellfish and red meats.  Zinc deficiency is usually due to malnutrition and reduced dietary intake, but can also occur with strict vegetarian diets.  Zinc deficiency is not uncommon in developing countries, but severe deficiencies are rare.  Zinc deficiency can be accompanied by growth retardation, infertility, dysgeusia, diarrhea, dermatitis, glossitis, behavioral changes, depression and mental clouding.

The recommended daily allowance of zinc is 15 mg per day in men and 12 mg in women, with higher levvels recommended for pregnant or lactating women. High doses of oral zinc interfere with the absorption of copper and iron, and supplementation above the RDA can cause copper deficiency.

Clinical use of Zinc

Because of its effects on copper balance, zinc has been used to treat Wilson disease, particularly as maintenance therapy once copper levels have been reduced with chelating agents.  Wilson disease is a caused by inherited mutation in the ATPase7B gene, which encodes a hepatic enzyme responsible for the transmembrane transport and excretion of copper.  The metabolic defect leads to accumulation of free copper in liver and blood and secondarily in other organs, particularly brain and kidney.  The disease usually presents in childhood or adolescence with neurologic syndromes, signs of advanced liver disease and hemolytic anemia.  Zinc is a unique approach to the treatment of Wilson disease in that it interferes with dietary absorption (probably by increasing intestinal metallothionein), rather than decreasing tissue levels by chelation.  Zinc acetate is approved for use in the United States as maintenance therapy of Wilson disease and is available in capsules of 25 and 50 mg under the brand name Galzin.  Other zinc formulations have been used to treat Wilson disease, including zinc sulfate and zinc gluconate (Gluzin), but these have not been formally approved for this indication.  The recommended dose is 25 to 50 mg two to three times daily.  Zinc when given only one daily has little or no effect on copper balance, and is not recommended.  Zinc is generally well tolerated, but when given in high doses up to 10% of patients initially have abdominal pains or gastrointestinal intolerance which can require dose adjustment or discontinuation.  Long term therapy can potentially lead to copper deficiency.

Zinc overdose has been described and is usually due to ingestion of coins, metallic objects or zinc soldering solutions and rarely to suicidal overdose.  Symptoms include rapid onset of epigastric pain, nausea and vomiting and diarrhea, followed by lethargy, dizziness, ataxia, confusion and coma.  With high doses, patients develop hypotension, metabolic acidosis and hemolytic anemia that can be severe and life-threatening.  Liver injury is generally mild and arises after a day or two.  Nevertheless, cases with jaundice, cholestasis and hepatic failure have been described.  Therapy of acute zinc overdose generally rests upon hydration, gastric lavage or whole bowel irrigation, correction of metabolic acidosis and anemia and zinc chelation with dimercaprol or EDTA infusions.

This WikiMD article Zinc is a stub.
If you are a healthcare professional familiar with the topic Zinc, or
A subject matter expert or authority on Zinc, you can help us.
About | Mission | Paid editors welcome!