Rye is a type of grass, usually grown as a grain or forage crop (meaning that it is fed to animals). It is a member of the wheat family of plants and is similar to wheat and barley. It is used to make flour, food for animals, and many types of alcoholic drinks.

Rye has not always been a plant humans can use. It was originally a wild plant. There are several wild plants in Turkey that are similar to rye. 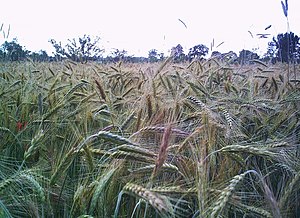 Rye in a field.

Since the Middle Ages, rye has been used widely in Central and Eastern Europe. In these parts of the world, it is still one of the main ingredients in making bread. However, the number of people and businesses using rye is becoming lower. Rye is usually sold to buyers near to where it is grown.

Rye can be planted to feed animals or can be harvested for hay (dry grass). Rye is a strong plant that can survive in soil with a high or low pH. This means it can survive even if the soil is very acidic or alkaline. Other plants may struggle to survive in these pH levels.

Quick links: Medicine Portal | Encyclopedia‏‎‏‎ | Gray's Anatomy‏‎ | Topics‏‎ |‏‎ Diseases‏‎ | Drugs | Wellness | Obesity‏‎ | Metabolic syndrome | Weight loss*
Disclaimer: The entire contents of WIKIMD.ORG are for informational purposes only and do not render medical advice or professional services. If you have a medical emergency, you should CALL 911 immediately! Given the nature of the wiki, the information provided may not be accurate, misleading and or incorrect. Use the information on this wiki at your own risk! See full Disclaimer.
Link to this page: <a href="http://www.wikimd.org/wiki/Rye">Rye</a>