Difference between revisions of "The Ovum"

Human ova are extremely minute, measuring about 0.2 mm. in diameter, and are enclosed within the egg follicles of the ovaries; as a rule each follicle contains a single ovum, but sometimes two or more are present.  By the enlargement and subsequent rupture of a follicle at the surface of the ovary, an ovum is liberated and conveyed by the uterine tube to the cavity of the uterus.

Unless it be fertilized it undergoes no further development and is discharged from the uterus, but if fertilization take place it is retained within the uterus and is developed into a new being.  In appearance and structure the ovum (Fig. 3) differs little from an ordinary cell, but distinctive names have been applied to its several parts; thus, the cell substance is known as the yolk or ooplasm, the nucleus as the germinal vesicle, and the nucleolus as the germinal spot.

The ovum is enclosed within a thick, transparent envelope, the zona striata or zona pellucida, adhering to the outer surface of which are several layers of cells, derived from those of the follicle and collectively constituting the corona radiata. 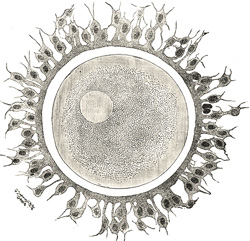 FIG. 3– Human ovum examined fresh in the liquor folliculi. (Waldeyer.) The zona pellucida is seen as a thick clear girdle surrounded by the cells of the corona radiata. The egg itself shows a central granular deutoplasmic area and a peripheral clear layer, and encloses the germinal vesicle, in which is seen the germinal spot. (See enlarged image)

The yolk comprises (1) the cytoplasm of the ordinary animal cell with its spongioplasm and hyaloplasm; this is frequently termed the formative yolk; (2) the nutritive yolk or deutoplasm, which consists of numerous rounded granules of fatty and albuminoid substances imbedded in the cytoplasm.

In the mammalian ovum the nutritive yolk is extremely small in amount, and is of service in nourishing the embryo in the early stages of its development only, whereas in the egg of the bird there is sufficient to supply the chick with nutriment throughout the whole period of incubation.

The nutritive yolk not only varies in amount, but in its mode of distribution within the egg; thus, in some animals it is almost uniformly distributed throughout the cytoplasm; in some it is centrally placed and is surrounded by the cytoplasm; in others it is accumulated at the lower pole of the ovum, while the cytoplasm occupies the upper pole. A centrosome and centriole are present and lie in the immediate neighborhood of the nucleus.

The germinal vesicle or nucleus is a large spherical body which at first occupies a nearly central position, but becomes eccentric as the growth of the ovum proceeds.

Its structure is that of an ordinary cell-nucleus, viz., it consists of a reticulum or karyomitome, the meshes of which are filled with karyoplasm, while connected with, or imbedded in, the reticulum are a number of chromatin masses or chromosomes, which may present the appearance of a skein or may assume the form of rods or loops.

The nucleus is enclosed by a delicate nuclear membrane, and contains in its interior a well-defined nucleolus or germinal spot.

Coverings of the Ovum

The zona striata or zona pellucida (Fig. 3) is a thick membrane, which, under the higher powers of the microscope, is seen to be radially striated.

It persists for some time after fertilization has occurred, and may serve for protection during the earlier stages of segmentation. It is not yet determined whether the zona striata is a product of the cytoplasm of the ovum or of the cells of the corona radiata, or both'.

The corona radiata (Fig. 3) consists or two or three strata of cells; they are derived from the cells of the follicle, and adhere to the outer surface of the zona striata when the ovum is set free from the follicle; the cells are radially arranged around the zona, those of the innermost layer being columnar in shape. The cells of the corona radiata soon disappear; in some animals they secrete, or are replaced by, a layer of adhesive protein, which may assist in protecting and nourishing the ovum.

The phenomena attending the discharge of the ova from the follicles belong more to the ordinary functions of the ovary than to the general subject of embryology, and are therefore described with the anatomy of the ovaries.

Maturation of the Ovum

Before an ovum can be fertilized it must undergo a process of maturation or ripening. This takes place previous to or immediately after its escape from the follicle, and consists essentially of an unequal subdivision of the ovum (Fig. 4) first into two and then into four cells. Three of the four cells are small, incapable of further development, and are termed polar bodies or polocytes, while the fourth is large, and constitutes the mature ovum.

The process of maturation has not been observed in the human ovum, but has been carefully studied in the ova of some of the lower animals, to which the following description applies.  It was pointed out on page 37 that the number of chromosomes found in the nucleus is constant for all the cells in an animal of any given species, and that in man the number is probably twenty-four.

This applies not only to the somatic cells but to the primitive ova and their descendants. For the purpose of illustrating the process of maturation a species may be taken in which the number of nuclear chromosomes is four (Fig. 5). If an ovum from such be observed at the beginning of the maturation process it will be seen that the number of its chromosomes is apparently reduced to two. In reality, however, the number is doubled, since each chromosome consists of four granules grouped to form a tetrad.

During the metaphase (see page 37) each tetrad divides into two dyads, which are equally distributed between the nuclei of the two cells formed by the first division of the ovum. One of the cells is almost as large as the original ovum, and is named the secondary oocyte; the other is small, and is termed the first polar body. The secondary oocyte now undergoes subdivision, during which each dyad divides and contributes a single chromosome to the nucleus of each of the two resulting cells. 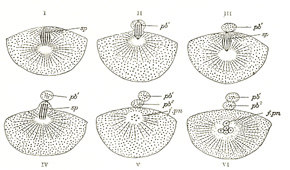 FIG. 4– Formation of polar bodies in Asterias glacialis. (Slightly modified from Hertwig.) In I the polar spindle (sp) has advanced to the surface of the egg. In II a small elevation (pb1) is formed which receives half of the spindle. In III the elevation is constricted off, forming the first polar body (pb1), and a second spindle is formed. In IV is seen a second elevation which in V has been constricted off as the second polar body (pb2). Out of the remainder of the spindle (f.pn in VI) the female pronucleus is developed. (See enlarged image)

FIG. 5– Diagram showing the reduction in number of the chromosomes in the process of maturation of the ovum. (See enlarged image)

This second division is also unequal, producing a large cell which constitutes the mature ovum, and a small cell, the second polar body. The first polar body frequently divides while the second is being formed, and as a final result four cells are produced, viz., the mature ovum and three polar bodies, each of which contains two chromosomes, i.e., one-half the number present in the nuclei of the somatic cells of members of the same species. The nucleus of the mature ovum is termed the female pronucleus.