Difference between revisions of "The Yolk-sac"

The yolk-sac (Figs. 22 and 23) is situated on the ventral aspect of the embryo; it is lined by entoderm, outside of which is a layer of mesoderm. It is filled with fluid, the vitelline fluid which possibly may be utilized for the nourishment of the embryo during the earlier stages of its existence.

Blood is conveyed to the wall of the sac by the primitive aorta, and after circulating through a wide-meshed capillary plexus, is returned by the vitelline veins to the tubular heart of the embryo.

This constitutes the vitelline circulation and by means of it nutritive material is absorbed from the yolk-sac and conveyed to the embryo. At the end of the fourth week the yolk-sac presents the appearance of a small pear-shaped vesicle (umbilical vesicle) opening into the digestive tube by a long narrow tube, the vitelline duct .

The vesicle can be seen in the after-birth as a small, somewhat oval-shaped body whose diameter varies from 1 mm. to 5 mm, it is situated between the amnion and the chorion and may lie on or at a varying distance from the placenta.

As a rule the duct undergoes complete obliteration during the seventh week, but in about three per cent. of cases its proximal part persists as a diverticulum from the small intestine, Meckel’s diverticulum which is situated about three or four feet above the ileocolic junction, and may be attached by a fibrous cord to the abdominal wall at the umbilicus.

Sometimes a narrowing of the lumen of the ileum is seen opposite the site of attachment of the duct.

FIG. 23– Human embryo from thirty-one to thirty-four days. (His.)

Recently, it has been discovered that the blood within the umbilical cord, known as cord blood, is a rich and readily available source of primitive,Cellular differentiation|undifferentiated stem cells (i.e. CD34+ and CD38-). These cord blood cells can be used for bone marrow transplant. 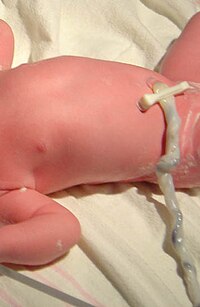 Some parents have opted to have this blood harvested upon the baby's birth, and frozen for long-term storage at a cord blood bank should the child ever require the cord blood stem cells (for example, to replace bone marrow destroyed when treating leukemia). This practice is somewhat controversial.