From WikiMD's free health, diet & wellness encyclopedia
(Redirected from AC joint)
Jump to navigation Jump to search
Share
This page contains changes which are not marked for translation.

A shoulder joint that connects the clavicle to the scapula. 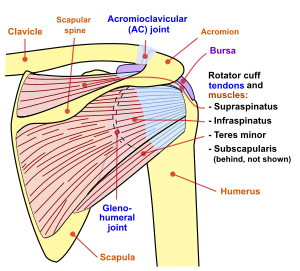 Acromioclavicular joint is located between the acromion and clavicle

This is a gliding type of joint.

The ligaments that serve to support and strengthen this joint are called the capsular;

The Synovial Membrane There is usually only one synovial membrane in this articulation, but when a complete articular disk is present, there are two. 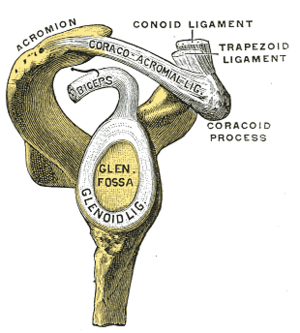 Glenoid fossa of right side.

The movements of this articulation are of two kinds:

The acromioclavicular joint has important functions in the movements of the upper extremity.

^Acromioclavicular joint (article) is provided for informational purposes only. No expressed or implied warranties as to the validity of content.
WikiMD is not a substitute for professional advice. By accessing and using WikiMD you agree to the terms of use.
Templates etc. when imported from Wikipedia, are licensed under CC BY-SA 3.0. See full disclaimers.
Retrieved from "http://www.wikimd.org/wiki/index.php?title=Acromioclavicular_joint&oldid=2152531"
Categories: