General anesthesia is defined as a controlled state of unconsciousness accompanied by a loss of protective reflexes, including the ability to maintain an airway independently and respond purposefully to physical stimulation or verbal command. 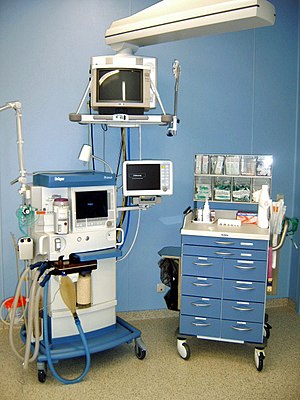 Equipment used for anaesthesia in the operating theatre.

Properties of an ideal anesthetic

General anesthetics cause an irregularly descendingvdepression of CNS, i.e. the higher functions are lost first and progressively lower areas of the brain are involved. Guedel (1920) described four stages with ether anesthesia but the precise sequence of events differs among each anesthetic.

Starts from beginning of anesthetic inhalation and lasts up to the loss of consciousness. Pain is progressively abolished during this stage. Patient remains conscious, can hear and see, and feels a dream like state. Reflexes and respiration remain normal. Though some minor and even major operations can be carried out during this stage, it is rather difficult to maintain so its use is limited to short procedures only.

From loss of consciousness to beginning of regular respiration. Apparent excitement is seen in many patients and he may shout, struggle and hold his breath; muscle tone increase, jaws are tightly closed, breathing is jerky; vomiting, involuntary micturition or defecation may occur. Heart rate and blood pressure may rise and pupil dilates due to sympathetic stimulation. No stimulus should be applied or operative procedure carried out during this stage. This stage can be cut short by rapid induction and appropriate premedication. It is inconspicuous in modern anesthesia.

Extends from onset of regular respiration to cessation of spontaneous breathing. This has been divided into four planes, which may be distinguished as:

Includes the stage from cessation of breathing to failure of circulation and death. Pupil is widely dilated, muscles are totally flabby, pulse is imperceptible and blood pressure is very low.

often recall the events during anesthesia, but some lose awareness completely.

^General anesthesia (article) is provided for informational purposes only. No expressed or implied warranties as to the validity of content.
WikiMD is not a substitute for professional advice. By accessing and using WikiMD you agree to the terms of use.
Templates etc. when imported from Wikipedia, are licensed under CC BY-SA 3.0. See full disclaimers.
Retrieved from "http://www.wikimd.org/wiki/index.php?title=General_anesthesia&oldid=2199928"