From WikiMD's free health, diet & wellness encyclopedia
Jump to navigation Jump to search
Share
This page contains changes which are not marked for translation.
Other languages:
English 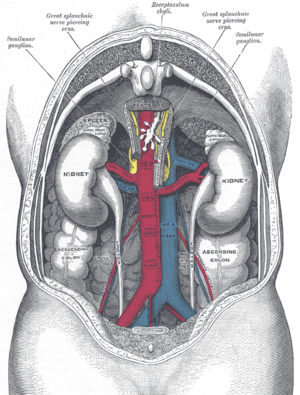 The relations of the viscera and large vessels of the abdomen, seen from behind.

The abdomen contains most of the tubelike organs of the digestive tract, as well as several solid organs. Hollow abdominal organs include the stomach, the small intestine, and the colon with its attached appendix. Organs such as the liver, its attached gallbladder, and the pancreas function in close association with the digestive tract and communicate with it via ducts. The spleen, kidneys, and adrenal glands also lie within the abdomen, along with many blood vessels including the aorta and inferior vena cava. Anatomists may consider the urinary bladder, uterus, fallopian tubes, and ovaries as either abdominal organs or as pelvic organs. Finally, the abdomen contains an extensive membrane called the peritoneum. A fold of peritoneum may completely cover certain organs, whereas it may cover only one side of organs that usually lie closer to the abdominal wall. Anatomists call the latter type of organs retroperitoneal.

Abdominal organs can be highly specialized in some animals. For example the stomach of ruminants (a suborder of mammals) is divided into four chambers - rumen, reticulum, omasum and abomasum.[3] In vertebrates, the abdomen is a large cavity enclosed by the abdominal muscles, ventrally and laterally, and by the vertebral column dorsally. Lower ribs can also enclose ventral and lateral walls. The abdominal cavity is upper part of the pelvic cavity. It is attached to the thoracic cavity by the diaphragm. Structures such as the aorta, superior vena cava and esophagus pass through the diaphragm. Both the abdominal and pelvic cavities are lined by a serous membrane known as the parietal peritoneum. This membrane is continuous with the visceral peritoneum lining the organs.[4] The abdomen in vertebrates contains a number of organs belonging, for instance, to the digestive tract and urinary system. 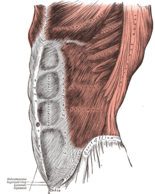 Henry Gray (1825–1861). Anatomy of the Human Body with a modern example of a human male abdomen below

There are three layers of the abdominal wall. They are, from the outside to the inside: external oblique, internal oblique, and transverse abdominus. The first three layers extend between the vertebral column, the lower ribs, the iliac crest and pubis of the hip. All of their fibers merge towards the midline and surround the rectus abdominus in a sheath before joining up on the opposite side at the linea alba. Strength is gained by the criss-crossing of fibers, such that the external oblique are downward and forward, the internal oblique upward and forward, and the transverse abdominus horizontally forward.[5]

The transversus abdominis muscle is flat and triangular, with its fibers running horizontally. It lies between the inner oblique and the underlying transversalis fascia. It originates from Poupart's ligament, the inner lip of the ilium, the lumbar fascia and the inner surface of the cartilages of the six lower ribs. It inserts into the linea alba behind the rectus abdominis.

The rectus abdominis muscles are long and flat. The muscle is crossed by three tendinous intersections called the linae transversae. The rectus abdominis is enclosed in a thick sheath formed, as described above, by fibers from each of the three muscles of the lateral abdominal wall. They originate at the pubis bone, run up the abdomen on either side of the linea alba, and insert into the cartilages of the fifth, sixth, and seventh ribs. In the region of the groin, the inguinal canal, a passage through the layers. This gap is where the testes can drop through the wall and where the fibrous cord from the uterus in the female runs. This is also where weakness can form, and inguinal hernias.[5]

The pyramidalis muscle is small and triangular. It is located in the lower abdomen in front of the rectus abdominis. It originates at the pubic bone and is inserted into the linea alba halfway up to the umbilicus.

Functionally, the human abdomen is where most of the alimentary tract is placed and so most of the absorption and digestion of food occurs here. The alimentary tract in the abdomen consists of the lower esophagus, the stomach, the duodenum, the jejunum, ileum, the cecum and the appendix, the ascending, transverse and descending colons, the sigmoid colon and the rectum. Other vital organs inside the abdomen include the liver, the kidneys, the pancreas and the spleen.

The abdominal wall is split into the posterior (back), lateral (sides), and anterior (front) walls.

Movement, breathing and other functions

The abdominal muscles have different important functions. They assist in the breathing process. Moreover, these muscles serve as protection for the inner organs. Furthermore, together with the back muscles they provide postural support and are important in defining the form. When the glottis is closed and the thorax and pelvis are fixed, they are integral in the cough, urination, defecation, childbirth, vomit, and singing functions.[5] When the pelvis is fixed, they can initiate the movement of the trunk in a forward motion. They also prevent hyperextension. When the thorax is fixed, they can pull up the pelvis and finally, they can bend the vertebral column sideways and assist in the trunks rotation.[5]

The transverse abdominus muscle is the deepest muscle, therefore, it cannot be touched from the outside. It can greatly affect the body posture. The internal obliques are also deep and also affect body posture. Both of them are involved in rotation and lateral flexion of the spine and are used to bend and support the spine from the front. The external obliques are more superficial and they are also involved in rotation and lateral flexion of the spine. Also they stabilize the spine when upright. The rectus abdominus muscle is not the most superficial abdominal muscle. The tendonous sheath extending from the external obliques cover the rectus abdominus. The Rectus abdominus is the muscle that very fit people develop into the 6-pack ab look. Although, it should really be an 10 pack as there are 5 vertical sections on each side. The 2 bottom sections are just above the pubic bone and usually not visible, hence, the 6 pack abs. The rectus abdominals' function is to bend one's back forward (flexion). The main work of the abdominal muscles is to bend the spine forward when contracting coencentrically.[6]

Being a key element to support the spine and contribute to a good posture, it is important to properly exercise the abdominal muscles together with the back muscles as when weak or overly tight they can suffer painful spasms as well as injuries. When properly exercised, these muscles contribute to improve posture and balance, reduce the likelihood of back pain episodes, reduce the severity of back pain, protect against injury by responding efficiently to stresses, help avoid some back surgeries, and help healing from a back problem or after spine surgery. Also, when strengthened, the abdominal muscles provide flexibility as well.

The abdominal muscles can be worked out by practicing disciplines of general body strength such as Pilates, yoga, T'ai chi, and jogging among others. There are also specific routines to target each of these muscles.

A scaphoid abdomen is when the abdomen is sucked inwards. In a newborn, it may represent a diaphragmatic hernia.[7] In general, it is indicative of malnutrition.[8] 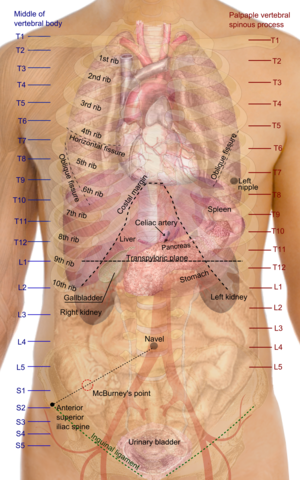 Surface projections of the organs of the trunk, from which organ locations are derived mainly from vertebra levels, ribs and the ilium.

In the mid-line a slight furrow extends from the ensiform cartilage/xiphoid process above to the pubic symphysis below, representing the linea alba in the abdominal wall. At about its midpoint sits the umbilicus or navel. On each side of it the broad recti muscles stand out in muscular people. The outline of these muscles is interrupted by three or more transverse depressions indicating the lineae transversae. There is usually one about the ensiform cartilage, one at the umbilicus, and one between. It is the combination of the linea alba and the linea transversae which form the abdominal "six-pack" sought after by many people.

The upper lateral limit of the abdomen is the subcostal margin (at or near the subcostal plane) formed by the cartilages of the false ribs (8, 9, 10) joining one another. The lower lateral limit is the anterior crest of the ilium and Poupart's ligament, which runs from the anterior superior spine of the ilium to the spine of the pubis. These lower limits are marked by visible grooves. Just above the pubic spines on either side are the external abdominal rings, which are openings in the muscular wall of the abdomen through which the spermatic cord emerges in the male, and through which an inguinal hernia may rupture.

One method by which the location of the abdominal contents can be appreciated is to draw three horizontal and two vertical lines.

Front of abdomen, showing markings for duodenum, pancreas, and kidneys.

The two vertical or mid-Poupart lines are drawn from the point midway between the anterior superior spine and the pubic symphysis on each side, vertically upward to the costal margin.

The right subcostal margin corresponds to the lower limit of the liver, while the right nipple is about half an inch above the upper limit of this viscus. 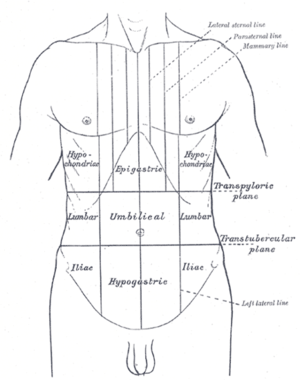 Surface lines of the front of the thorax and abdomen.

These three horizontal and two vertical lines divide the abdomen into nine "regions." (Note that "hypo" means "below" and "epi" means "above", while "chond" means "cartilage" (in this case, the cartilage of the rib) and "gast" means stomach. The reversal of "left" and "right" is intentional, because the anatomical designations reflect the position on the patient.)

Another way of dividing the abdomen is by using 4 quadrants: 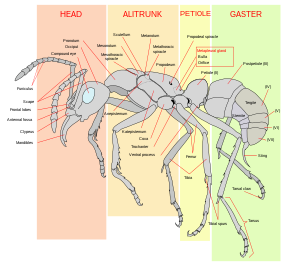 In the worker ant, the abdomen consists of the propodeum fused to the thorax and the metasoma, itself divided into the narrow petiole and bulbous gaster.

The abdomen contains the insect's digestive tract and reproductive organs, it consists of eleven segments in most orders of insects though the eleventh segment is absent in the adult of most higher orders. The number of these segments does vary from species to species with the number of segments visible reduced to only seven in the common honeybee. In the Collembola (Springtails) the abdomen has only six segments.

The abdomen is sometimes highly modified. In Apocrita (bees, ants and wasps), the first segment of the abdomen is fused to the thorax and is called the propodeum. In ants the second segment forms the narrow petiole. Some ants have an additional postpetiole segment, and the remaining segments form the bulbous gaster. The petiole and gaster (abdominal segments 2 and onward) are collectively called the metasoma.

Unlike other Arthropods, insects possess no legs on the abdomen in adult form, though the Protura do have rudimentary leg-like appendages on the first three abdominal segments, and Archaeognatha possess small, articulated "styli" which are sometimes considered to be rudimentary appendages. Many larval insects including the Lepidoptera and the Symphyta (Sawflies) have fleshy appendages called prolegs on their abdominal segments (as well as their more familiar thoracic legs), which allow them to grip onto the edges of plant leaves as they walk around.

^Abdomen (article) is provided for informational purposes only. No expressed or implied warranties as to the validity of content.
WikiMD is not a substitute for professional advice. By accessing and using WikiMD you agree to the terms of use.
Templates etc. when imported from Wikipedia, are licensed under CC BY-SA 3.0. See full disclaimers.
Other languages:
English
Retrieved from "http://www.wikimd.org/wiki/index.php?title=Abdomen&oldid=2029768"
Category: