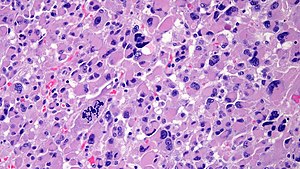 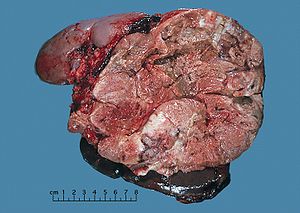 There are a number of genes that have changes (mutations) that can cause an adrenocortical carcinoma, including TP53 and IGF2.

Risk factors for adrenocortical carcinoma include having the following hereditary diseases:

A nonfunctioning adrenocortical tumor may not cause signs or symptoms in the early stages.

A functioning adrenocortical tumor makes too much of one of the following hormones:

Too much cortisol may cause:

Too much aldosterone may cause:

Too much testosterone (in women) may cause:

Men who make too much testosterone do not usually have signs or symptoms.

Too much estrogen (in women) may cause:

Too much estrogen (in men) may cause:

Physical exam and history: An exam of the body to check general signs of health, including checking for signs of disease, such as lumps or anything else that seems unusual. A history of the patient’s health habits and past illnesses and treatments will also be taken. Twenty-four-hour urine test: A test in which urine is collected for 24 hours to measure the amounts of cortisol or 17-ketosteroids. A higher than normal amount of these in the urine may be a sign of disease in the adrenal cortex.

Low-dose dexamethasone suppression test: A test in which one or more small doses of dexamethasone are given. The level of cortisol is checked from a sample of blood or from urine that is collected for three days. This test is done to check if the adrenal gland is making too much cortisol.

High-dose dexamethasone suppression test: A test in which one or more high doses of dexamethasone are given. The level of cortisol is checked from a sample of blood or from urine that is collected for three days. This test is done to check if the adrenal gland is making too much cortisol or if the pituitary gland is telling the adrenal glands to make too much cortisol.

Blood chemistry study: A procedure in which a blood sample is checked to measure the amounts of certain substances, such as potassium or sodium, released into the blood by organs and tissues in the body. An unusual (higher or lower than normal) amount of a substance can be a sign of disease.

CT scan (CAT scan): A procedure that makes a series of detailed pictures of areas inside the body, taken from different angles. The pictures are made by a computer linked to an x-ray machine. A dye may be injected into a vein or swallowed to help the organs or tissues show up more clearly. This procedure is also called computed tomography, computerized tomography, or computerized axial tomography.

Adrenal angiography: A procedure to look at the arteries and the flow of blood near the adrenal glands. A contrast dye is injected into the adrenal arteries. As the dye moves through the arteries, a series of x-rays are taken to see if any arteries are blocked.

Adrenal venography: A procedure to look at the adrenal veins and the flow of blood near the adrenal glands. A contrast dye is injected into an adrenal vein. As the contrast dye moves through the veins, a series of x-rays are taken to see if any veins are blocked. A catheter (very thin tube) may be inserted into the vein to take a blood sample, which is checked for abnormal hormone levels.

PET scan (positron emission tomography scan): A procedure to find malignant tumor cells in the body. A small amount of radioactive glucose (sugar) is injected into a vein. The PET scanner rotates around the body and makes a picture of where glucose is being used in the body. Malignant tumor cells show up brighter in the picture because they are more active and take up more glucose than normal cells do.

MIBG scan: A very small amount of radioactive material called MIBG is injected into a vein and travels through the bloodstream. Adrenal gland cells take up the radioactive material and are detected by a device that measures radiation. This scan is done to tell the difference between adrenocortical carcinoma and pheochromocytoma.

Biopsy: The removal of cells or tissues so they can be viewed under a microscope by a pathologist to check for signs of cancer. The sample may be taken using a thin needle, called a fine-needle aspiration (FNA) biopsy or a wider needle, called a core biopsy.

Treatment options include surgical removal of the tumor, which is important to achieve a good long-term outlook. Chemotherapy, specifically a drug called mitotane, can be used to try to remove any remaining cancer after surgery. Surgery Surgery to remove the adrenal gland (adrenalectomy) is often used to treat adrenocortical carcinoma. Sometimes surgery is done to remove the nearby lymph nodes and other tissue where the cancer has spread.

Adrenocortical carcinoma may be cured if treated at an early stage.

Adrenocortical carcinoma is a rare disease.

^Adrenocortical carcinoma (article) is provided for informational purposes only. No expressed or implied warranties as to the validity of content.
WikiMD is not a substitute for professional advice. By accessing and using WikiMD you agree to the terms of use.
Templates etc. when imported from Wikipedia, are licensed under CC BY-SA 3.0. See full disclaimers.
Retrieved from "http://www.wikimd.org/wiki/index.php?title=Adrenocortical_carcinoma&oldid=2080842"
Categories: