Initially the term ‘chemotherapeutic agent’ was restricted to synthetic compounds, but now since many antibiotics and their analogues have been synthesized, this criterion has become irrelevant; both synthetic and microbiologically produced drugs need to be included together. It would be more meaningful to use the term Antimicrobial agent (AMA) to designate synthetic as well as naturally obtained drugs that attenuate microorganisms.

The history of chemotherapy may be divided into 3 phases.

(a) The period of empirical use: of ‘mouldy curd’ by Chinese on boils, chaulmoogra oil by the Hindus in leprosy, chenopodium by Aztecs for intestinal worms, mercury by Paracelsus (16th century) for syphilis, cinchona bark (17th century) for fevers.

(b) Ehrlich’s phase of dyes and organometallic compounds (1890–1935): With the discovery of microbes in the later half of 19th century and that they are the cause of many diseases; Ehrlich toyed with the idea that if certain dyes could selectively stain microbes, they could also be selectively toxic to these organisms. He tried methylene blue, trypan red, etc. He developed the arsenicals—atoxyl for sleeping sickness, arsphenamine in 1906 and neoarsphenamine in 1909 for syphilis. He coined the term ‘chemotherapy’ because he used drugs of known chemical structure (that of most other drugs in use at that time was not known) and showed that selective attenuation of infecting parasite was a practical proposition. 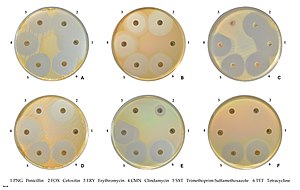 (c) The modern era of chemotherapy was ushered by Domagk in 1935 by demonstrating the therapeutic effect of Prontosil, a sulfonamide dye, in pyogenic infection. It was soon realized that the active moiety was paraamino benzene sulfonamide, and the dye part was not essential. Sulfapyridine (M & B 693) was the first sulfonamide to be marketed in 1938.

The phenomenon of antibiosis was demonstrated by Pasteur in 1877: growth of anthrax bacilli in urine was inhibited by air-borne bacteria. Fleming (1929) found that a diffusible substance was elaborated by Penicillium mould which could destroy Staphylococcus on the culture plate. He named this substance penicillin but could not purify it. Chain and Florey followed up this observation in 1939 which culminated in the clinical use of penicillin in 1941. Because of the great potential of this discovery in treating war wounds, commercial manufacture of penicillin soon started.

In the 1940s, Waksman and his colleagues undertook a systematic search of Actinomycetes as source of antibiotics and discovered streptomycin in 1944. This group of soil microbes proved to be a treasure-house of antibiotics and soon tetracyclines, chloramphenicol, erythromycin and many others followed. All three groups of scientists, Domagk, Fleming-Chain-Florey and Waksman received the Nobel Prize for their discoveries.

In the past 40 years emphasis has shifted from searching new antibiotic producing organisms to developing semisynthetic derivatives of older antibiotics with more desirable properties or differing spectrum of activity. Few novel synthetic AMAs, e.g. fluoroquinolones, oxazolidinones have also been produced.

Antimicrobial drugs can be classified in many ways:

Antibiotics save lives, but any time antibiotics are used, they can cause side effects and lead to antibiotic resistance. In U.S. doctors’ offices and emergency departments, at least 47 million antibiotic prescriptions each year are unnecessary, which makes improving antibiotic prescribing and use a national priority, according to the CDC.

Antibiotic resistance is one of the biggest public health challenges of our time. Each year in the U.S., at least 2.8 million people get an antibiotic-resistant infection, and more than 35,000 people die, according to the CDC.

Penicillin, the first commercialized antibiotic, was discovered in 1928 by Alexander Fleming. Ever since, there has been discovery and acknowledgement of resistance alongside the discovery of new antibiotics. In fact, germs will always look for ways to survive and resist new drugs. More and more, germs are sharing their resistance with one another, making it harder for us to keep up.

Antibiotic stewardship can be used in all health care settings in which antibiotics are prescribed and remains a cornerstone of efforts aimed at improving antibiotic-related patient safety and slowing the spread of antibiotic resistance.

The goal of antibiotic stewardship is to maximize the benefit of antibiotic treatment while minimizing harm both to individual persons and to communities.

^Antibiotic (article) is provided for informational purposes only. No expressed or implied warranties as to the validity of content.
WikiMD is not a substitute for professional advice. By accessing and using WikiMD you agree to the terms of use.
Templates etc. when imported from Wikipedia, are licensed under CC BY-SA 3.0. See full disclaimers.
Retrieved from "http://www.wikimd.org/wiki/index.php?title=Antibiotic&oldid=2368200"
Categories: