Atopic dermatitis is a long-lasting disease that affects the skin. It is not contagious.

Atopic dermatitis is the most common of the many types of eczema, which is a general term for disorders that produce skin inflammation.

What happens in atopic dermatitis?

If you have atopic dermatitis, you lose moisture from the outer layer of the skin. The skin then becomes very dry and has reduced protective abilities. This makes your skin more likely to become infected by bacteria or viruses.

In atopic dermatitis, the skin becomes extremely itchy. Scratching leads to redness, swelling, cracking, “weeping” clear fluid, crusting, and scaling. In most cases, there are periods of time when the disease is worse (called exacerbations or flares) followed by periods when the skin improves or clears up entirely (called remissions).

Who Gets Atopic Dermatitis?

Atopic dermatitis is very common and occurs equally in males and females. The disorder most often begins in infancy and childhood.

In infants, atopic dermatitis typically begins around 6 to 12 weeks of age. It may first appear around the cheeks and chin as a patchy facial rash, which can progress to red, scaling, oozing skin that may become infected. Other areas, such as the inner and outer parts of the arms and legs, may also be affected once the infant begins crawling.

In childhood, the rash tends to occur behind the knees and inside the elbows; on the sides of the neck; around the mouth; and on the wrists, ankles, and hands. Often the rash begins with small, round bumps that become hard and scaly when scratched. The skin around the lips may be inflamed, and constant licking of the area may lead to small, painful cracks in the skin around the mouth.

In some children, the disease goes into remission for a long time, only to come back at the onset of puberty when hormones, stress, and the use of irritating skin care products or cosmetics may cause the disease to flare. Even if the disease improves or disappears, the skin often remains dry and easily irritated.

Although a number of people who developed atopic dermatitis as children also experience symptoms as adults, it is also possible for the disease to show up first in adulthood. The pattern in adults is similar to that seen in children; that is, the disease may be widespread or limited to only a few parts of the body. Onset after age 30 is is often caused by environmental factors such as: 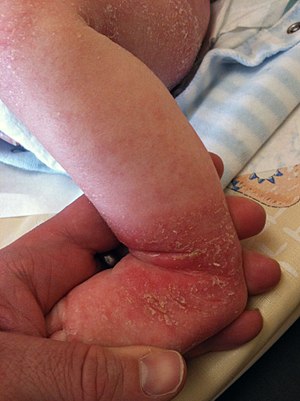 The most common symptoms of atopic dermatitis include:

Other symptoms depend upon the amount of scratching and whether there are skin infections. Some symptoms may also be seen in other types of skin disorders. Common skin features of atopic dermatitis include:

No one knows what causes atopic dermatitis. Children are more likely to develop the disorder if a parent has had it or another disease like asthma or hay fever. This indicates that genetics are involved. Environmental factors can bring on symptoms of atopic dermatitis at any time in affected people.

Atopic dermatitis is also associated with malfunction of the body’s immune system, which helps fight off bacteria and viruses. The immune system can become misguided and create inflammation in the skin, even if there isn’t a major infection.

In the past, doctors thought that atopic dermatitis was caused by an emotional disorder. Scientists now know that emotional factors, such as stress, can make the condition worse, but they do not cause the disease.

To diagnose you with atopic dermatitis, your doctor may:

Your doctor may need to see you several times to make an accurate diagnosis and to rule out other diseases and conditions that might cause skin irritation.

The two main goals in treating atopic dermatitis are healing the skin and preventing flares. You should note any changes in the skin’s condition in response to treatment to identify which treatments seem to work best.

Dermatology and Rheumatologic diseases A - Z

Find something you can improve? Join WikiMD as an an editor and help improve this page or others.

Quick links: Medicine Portal | Encyclopedia‏‎‏‎ | Gray's Anatomy‏‎ | Topics‏‎ |‏‎ Diseases‏‎ | Drugs | Wellness | Obesity‏‎ | Metabolic syndrome | Weight loss*
Disclaimer: The entire contents of WIKIMD.ORG are for informational purposes only and do not render medical advice or professional services. If you have a medical emergency, you should CALL 911 immediately! Given the nature of the wiki, the information provided may not be accurate, misleading and or incorrect. Use the information on this wiki at your own risk! See full Disclaimer.
Link to this page: <a href="http://www.wikimd.org/wiki/Atopic_dermatitis">Atopic dermatitis</a>