A benign tumor is a mass of cells (tumor) that lacks the ability to invade neighboring tissue (spread throughout the body) or metastasize. However, they can sometimes be quite large. When removed, benign tumors usually do not grow back, whereas malignant tumors sometimes do. Unlike most benign tumors elsewhere in the body, benign brain tumors can be life threatening.[1] Benign tumors generally have a slower growth rate than malignant tumors and the tumor cells are usually more differentiated (cells have normal features).[2][3][4] They are typically surrounded by an outer surface (fibrous sheath of connective tissue) or remain with the epithelium.[5] Common examples of benign tumors include moles and uterine fibroids.

Although benign tumors will not metastasize or locally invade tissues, some types may still produce negative health effects. The growth of benign tumors produces a "mass effect" that can compress tissues and may cause nerve damage, reduction of blood to an area of the body (ischaemia), tissue death (necrosis) and organ damage. The health effects of the tumor may be more prominent if the tumor is within an enclosed space such as the cranium, respiratory tract, sinus or inside bones. Tumors of endocrine tissues may overproduce certain hormones, especially when the cells are well differentiated. Examples include thyroid adenomas and adrenocortical adenomas.[2]

Although most benign tumors are not life-threatening, many types of benign tumors have the potential to become cancerous (malignant) through a process known as tumor progression.[6] For this reason and other possible negative health effects, some benign tumors are removed by surgery.[7]

Benign tumors are very diverse, and may be asymptomatic or may cause specific symptoms depending on their anatomic location and tissue type. They grow outwards, producing large rounded masses, which can cause what is known as a "mass effect". This growth can cause compression of local tissues or organs, which can cause many effects such as blockage of ducts, reduced blood flow (ischaemia), tissue death (necrosis) and nerve pain or damage.[2] Some tumors also produce hormones that can lead to life-threatening situations. Insulinomas can produce large amounts of insulin leading to hypoglycemia.[8][9] Pituitary adenomas can cause elevated levels of hormones such as growth hormone and insulin-like growth factor-1, which cause acromegaly; prolactin; ACTH and cortisol, which cause Cushings disease; TSH, which causes hyperthyroidism; and FSH and LH.[10] Bowel intussusception can occur with various benign colonic tumors.[11] Cosmetic effects can be caused by tumors, especially those of the skin, possibly causing psychological effects on the person with the tumor.[12] Vascular tumors can bleed, which in some cases can be substantial, leading to anemia.[13]

PTEN hamartoma syndrome comprises four distinct hamartomatous disorders characterised by genetic mutations in the PTEN gene; Cowden syndrome, Bannayan-Riley-Ruvalcaba syndrome, Proteus syndrome and Proteus-like syndrome. Although they all have distinct clinical features, the formation of hamartomas is present in all four syndromes. PTEN is a tumor suppressor gene that is involved in cellular signalling. Absent or dysfunctional PTEN protein allows cells to over-proliferate, causing hamartomas.[14]

Endoscopic image of sigmoid colon of a patient with familial adenomatous polyposis.

Familial adenomatous polyposis (FAP) is a familial cancer syndrome caused by mutations in the APC gene. In this disorder adenomatous polyps are present in the colon that invariably progress into colon cancer.[20] The APC gene is a tumor suppressor and its product is involved in many cellular processes. Inactivation of the APC gene leads to a buildup of a protein called β-catenin, which activates two transcription factors; T-cell factor (TCF) and lymphoid enhancer factor (LEF). These cause the upregulation of many genes involved in cell proliferation, differentiation, migration and apoptosis (programmed cell death), causing the growth of benign tumors.[21]

Tuberous sclerosis complex (TSC) is an autosomal dominant genetic disorder caused by mutations in the genesTSC1 and TSC2, which produce the proteins hamartin and tuberin, respectively. This disorder presents with many benign hamartomatous tumors including angiofibromas, renal angiomyolipomas, pulmonary lymphangiomyomatosis. Tuberin and hamartin inhibit the mTOR protein in normal cellular physiology and the inactivation of the TSC tumor suppressors causes an increase in mTOR activity. This leads to the activation of genes and the production of proteins that increase cell growth.[22][23][24]

Von Hippel-Lindau disease is a dominantly inherited cancer syndrome that massively increases the risk of various tumors including benign hemangioblastomas and malignant pheochromocytomas, renal cell carcinomas, pancreatic endocrine tumors and endolymphatic sac tumors. It is caused by genetic mutations in the Von Hippel–Lindau tumor suppressor gene. The VHL protein (pVHL) is involved in cellular signalling in oxygen starved (hypoxic) cells. One role of pVHL is to cause the cellular degradation of another protein, HIF1α. Dysfunctional pVHL leads to accumulation of HIF1α, which in turn activates the production of several genes involved in cell growth and blood vessel production (VEGF, PDGFβ, TGFα and erythropoietin).[25] 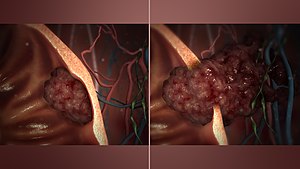 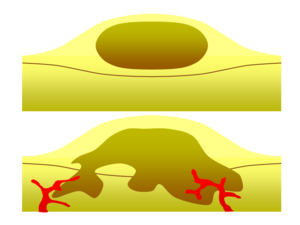 Diagram showing two epithelial tumors. The upper tumor is a benign tumor that is non-invasive. Benign tumors are usually round in shape and encapsulated by fibrous connective tissue. The lower picture depicts a malignant tumor. It is irregularly shaped, vascular, and it is invasive, crossing the basement membrane.

Tumors are formed by carcinogenesis, a process in which cellular alterations lead to the formation of cancer. Multistage carcinogenesis involves the sequential genetic or epigenetic changes to a cell's DNA, where each step produces a more advanced tumor. It is often broken down into three stages; initiation, promotion and progression, and several mutations may occur at each stage. Initiation is where the first genetic mutation occurs in a cell. Promotion is the clonal expansion (repeated division) of this transformed cell into a visible tumor that is usually benign. Following promotion, progression may take place where more genetic mutations are acquired in a sub-population of tumor cells. Progression changes the benign tumor into a malignant tumor.[6][30] A prominent and well studied example of this phenomenon is the tubular adenoma, a common type of colon polyp which is an important precursor to colon cancer. The cells in tubular adenomas, like most tumors which frequently progress to cancer, show certain abnormalities of cell maturation and appearance collectively known as dysplasia. These cellular abnormalities are not seen in benign tumors that rarely or never turn cancerous, but are seen in other pre-cancerous tissue abnormalities which do not form discrete masses, such as pre-cancerous lesions of the uterine cervix. Some authorities[who?] prefer to refer to dysplastic tumors as "pre-malignant", and reserve the term "benign" for tumors which rarely or never give rise to cancer.[citation needed]

Benign neoplasms are typically but not always composed of cells which bear a strong resemblance to a normal cell type in their organ of origin. These tumors are named for the cell or tissue type from which they originate, followed by the suffix "-oma" (but not -carcinoma, -sarcoma, or -blastoma, which are generally cancers). For example, a lipoma is a common benign tumor of fat cells (lipocytes), and a chondroma is a benign tumor of cartilage-forming cells (chondrocytes). Adenomas are benign tumors of gland-forming cells, and are usually specified further by their cell or organ of origin, as in hepatic adenoma (a benign tumor of hepatocytes, or liver cells). Teratomas contain many cell types such as skin, nerve, brain and thyroid, among others, because they are derived from germ cells.[4] Hamartomas are a group of benign tumors that have relatively normal cellular differentiation but the architecture of the tissue is disorganised.[22] There are a few cancers with 'benign-sounding' names which have been retained for historical reasons, including melanoma (a cancer of pigmented skin cells, or melanocytes) and seminoma (a cancer of male reproductive cells).[32] Skin tags, vocal chord polyps and hyperplastic polyps of the colon are often referred to as benign but they are actually overgrowths of normal tissue rather than neoplasms.[4]

Some benign tumors need no treatment; others may be removed if they cause problems such as seizures, discomfort or cosmetic concerns. Surgery is usually the most effective approach and is used to treat most benign tumors. In some case other treatments may be of use. Adenomas of the rectum may be treated with sclerotherapy, a treatment in which chemicals are used to shrink blood vessels in order to cut off the blood supply.[13] Most benign tumors do not respond to chemotherapy or radiation therapy, although there are exceptions; benign intercranial tumors are sometimes treated with radiation therapy and chemotherapy under certain circumstances.[33][34] Radiation can also be used to treat hemangiomas in the rectum.[13] Benign skin tumors are usually surgically resected but other treatments such as cryotherapy, curettage, electrodesiccation, laser therapy, dermabrasion, chemical peels and topical medication are used.[35][36]

Quick links: Medicine Portal | Encyclopedia‏‎‏‎ | Gray's Anatomy‏‎ | Topics‏‎ |‏‎ Diseases‏‎ | Drugs | Wellness | Obesity‏‎ | Metabolic syndrome | Weight loss*
Disclaimer: The entire contents of WIKIMD.ORG are for informational purposes only and do not render medical advice or professional services. If you have a medical emergency, you should CALL 911 immediately! Given the nature of the wiki, the information provided may not be accurate, misleading and or incorrect. Use the information on this wiki at your own risk! See full Disclaimer.
Link to this page: <a href="http://www.wikimd.org/wiki/Benign_tumor">Benign tumor</a>