Cystic fibrosis is an inherited disease that causes thick, sticky mucus to build up in the lungs and digestive tract. It is the most common type of chronic lung disease in children and young adults, and may result in early death.

Cystic fibrosis (CF) is caused by a defective gene which tells the body to produce abnormally thick and sticky fluid, called mucus. This mucus builds up in the breathing passages of the lungs and the pancreas, the organ that helps to break down and absorb food. This collection of sticky mucus results in life-threatening lung infections and serious digestion problems. The disease may also affect the sweat glands and a man's reproductive system.

Millions of Americans carry the defective CF gene, but do not have any symptoms. That's because a person with CF must inherit two defective CF genes -- one from each parent. An estimated 3% to 10% of Caucasians have the CF gene. The disease is the most common, deadly, inherited disorder affecting Caucasians in the United States. It's more common among those of Northern or Central European descent.

Most children are diagnosed with CF by their 1st birthday. A small number, however, are not diagnosed until age 18 or older. These patients usually have a milder form of the disease.

Because there are more than 1,000 mutations of the CF gene, symptoms differ from person to person. But in general they include: 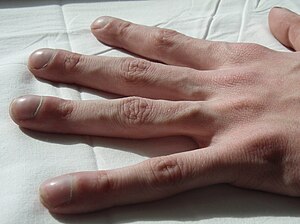 In May 2005, the U.S. Food and Drug Administration approved the first DNA-based blood test to help detect CF. The test looks for variations in a gene known to cause the disease. Other tests use to diagnose CF include:

An early diagnosis of CF and a comprehensive treatment plan can improve both survival and quality of life. Specialty clinics for cystic fibrosis may be helpful and can be found in many communities.

Disease registries now show that 40% of patients with cystic fibrosis are over age 18.

Today, the average life span for those who live to adulthood is approximately 35 years, a dramatic increase over the last three decades. 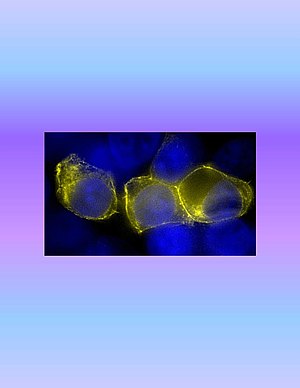 Cystic fibrosis is a rare disease.

^Cystic fibrosis (article) is provided for informational purposes only. No expressed or implied warranties as to the validity of content.
WikiMD is not a substitute for professional advice. By accessing and using WikiMD you agree to the terms of use.
Templates etc. when imported from Wikipedia, are licensed under CC BY-SA 3.0. See full disclaimers.
Other languages:
English
Retrieved from "http://www.wikimd.org/wiki/index.php?title=Cystic_fibrosis&oldid=2053211"
Category: