Gonorrhea is a sexually transmitted disease (STD) that can infect both men and women. It can cause infections in the genitals, rectum, and throat. It is a very common infection, especially among young people ages 15-24 years.

Some men with gonorrhea may have no symptoms at all. However, men who do have symptoms, may have:

Rectal infections may either cause no symptoms or cause symptoms in both men and women that may include: 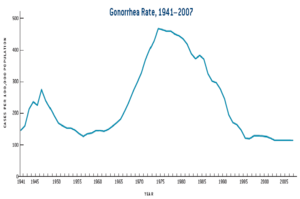 Gonorrhea can be cured with the right treatment.