The lungs are the essential organs of respiration.

Lungs are two in number, placed one on either side within the thorax, and separated from each other by the heart and other contents of the mediastinum.

How do lungs work?

In addition to the lungs, your respiratory system includes the trachea (windpipe), muscles of the chest wall and diaphragm, blood vessels, and tissues that make breathing and gas exchange possible. Your brain controls your breathing rate (how fast or slow you breathe), by sensing your body’s need for oxygen and its need to get rid of carbon dioxide.

Healthy lifestyle habits, such as physical activity and not smoking, can help prevent lung injury and disease.

Explore this Health Topic to learn more about how the lungs work, our role in research and clinical trials, and where to find more information.

The Respiratory System- How the Lungs Work

Your lungs lie on each side of your heart inside your chest cavity. The right lung is divided into three lobes (sections), and the left lung is divided into two lobes. Your left lung is slightly smaller than your right lung, since your heart takes up some space on the left side. When you breathe in, air enters your airways and travels down into the alveoli (air sacs) in your lungs. This is where gas exchange takes place.

How does breathing work?

Breathing air into your lungs. When you breathe in, air enters your nose and/or mouth, and passes into your windpipe, also called the trachea. The windpipe divides into two bronchial tubes, or bronchi, then branches into smaller bronchioles. The bronchioles end in tiny air sacs, called alveoli. Here the oxygen you inhale passes into the bloodstream, and carbon dioxide from your body passes out of the bloodstream into the air in your lungs. The carbon dioxide is expelled from your body when you exhale. Medical Animation Copyright © 2020 Nucleus Medical Media Inc. All rights reserved.external link 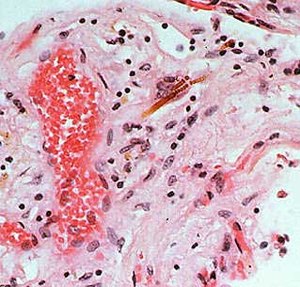 Air comes into your body

Air first enters your body through your nose or mouth, which moistens and warms the air since cold, dry air can irritate your lungs. The air then travels past your voice box and down your windpipe. Rings of tough tissue, called cartilage, acts as a support to keep the bronchial tubes open.

Inside your lungs, the bronchial tubes branch into thousands of thinner tubes called bronchioles. The bronchioles end in clusters of tiny air sacs called alveoli.

Your lungs have about 150 million alveoli. Normally, your alveoli are elastic, meaning that their size and shape can change easily. Alveoli are able to easily expand and contract, because their insides are coated with a substance called surfactant. Surfactant reduces the work it takes to breathe by helping the lungs inflate more easily when you breathe in and preventing the lungs from collapsing when you breath out.

Each of these alveoli is made up of a mesh of tiny blood vessels called capillaries. The capillaries connect to a network of arteries and veins that move blood through your body.

Blood low in oxygen flows through the lungs

The pulmonary artery and its branches deliver blood to the capillaries that surround the alveoli. This blood is rich in carbon dioxide and low in oxygen.

Oxygen flows into your blood

How does my body protect the airways from food or bacteria?

When you swallow, a thin flap of tissue called the epiglottis covers your windpipe. Along with coughing and gag reflexes, the epiglottis prevents food and drink from entering the airway. The epiglottis also helps direct food into your esophagus, which is the pipe that goes to your stomach.

Except for the mouth and some parts of the nose, the airways have cells that make mucus, a sticky substance that coats the walls of the airways. Other cells in the airways have hairlike structures called cilia. The cilia and mucus trap germs and other particles that enter your airways when you breathe in air. The cilia then sweep the mucus-coated germs up to the nose or mouth. From there, the germs are swallowed, coughed, or sneezed out of the body.

The lungs are surrounded by the pleura, a membrane with two layers. The space between these two layers is called the pleural cavity. A slippery liquid called pleural fluid acts as a lubricant to reduce friction during breathing.

The muscles used for breathing

The lungs are like sponges; they cannot expand (get bigger) on their own. Muscles in your chest and abdomen contract (tighten) to create a slight vacuum around your lungs. This causes air to flow in. When you exhale, the muscles relax and the lungs deflate on their own, much like an elastic balloon will deflate if left open to the air.

The breathing muscles include the:

Damage to the nerves in the upper spinal cord can interfere with the movement of your diaphragm and other muscles in your chest, neck, and abdomen. This can happen due to a spinal cord injury, a stroke, or a degenerative disease such as muscular dystrophy. The damage can cause respiratory failure. Ventilator support or oxygen therapy may be necessary to maintain oxygen levels in the body and protect the organs from damage.

Conditions that affect the respiratory system Damage, infection, or inflammation in the lungs or airways or both, can lead to the following conditions.

Exposure to cigarette smoke, air pollutants, or other substances can damage the airways, causing disease of the airways or making a disease more severe.

Join WikiMD as a freelancer or paid editor and help improve the page Lungs or others.
Retrieved from "http://www.wikimd.org/wiki/index.php?title=Lungs&oldid=2115042"
Categories: