Police are a group of people whose job it is to enforce laws, help with emergencies, solve crimes and protect property. A person who carries out this duty is known as a police officer. They work out of a police station. Police are trained in first aid and rescue, because police officers are often one of the first people to get to a place where people are sick or injured, such as a car accident, or a fire.

A police agency may be called a police force, police department, police service, constabulary, civil guard or protective service. A gendarmerie is a police force that is part of the military, although its members rarely do actual military work.

The police deal with:

Not all countries use the same words to describe these groups. In the United Kingdom, for example, patrol officers form the "uniform branch", while detectives work within the CID ("Criminal Investigation Department").

Police uniforms, equipment and methods vary depending on the country. In some places, groups of police train for special jobs such as dealing with riots or dealing with highly dangerous criminals. 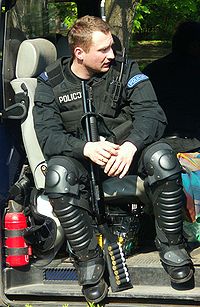 A Polish police officer with some of his equipment

Some countries have two or more levels of police forces. For example, most policing in Australia is carried out by the six state police forces, but there is also the Australian Federal Police who police the whole country. Germany has a similar system. The United Kingdom and Switzerland have many local police forces and several national agencies, but no actual national police force. In Canada, local governments can choose to either run their own police force or give the job to a bigger one. So most Canadian cities have their own police, while most rural areas are policed by the Royal Canadian Mounted Police, which is also the national police.

Worldwide, police are a small percentage of the number of people they serve. On average there are 303.3 police officers per 100,000 people.[1]

Officers communicate using radio devices. The radios can be on both the uniform and in the patrol vehicle.

Quick links: Medicine Portal | Encyclopedia‏‎‏‎ | Gray's Anatomy‏‎ | Topics‏‎ |‏‎ Diseases‏‎ | Drugs | Wellness | Obesity‏‎ | Metabolic syndrome | Weight loss*
Disclaimer: The entire contents of WIKIMD.ORG are for informational purposes only and do not render medical advice or professional services. If you have a medical emergency, you should CALL 911 immediately! Given the nature of the wiki, the information provided may not be accurate, misleading and or incorrect. Use the information on this wiki at your own risk! See full Disclaimer.
Link to this page: <a href="http://www.wikimd.org/wiki/Police">Police</a>